Hoffa pic shows you reap what you sow

Scorsese threw out all the stops with his latest mob epic, The Irishman. He assembled his dream cast of several notable powerhouse actors and got Netflix to offer a superhero movie's financing to this supposedly true story of Frank Sheeran, friend and associate of Jimmy Hoffa, who claimed that he was the one who shot the union leader in 1975.
Nov 22, 2019 2:00 PM By: Scott Hayes 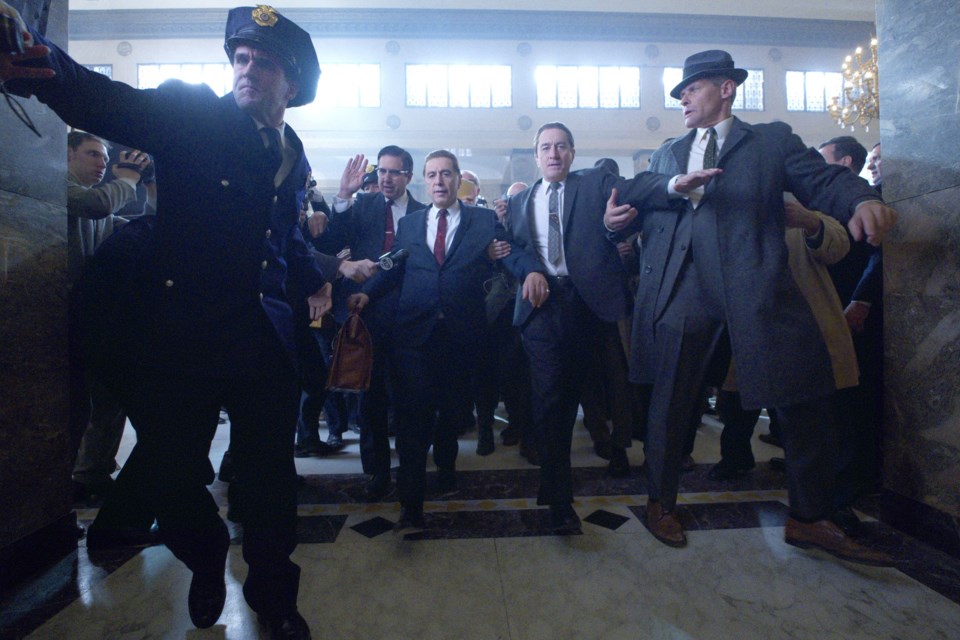 I know what you're thinking: “Oh goodie ... another mob movie by Martin Scorsese? Pass.”

But wait! This isn’t just another mob movie by Martin Scorsese. If you’ve ever wanted to know what happened to Jimmy Hoffa – better yet, learn more about him and who was close to him – then The Irishman is for you. Nobody does gangster films better and more thoroughly than he, especially when he has his favourite collaborators on the team. Here, he has perhaps the greatest dream cast of any of his mob movies, with Robert De Niro, Al Pacino, Harvey Keitel and even Joe Pesci coming out of retirement to play a key role.

The Irishman tells the supposedly true story of Frank ‘The Irishman” Sheeran, an enforcer type who became connected with high-ranking mobsters, which led to his long-time friendly and business association with Hoffa. Hoffa, for the uninitiated, was the very powerful head of the Teamsters Union in the United States. He disappeared in 1975 and no official cause of death was ever determined.

Investigative writer Charles Brandt’s thoroughly researched memoir I Heard You Paint Houses paints a portrait of the events preceding and including that fateful day in American history. There’s a lot of speculation and skepticism about the veracity level here, but it sure is a fine tale. The real Sheeran apparently offered a deathbed confession of being Hoffa’s murderer, but this film does at least offer some reassurance about what might have actually happened to Hoffa.

Even more importantly, it gives a very vivid look into Sheeran’s life and what became of it. He was close to some very important people, but at what cost? The film is told as a retrospective of sorts as we start with Sheeran (played by De Niro) as an old and infirm man riddled with regrets in a nursing home. Say what you will about gangsters, but they are still people; they still have families and feelings.

This is that movie.

While bloody and loud for much of its screentime, it’s also as poetic and tragic as you’d expect. Frankly, with the casting and the subject matter, it could easily be considered Scorsese’s magnum opus and I do mean magnum, as it clocks in at 3 hours 30 minutes, the director’s longest ever. It’s an extensive, exhaustive, and sometimes exhausting enterprise. Al “Screamin’” Pacino is perfect as the loud, abrasive Hoffa, while Pesci plays the more sedate and level mob head Russell Bufalino. The distinguished Keitel takes a much smaller part as another gangland associate, Angelo Bruno, while the stellar cast also includes Anna Paquin proving her worth with little dialogue and Edmonton-born Gary Basaraba as Hoffa’s one-time union protégé-turned-nemesis Frank Fitzsimmons. Heck, even Ray Romano does a fine job here.

This is all a tribute to Scorsese’s genius. Above all, he doesn't just make you like unsympathetic characters; he makes you love them. What's even more masterful than that is he then knows how to make you sympathize with the greatly unsympathetic mobsters that populate his films. You, as the viewer, might otherwise pass moral judgment while offering mistaken affection to the devils herein, and you might not even notice. That's just one of the reasons why he's so good. Also, he has a fine mastery of all of the tools in the filmmaker’s toolbox.

But wait! This is my one big complaint. Because all of the main actors are in their 70s having to play characters starting from their 30s, there was a real need for CG work, what many would call ‘youthification’. That’s one of the reasons why the production budget went north of $150 million. It’s pretty effective ... for the most part.

The only detractor is that the special effects are sometimes of not the highest quality, taking you out of the movie. Turning septuagenarians into tricenarians is one thing (although sometimes they come off looking like they’re right out of the The Polar Express) but other effects including blood splatter are about as fake as what you might see in Sharknado. Ouch. That’s a scratch for Netflix on this one to offer such a blight on the career of Scorsese, especially on this epic.