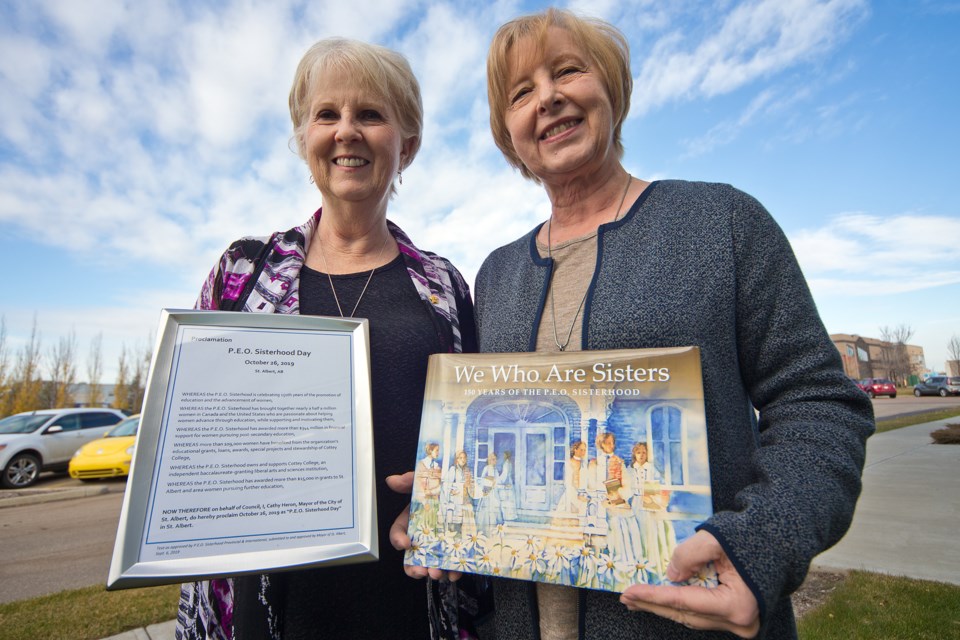 President Doris Vandersteen, left and Vice-President Diane Charles of the St. Albert chapter of the PEO Sisterhood will be celebrating the 150th anniversary of the organization this weekend. The group raises money to give to young women in the community for scholarships. CHRIS COLBOURNE/St. Albert Gazette

One of the continent’s biggest secrets in female empowerment is celebrating its 150th anniversary this weekend and it’s using the occasion to leap forward in a more public manner. A special event is being held on Saturday with the apt theme of ‘We have come a long way, now watch us grow.’ That means that if you haven’t yet heard of the P.E.O. Sisterhood and what it does, those days should soon be over.

“It's a long-term organization and not very well known in many places, not just St. Albert,” said Doris Vandersteen, synopsizing the group’s history. “It began in a college in the U.S. as a sorority and then grew out of that to become a North America-wide women's organization to promote post-secondary education and the advancement of women.”

PEO stands for Philanthropic Educational Organization, which is the group’s larger objective. It rose out of a small collective of women in Iowa but has since expanded throughout the United States and Canada, with the local chapter opening up in 2002. All chapters work to offer financial assistance through scholarships, grants and loans to thousands of young women to further their work on a wide variety of social issues.

Through the years, more than 100,000 women have benefited from this assistance. Two years ago, Sydney Parkinson joined that group of beneficiaries. She was cyberbullied in high school, which made her realize that she wanted to take action in helping others in similar situations. Her PEO scholarship helped her do just that by affording her the opportunity to speak to high school groups of students, and groups of teachers and administrators as well.

“I decided that I was going to try and put a positive spin on a negative situation and try and help people that were facing the same problems,” she said.

“I’m just trying to start the conversation. There's a lot of stigma, I think, around cyberbullying. People don't necessarily know that there are other people going through it. I just wanted to shed some light that lots of people are facing the problem.”

This work continues, even as Parkinson is in the middle of her psychology studies at Grant MacEwan University. She expressed how deeply she appreciated the PEO scholarship but moreso the sisterhood of support that she gained from her involvement with the organization.

Chapter S, as the local St. Albert group is known, is hosting a celebration and luncheon Saturday at Red Willow Place. Mayor Cathy Heron will issue a proclamation marking October 26 as P.E.O. Sisterhood Day. St. Albert Public school trustee and PEO member Cheryl Dumont will be the special guest speaker. She will talk on the subject of a woman's perspective on ‘How Did We Get Here and What Now.’ Tickets are $30.

Vandersteen hopes that this event marks a moment of change for PEO locally and internationally as well.

“We've made a tremendous amount of progress in terms of equality in so many ways, and yet we recognize that we still have work to do. We still need to be ever vigilant to pursue equality for all persons.”