Though regular food tours are cancelled because of COVID-19, guided tours in Edmonton are still available this summer
Jul 17, 2020 11:15 AM By: Lucy Haines 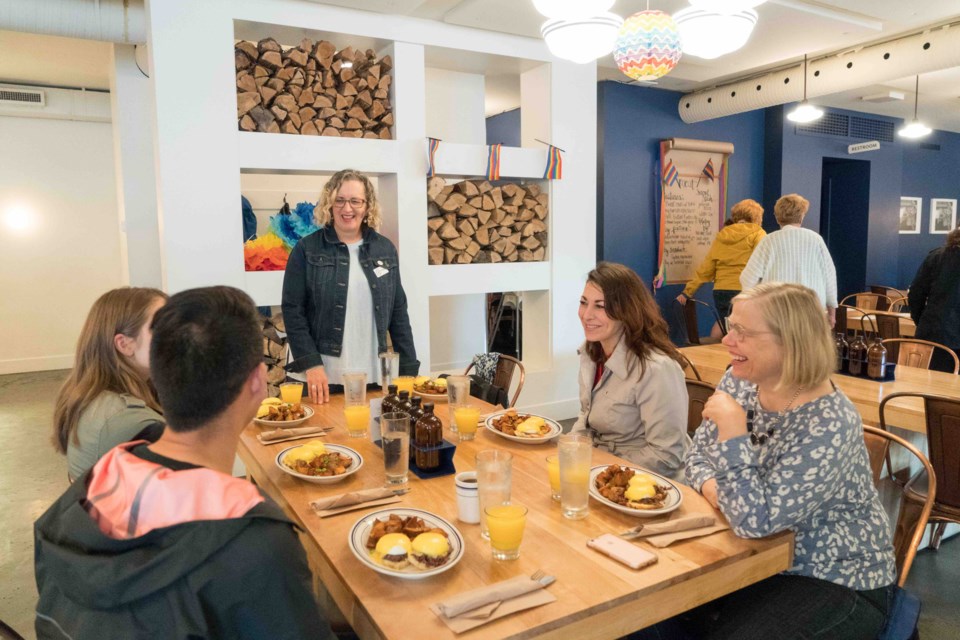 Karen Anderson leads a culinary tour through Edmonton's Old Strathcona neighbourhood. Though regular food tours are cancelled because of COVID-19, guided tours of the area are still available this summer. SUPPLED/Karen Anderson

In mid-March, Karen Anderson was gearing up for the 15th anniversary season of Alberta Food Tours.

The walking, tasting experience had built a line-up of about 14 varied culinary-themed tours during the peak season in Edmonton, Calgary, Canmore and Banff.

The business capped off 2019 on a high note when two of its tours – Inglewood Edibles: Made by Mavericks (Calgary) and Eat the Castle (Banff) – were named Canadian Signature Experiences by Tourism Canada: must-see, must-do ventures when in those cities.

That stamp of approval gave a higher profile to what was already an Alberta success story, one that had hosted 3,000 guests on public and private tours and employed about 20 tour guides in its short history.

Then COVID-19 happened, and – like most businesses deemed non-essential – Anderson's made-in Alberta venture ground to a halt.

"We had a really good team, but had to lay off pretty much everyone. We were set to grow, and had landed contracts with American tour companies too, which would've meant a reliable base of business," said Anderson.

The food writer and cookbook author (A Spicy Touch, and Food Artisans of Alberta) is philosophical about the forced change. "It's 2020 and the world has changed, so we are changing with it. It's time to pivot."

The company CEO first had to cancel a three-night fall food tour of southern Alberta.

"It's going to be a long time before bus trips come back", Anderson said.

Instead, she's focused on staying connected to her newsletter subscribers with a monthly post of chapters that will make up her next book.

Alberta Food Tours is now offering Hire A Guide services in its four sites – Banff, Canmore and at the Inglewood tour in Calgary and in Old Strathcona in Edmonton.

Working within Phase 2 requirements of the Alberta relaunch, guides take groups of up to six people on a two-and-a-half-hour tour through an area, offering historical trivia, fun anecdotes and pointing out food favourites – burgers, coffee, chocolate, beer, ice cream – whatever. It's not quite the same, Anderson admits, because food isn't included in the tour price for now, and guides cannot sit in with guests on any restaurant or snack stops.

"But it's a bespoke tour – we can customize it to whatever date, time and interests the visitors have," she said. "On a recent tour through Edmonton's Old Strathcona, our guide Howard showed the group some insider hot spots. It's like when family comes to town and you show them your favourite haunts."

Whether to enjoy visiting family or just as a tourist in your own city, St. Albert residents can enjoy walking tours here too.

In past years, the city has seen culinary tours as part of the Dig In Festival and while that's not happening this year, the Founders' Walk self-guided historic tour remains a popular option.

With 27 spots featured on an interactive story map, (from the Clock tower to the Healing Garden to Father Lacombe Chapel), the tour through St. Albert's core area "highlights St. Albert's rich history and allows residents and visitors a chance to walk back in time," according to Cory Sinclair with the City of St. Albert.

Other spots now open include the Musée Héritage Museum, the Art Gallery of St. Albert and the Grain Elevator Park. Don't forget the St. Albert Farmers' Market, which runs every Saturday in the parking lot at Servus Credit Union Place, and the BLESS platform at Big Lake – a great destination for a morning walk and wildlife-spotting.