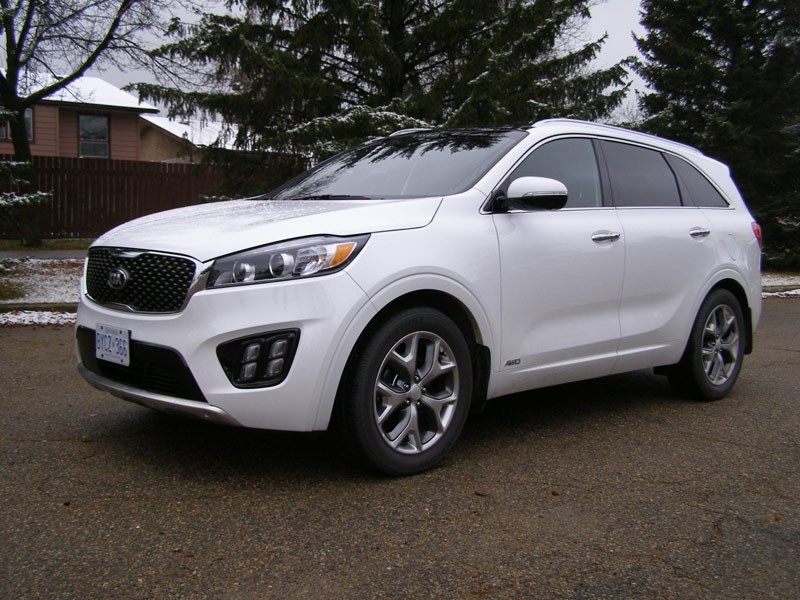 Kia’s largest SUV has been refreshed and it’s worth investigating for anyone shopping the $40,000 plus price range. The 2016 Sorento is offered as a five or a seven-seater and offers a driving experience equal to, if not better than, similar vehicles from Japan and North America. Clearly Kia is no longer positioned as a manufacturer of basic vehicles. Some models like Sorento have moved up-market and that trend will continue. My Sorento SX+ tester is the top-of-the-line model with a gorgeous interior, Napa leather and refined performance and comfort. Sadly, there is only one interior colour for now – black. A power liftgate is available; no need to wave your foot underneath, just stand at the rear for a moment with the key fob and wait for the liftgate to rise.

Positive impressions start inside the Sorento where the Napa leather, part of the SX+ package, is soft-as-glove leather. The entire instrument panel and most of its controls are pleasing to the touch and is accented in piano black. The switchgear is uncomplicated and the infotainment system one of the nicest I’ve seen in a new vehicle. The informational display – fuel economy, car setup, odometer readings, etc. is intuitive and easy to read. A “text page” button on the steering wheel scrolls the major data categories horizontally across the screen and then, should you want to delve deeper into that particular field, a small wheel right below it toggles vertically through the specific information. The stereo system by Harmon puts out a very good sound equal to many other high-end systems.

The seats are comfortable, side mirrors and windows large enough for a clear view in all directions. The rear seats fold completely flat and with a roofline that does not curve down toward the rear, cargo volume is great – 2,082 litres behind the front seats with the rear seat backs down.

On the centre console, the Drive Mode button allows the driver to toggle between Normal, Eco and Sport, which modifies steering input, engine performance and transmission mapping. It does not adjust the suspension. As you would expect, Normal is just that, while Eco delivers less fuel and adjusts ignition timing for improved fuel economy. In Sport the timing is advanced for more power. This brings me to the standard V6 engine.

The 3.3L V6 is smooth and boasts more horsepower – 290-h.p. for the V6 versus 240 for the 2.0-litre T-GDI found in lesser models – but the turbocharged four has more torque (260 pound-feet versus 252 lb.-ft. for the V6). However the V6 has a greater towing capacity – 5,000 pounds versus the 2.0-litre’s 3,500 lbs. I don’t consider the six-speed automatic transmission to be a detriment to the Sorento. Some journalists might differ pointing out the growing number of cars and other vehicles now offering seven, eight or even nine forward speeds. Perhaps Kia is working on developing such a transmission. For now, it’s not an issue. Fuel economy is rated by EnerGuide at 13.4L/100 km in the city and 9.4L/100 km on the highway. I didn’t do much highway driving so on city streets I got 14.1L/100 km.

The AWD system is hydraulically actuated with a normal front/rear torque split of 50:50. At highway speeds, the system sends up to 95 per cent of torque to the front. In bad conditions such as ice, snow and loose surfaces there is a lockout button on the centre console that sends equal grip front and rear almost like four-wheel-drive. When speed increases beyond 30 km/h, the system automatically disengages. The Sorento has a very good ride and tracks very well through deep snow. Road noise entering the passenger cabin is at bay with thicker glass and plenty of insulation.

Kia has the base Sorento LX trim model starting at $29,495 as a compact CUV going up against the likes of Toyota RAV4, Ford Escape and the Nissan Rogue. The mid-trim EX and top-trim SX models are seen as an intermediate CUV competing against Toyota Highlander, Ford Edge and Nissan Murano. The SX starting at $43,195 is the only version with seven seats. My fully loaded SX+ started at $46,695. Styling has changed only slightly from the previous model year. The 19-inch polished alloy wheels fit nicely with the overall design and add a nice finishing touch to the vehicle.

If you happen to be shopping for a CUV or SUV with a luxury bent, any one of the Kia Sorento models should be at the top of your list. As I’ve said before, most definitely if you want a seven seater in the $40,000 price range.