Across the ocean in 54 days

It wasn’t just because it was there. It was also because there are far greater challenges that so many others must face. Perhaps Laval St.
Aug 31, 2016 12:00 AM By: Scott Hayes 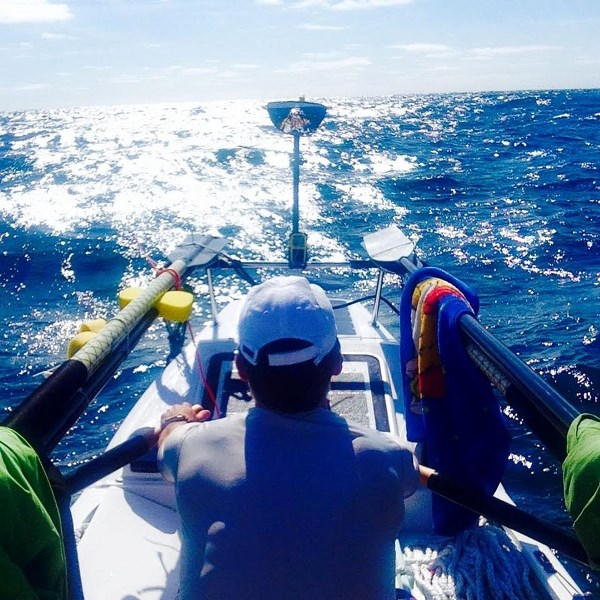 Not a bad view. Laval St. Germain rowed by himself in a specialized ocean rowing vessel to accomplish another item on his extensive bucket list and also to raise $200

It wasn’t just because it was there. It was also because there are far greater challenges that so many others must face.

Perhaps Laval St. Germain might paraphrase the famous quote from Everest-climbing George Mallory when talking about his own reasons for his recent 4,500-kilometre solo rowing adventure across the Atlantic Ocean.

Now living in Calgary, the 47-year-old Morinville-born man is an admitted adventure racer, mountain biker, road cyclist, ultra marathoner, mountaineer, skier and avid fitness lover. He has a bit of Mallory in him too. St. Germain was the first Canadian to summit Mount Everest without the aid of bottled oxygen.

During the day, he’s a pilot who flies Boeing 737s for a northern airline but during his free time, he sees physical and psychological challenges and sets out to overcome them all.

“I’ve climbed six of the highest points on the seven continents. I’ve got Antarctica left,” he noted. “I love the outdoors and I love adventure.”

That’s why he spent his summer embarking on an epic journey with a dual purpose: to cross it off of his bucket list but also and more importantly to raise donations to help people fighting cancer. He called it the Confront Cancer Ocean Row.

“It was a good trip … a good summer,” he sighed during a phone interview days after he returned home from France where he completed his 54-day trip from Halifax on Aug. 7. Emerging from his specialized Rannoch Adventure sea vessel, he said that his shoulders didn’t much mind the exertion but he was cramped from the quarters. Walking up stairs was an interesting challenge afterward.

“If you can imagine a space capsule back in the Apollo days. It has a hatch. It’s sort of like a life support system for the ocean. I owe that boat a lot!” he laughed. “Think if you spent two months sitting on a rowing machine at the gym … and then only being able to walk about a metre and a half from the seat. It’s really tough on the body. You become this ocean rowing animal.”

Speaking of ocean animals, he wasn’t entirely alone out there.

“I had so many encounters with dolphins and whales and then, of course, the passing ships, which is fantastic to talk to another human being out there. I saw incredible things. I saw things that I’ll never forget, things like the bioluminescence where the water seems like it’s on fire.”

He even had the incredible experience of a whale surfacing two metres away and looking at him with a “big grapefruit-sized eye” before it dove back down, hitting his boat with its tail on the way.

Maybe that helped him along or maybe he had some pretty smooth sailing. He arrived in Brest, France ahead of schedule. Mission accomplished.

Well, the easy part was accomplished anyway. His body is still adjusting to land life again but there’s also the matter of getting pledges.

“I’ve never done a fundraiser before. I decided to do that just because of the proximity of cancer to all of us.”

A good friend of his was diagnosed with lung cancer earlier this year. He’s 41 and has never smoked. He’s in the fight of his life, St. Germain said.

“I had always wanted to row across an ocean. I thought why don’t I just use the notoriety and the uniqueness of this expedition to try and raise some money for a good cause.”

Receiving donations for the Alberta Cancer Foundation and has amassed slightly more than $53,000 towards his goal of $200,000. People can offer their support by visiting albertacancer.ca/confrontcanceroceanrow.