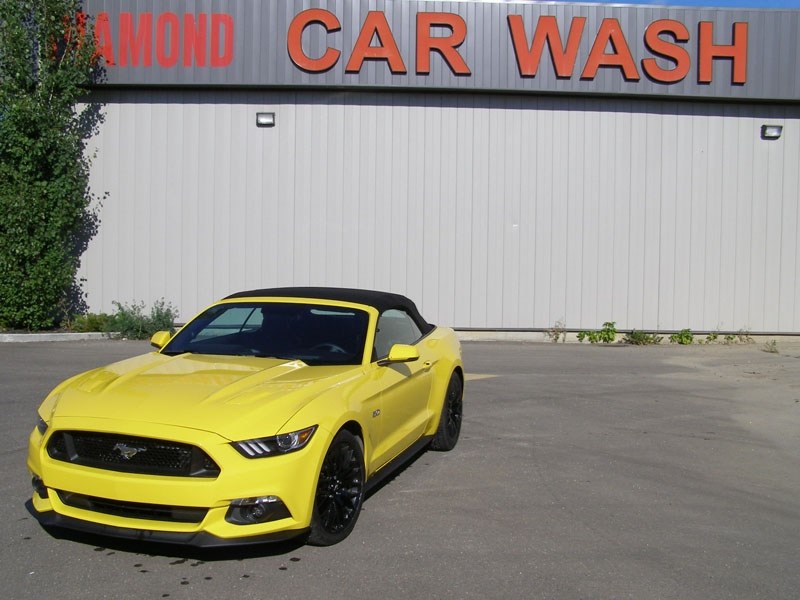 I’ve finally been able to get my hands on a Mustang convertible; a 2016 model GT loaded with options and powered by a 5.0 litre, 435 horsepower V8. Putting the power to the rear wheels is the standard six-speed manual transmission. The short throws from gear-to-gear are welcome as such a transmission in urban driving gets to be a chore on a long commute. The bonus is when you drop the top, you get the full throat sound of the V8.

Putting the top down isn’t complicated. It takes just three steps: pull down a handle in the middle of the front windshield frame, twist to unlock the fabric top, then push a button to send it down flat behind the rear seat. The two oldest grandkids had never experienced a convertible before. One got to enjoy wind in her face at 120 km/h for just a couple of minutes. The other sat upright in his booster seat in the back with a grand view of his surroundings at a slightly slower rate of speed.

Clearly, a Mustang whether coupe or convertible is a summer toy. The coupe is certainly the most sensible choice in our climate. I’ve owned six mostly Fox body Mustangs – one ’66 hardtop. A 2003 V6 coupe now sits collecting dust in the garage. For me, the current generation Mustang is a great car but too big for my tastes. Ford is now in the midst of designing a slightly smaller platform for the next generation ’Stang. The Chevrolet Camaro has already undergone a diet; Chrysler will be bringing out a smaller Challenger and a ’Cuda convertible.

My test convertible took me to Slave Lake for the day, where I actually held close to the speed limit and was able to achieve 9.3L/100km at 106 km/h. For those of you not so metric, think just under 30 miles per Imperial gallon. A dash to Calgary at 120 km/h returned 11.0 L/100km or about 24.1 mpg. Not that many buyers of a V8 Mustang are going to care about fuel consumption when gas continues to be a bargain, but I had to know.

All that highway driving proved the optional leather covered power lumbar seats were indeed comfortable for a long road trip. With the top up the increased wind and road noise gets a little tiresome after three hours but hey, that comes with the territory. The interior and instrumentation is well laid out and put together with everything giving a sense of quality finish. My only gripe is the design of the cruise control switch on the steering wheel. Let’s just say Ford has done this control switch better in the past.

Performance and handling can’t be criticized. My car had the GT Performance Package, a $3,700 option, which includes a set of stylish 19-inch black aluminum wheels wrapped in sticky summer rubber. Plus you get high-quality Brembo six-piston brake calipers and an upgraded set of rotors. And there’s more; the front springs, radiator, strut-tower brace, and rear-sway bar have all been beefed up and upgraded. A Torsen limited-slip differential with a 3.73 ratio final-drive puts down all that torque the V8 generates, especially when during hard cornering.

The handling of the convertible is very good, as you would expect since this model doesn’t weigh much more than the coupe.

Yes, there is body roll but unless you really push through a tight turn, you won’t feel the mass of the vehicle and experience the roll. Steering is communicative, although a little light and numb. You can select other steering modes, but they seem to feel the same. The long hood also makes seeing over it difficult, adding to the illusion that you’re in a big unwieldy vehicle – especially in a tight urban setting. This is why I feel the Mustang needs to come down a little in size. When the Mustang came out in the mid-sixties it was billed as a small sporty car for everyone. Unfortunately, it’s far from that now although a turbo four and a V6 are available. I think most young men and women of today are attracted to smaller and affordable cars or CUVs, if they do have any interest in owning a vehicle.

You can’t argue though, the Mustang and other current muscle cars are a vast improvement in many ways from yesteryear’s muscle cars including those of the last decade. The 2016 Mustang GT convertible is a Grand Touring car to be sure. Its enjoyment comes in relaxed driving in the countryside. The GT convertible starts at $49,900. Several options later including a high-end stereo, GT performance package, adaptive cruise control and reverse park assist, you’re up to $59,198. It’s a lot of dollars, but a bargain when you start comparing the Mustang with some of its competitors.