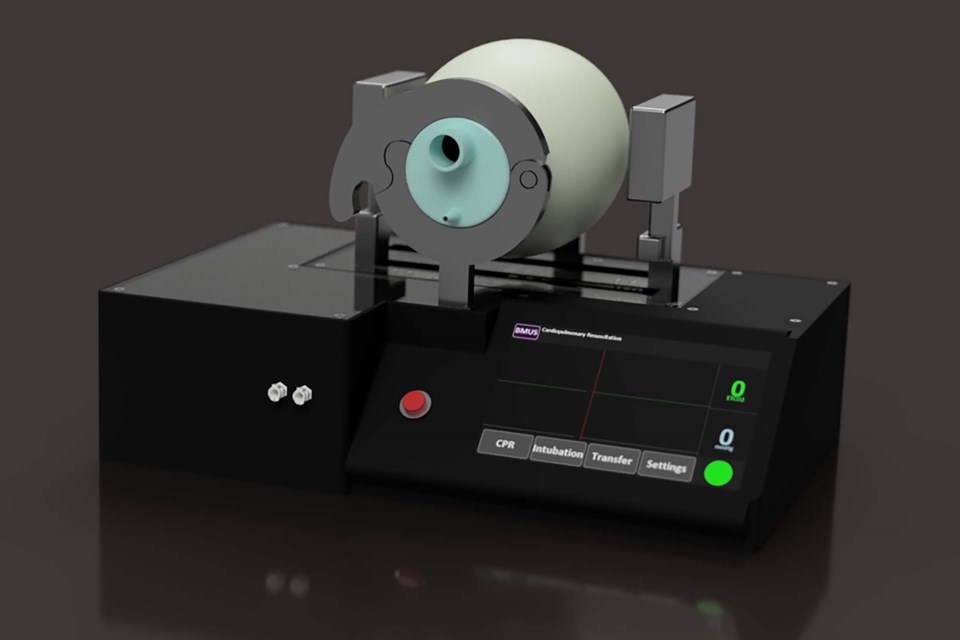 AUTO SQUEEZER — A digital mock-up of the Bag Me Up Scotty 5000 device designed by former St. Albert resident Daniel Tkaczyk and teammates Zyryl Mariano and Edgard Jose at NAIT. The device, meant to help paramedics keep patients breathing, has been nominated for an award from the Association of Science & Engineering Technology Professionals of Alberta. ASET/Photo

A Bellerose Composite alumnus has won provincial fame for his plans for a device that could help paramedics keep patients breathing.

The Northern Alberta Institute of Technology (NAIT) team of former St. Albert resident Daniel Tkaczyk, Zyryl Mariano, and Edgard Jose was announced March 29 as one of the seven finalists for the 2021 Association of Science & Engineering Technology Professionals of Alberta (ASET) Capstone Project of the Year Award.

Back in 2017, the association started the Capstone Project award to promote engineering technology and highlight the best capstone project to come out of NAIT, the Southern Alberta Institute of Technology, Red Deer College, and Lethbridge College in any given year.

“These projects and these young people represent the best and the brightest,” Cavanaugh said, and this award gives them some recognition.

Past winning projects included a Lidar-equipped cane for the blind and an experiment to see if bamboo could replace steel rebar in buildings.

A Bellerose grad and biomedical engineering technologist, Tkaczyk said he and his teammates got the idea for what they dubbed the Bag Me Up Scotty 5000 (a reference to Star Trek and popular infomercials) after they asked a paramedic friend for ideas. They decided to build a device to address the challenge of making the bag valve mask (that squeezy ball/air mask combination often seen in medical dramas) easier to use.

Paramedics often use a bag valve mask to keep oxygenated blood flowing to a patient’s brain and heart during an emergency, Tkaczyk said. This involves squeezing the bag repeatedly for long periods of time, which can tire the paramedic and result in not enough air getting to the patient.

Tkaczyk and his team designed a shoebox-sized device that would squeeze the bag for the paramedic, allowing them to focus on other parts of a patient’s care.

To use it, the paramedic would strap the mask to the patient, put the squeeze bag between the device’s paddles, set the ventilation rate on a touchscreen and push the start button. The device would then use a battery-powered motor to move the paddles and squeeze the bag, pushing air into the patient’s lungs. Pressure and CO2 sensors would monitor oxygen levels and airway clogs, while a web app would transmit a record of the patient’s respiratory session online. The paramedic could also push the red button on the device if they needed just one or two bag squeezes (such as during CPR).

Tkaczyk said the team had all the components of the device built and tested when the pandemic arrived in Alberta in March 2020 and closed all the schools. As such, they never got to build a physical prototype and had to settle for a digital mock-up.

Tkaczyk said he wasn’t sure if this device would ever get built or commercialized, but was grateful for the recognition the team had gained from this nomination. He has since graduated from NAIT and now worked to repair medical devices at a hospital in Regina.

Cavanaugh said the winner of the Capstone Project of the Year would receive a certificate and a trophy for their host college. This year’s winner will be announced in May.