A St. Albert inventor has come up with a solar-powered generator that she hopes will make the world a greener place. Connie Stacey, owner of Edmonton's Growing Greener Innovations and St.
Nov 18, 2016 11:00 PM By: Kevin Ma 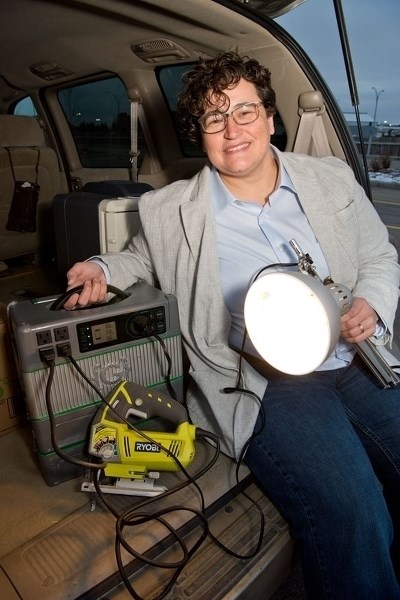 A St. Albert inventor has come up with a solar-powered generator that she hopes will make the world a greener place.

"People will usually make a green choice when it's an easy choice," she said, and this device was an easy-to-use alternative to noisy, polluting gasoline generators.

While it won't replace all generators, Stacey said this device should be of interest to campers and construction workers who need power in the field.

The roughly $2,000 device provides up to 1.2 kWh of electricity. Electrical engineer and renewable power advocate Gordon Howell, who is not affiliated with Stacey or her company, said this device would likely provide enough power for a picnic or a day of light power-tool use.

"It sounds like a good product for the objectives that it is wanting to meet," he said.

Stacey said she had always wanted to start her own business but didn't have an idea she was passionate about until she had twin boys three years ago.

"When they were just a couple of months old, I was walking with them in a stroller and we passed by some construction going on," she said.

On-site was a noisy gasoline generator, blasting CO2 and noise into the air and their faces.

"It was just so loud and noisy with this generator, I was like, 'Shut up, you're going to wake the kids!'" she recalled, laughing.

The experience got her thinking about the battery-operated backup systems she'd worked with in the IT industry for 20 years.

"I thought to myself, 'Why on earth don't we use a battery?'"

Stacey decided to start a company that would make products that would encourage people to go green.

"I look at my kids and I'd like to think we can do something about cleaning up the mess we made so there's something left for them."

Stacey assembled a prototype in her office using pre-existing technologies and hired industrial designer Brad Madu to create a sleek, marketable version. That meant investing about $750,000 of her and her family's money, which was no easy feat.

The finished device resembles a tackle-box with electrical sockets and an LCD display. Plug whatever you want into it – lamps, power saws, freezers – and it will power them in the field without noise or air pollution.

The device is similar to an uninterrupted power supply system and is classified as a solar generator, Stacey said. It uses 12-pound rechargeable bricks that contain the same lithium ion cells found in Tesla electric cars and an inverter to provide up to 1.2 kWh of power, which is enough to run a computer for 12 hours or a circular saw for two. You plug it into any outlet or solar panel to charge it.

The main advantage of gasoline generators is their ease of use, Stacey said; when they run out of juice, you just pour in more. While there are battery-powered generators on the market, they take forever to recharge and use 80-lb. lead acid batteries.

"The solution was to make the batteries interchangeable and stackable."

The device lets users stack bricks together like Lego and secure them with lunch-box clips. This patent-pending system lets people refuel the generator even quicker than a gasoline one and gives it a theoretically unlimited capacity – you just stack up more bricks. (It would probably get top-heavy after four, Stacey said.)

"And, of course, if you do charge it with a solar panel, which we hope people will choose to do, it's free (power)."

In addition to camping and construction, Stacey said this device had great potential for home backup power, as unlike gasoline or lead-acid systems, it produced no fumes in operation and could be used indoors.

Her company also hopes to release an adaptor next year that will make the bricks compatible with any lead-acid device. That includes Gators and forklifts, both of which could be easily refuelled by swapping in new bricks.

"The opportunities for greenhouse gas reductions is enormous," she added.

A typical gasoline-powered generator would produce about 2.4 tonnes of greenhouse gas emissions in a year, Stacey estimated. Provided it was charged with a solar panel, the Grengine would produce none.

Stacey said her company has previously sold a smaller version of this device, and hopes to get this one into stores such as Home Depot.

She hoped to raise $40,000 through her crowd-funding campaign to finalize development of the device and create sales.

Questions on the Grengine should go to [email protected]