Church powers up with sun

A local church has tapped the power of the sun to do the Lord's work by building the biggest solar array in the city. Workers installed the last of 22 photoelectric solar panels on a metal awning atop the St. Albert United Church Thursday afternoon.
Sep 10, 2011 12:00 AM By: Kevin Ma 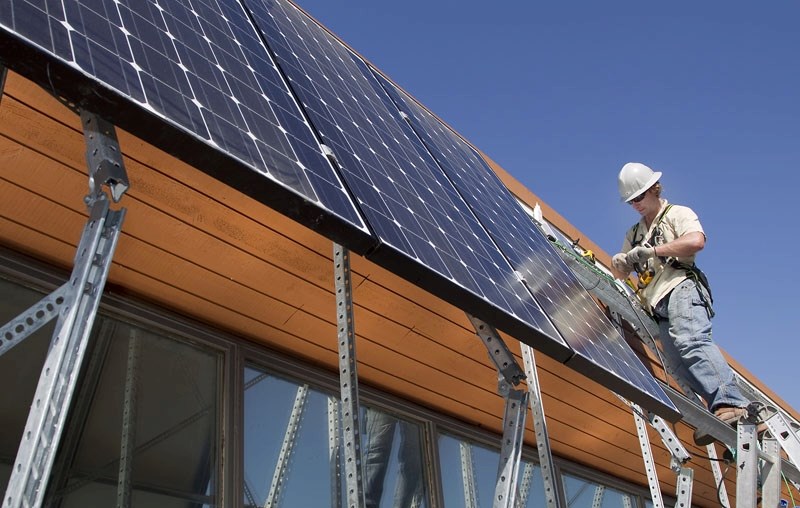 A local church has tapped the power of the sun to do the Lord's work by building the biggest solar array in the city.

Workers installed the last of 22 photoelectric solar panels on a metal awning atop the St. Albert United Church Thursday afternoon. The church is on Green Grove Drive next to St. Albert Trail.

The array should generate about $500 to $800 worth of electricity per year when operational later this month, says Dale Rokosh, church trustee and project manager — enough to meet 10 to 15 per cent of the church's electricity needs. It will also act as an awning for the church skylight, meaning the choir (which is often blinded by it) won't have to squint as much.

James Ravenscroft, the church's reverend, hoped the array would encourage other residents to invest in solar and tread more lightly on the Earth. "The Bible really teaches us that we are to be stewards and caretakers of the Earth rather than masters of it," he says. "We need to do whatever we can to lower our carbon footprint and be a witness to the community [to show] that we all can do it."

The roughly $50,000 project was funded in part by a $12,500 Environmental Initiatives Grant from the city. The rest of the money came from the Bocock family, who farm north of St. Albert.

Family member John Bocock says the family wanted to create a memorial to his sister-in-law, Phyllis, a trustee of the church who died last year. The Bococks had recently installed 24 solar panels on their property and were impressed with their performance, so they approached the church with a proposal to put panels on their roof.

"A tree is good," Bocock says, "but I think solar panels are better." (The tree next to the church's front door is coincidentally dedicated to his father, Geoff.)

The 4.73-kilowatt array should generate roughly 5,000 kilowatt-hours of electricity per year, according to Clifton Lofthaug, owner of Great Canadian Solar and installer of the panels. It's the biggest array he knew of in St. Albert — the next biggest is the 2.2-kilowatt array on the St. Albert Nordic Ski Club shed.

The array would pay for itself in about 30 to 40 years in terms of cost and in one to four years in terms of carbon footprint, Lofthaug says. "It definitely adds value to the building," he says, and the payoff will improve as electricity prices increase.

The panels should generate enough electricity to power a typical home for eight months a year, Lofthaug says. Any power not used by the church will flow into the power grid. Residents will be able to track the performance of each panel on the church's website later this month.

Bocock said solar power is one of the few technologies available that can replace oil and gas, both of which are running out. "We need to get serious about alternative energy, and solar is a good way to do it."

The church is also working on an energy audit to further trim its environmental footprint, Ravenscroft says. "If we believe as Christians that we are called to live gently on the Earth … then this is one small step towards doing that."