City Councillor Bob Russell is calling for the suspension of a Fish and Wildlife officer and an investigation after a moose was shot dead in the heart of St. Albert on Wednesday.
Apr 1, 2017 12:00 AM By: Jennifer Henderson, Local Journalism Initiative reporter 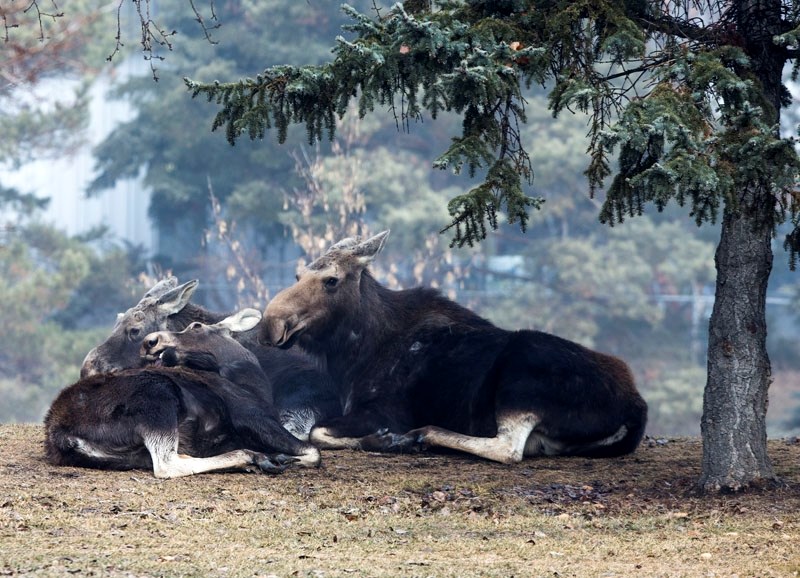 A female moose and two calves wandered into a park area along Red Willow Trail in the heart of St. Albert on Wednesday morning. Though efforts to frighten the animals into moving away from the area were made by Alberta Fish and Wildlife officers with the help of St. Albert RCMP

City Councillor Bob Russell is calling for the suspension of a Fish and Wildlife officer and an investigation after a moose was shot dead in the heart of St. Albert on Wednesday.

Some witnesses have questioned the need for the moose to be killed, and challenged the official report of events. They also wondered why the animal was not tranquilized instead of shot.

RCMP say they received multiple complaints that a cow moose and her two yearlings had wandered through Red Willow Park and situated themselves along the river near the intersection of St. Albert Trail and Sturgeon Road around 10 a.m. Alberta Fish and Wildlife were called to attend the moose along with members of the RCMP. More than two dozen spectators stopped to watch.

Fish and Wildlife officers tried to get the moose to move along. They later fired rubber bullets and beanbag guns at the moose, but were not able to get them to budge. Officials said the cow moose charged and an officer shot the moose at 11:50 a.m. The two yearlings were tranquilized and moved safely out of the area.

“Moose are very large and very powerful and they can cause serious injury to a person,” said Cox. “And with a sow moose that has two calves they can be quick to protect their young if any members of the public get too close.”

Fish and Wildlife attempted to herd the moose away from the high traffic area and down the river valley and eventually out of town by using rubber bullets and beanbag guns. The strategy is commonly used to move moose and show them that the area is not safe for them and encourage them to leave, Cox said.

Cox said that moose situations are usually “safely and successfully resolved using these kinds of tactics.”

After using this strategy, known as aversive conditioning, for around half an hour, Cox said that the mother moose became aggressive and charged the Fish and Wildlife officer.

“Unfortunately in this situation the cow moose charged one of the Fish and Wildlife officers and with the life and wellbeing of that officer in clear and present danger, the officers on scene had no option but to put that moose down mid charge,” Cox said.

Once the moose was shot, Cox said that the two yearling were tranquilized and eventually transported safely to the west of the city where they are doing fine.

But some bystanders are questioning if the moose actually charged the officer, while others are concerned she was goaded into charging the officer.

One witness, who wanted to remain anonymous, said that the officers were shooting the yearlings with a beanbag gun and it was just the mother’s instinct to protect her young and charge the officers.

Another bystander, Stuart Loomis, who was taking photos and videos of the incident, said that even after reviewing his footage, he is confident that the moose never charged the officer. Loomis, who has been a member of the Big Lake Environment Support Society for many years, believes the moose was running away from the officer when it was shot.

Loomis and many other bystanders are concerned with many aspects of the event. He is upset there was no attempt to tranquilize the moose before it was fatally shot.

Cox said tranquilizing animals does not always take effect immediately and it can take a prolonged amount of time to immobilize the animal. If the animal is under stressful conditions or in an unfamiliar situation, adrenalin can diminish the effect of the drug.

Another concern with tranquilizing animals is that the dart must hit the animal in a certain area of the body where there is good circulation, and that opportunity is not always presented.

Officers also had to consider the possibility of capture myopathy, which is a disease complex where the stress of being captured and restrained causes the animal’s muscles to stop functioning properly. There is no treatment for the disease and it can lead to an animal’s death.

Cox said that the officers had to tranquilize the two yearlings after the mother’s death because they would not have left their mother. Neither of the ungulates suffered from the disease.

Other spectators raised concerns that St. Albert Trail was not shut down to accommodate the safe passage of the moose, while some people are concerned with the firing of a shotgun in the heart of the city.

According to Cox, the officers used shotguns capable of firing both bean bags and slugs.

“A slug is something that is not going to travel as far as an other type of round might,” Cox said. “These were used as a last resort and ultimately officers will not discharge their firearms with live ammunition if there are other options available.”

Loomis said he is also upset that the area wasn’t sectioned off properly and that there were no attempts made to communicate with the public what was happening in the area. The incident took place next to the BLESS cabin (at the northeast corner of Sturgeon Road and St. Albert Trail) and many were concerned that there were young families in the area who witnessed the event.

There were also reports that the moose had possibly been in the city limits for several weeks and members of the public were left wondering why they were not removed before they got to St. Albert Trail.

Cox said that animals wander into city limits frequently and officers need to gauge each call for public safety.

“Often if moose are minding their own business in an acceptable location and there is not a risk to public safety they may choose to leave them alone,” Cox said.

Cox said that the outcome is not what anyone wanted and that it is a very difficult situation for everyone.

“It is something that unfortunately many officers have to cope with in this line of work. Ultimately their job is to put themselves between dangerous wildlife and the public to ensure that the public is kept safe. In this situation we are thankful that no one was hurt.”

Russell has heard from multiple concerned citizens about the incident and is calling for the officer to be suspended until an investigation is done into the incident. He said that it doesn’t seem like there was a clear plan for the situation and no formal protocol.

Russell plans to raise the issue at city council on Monday night.