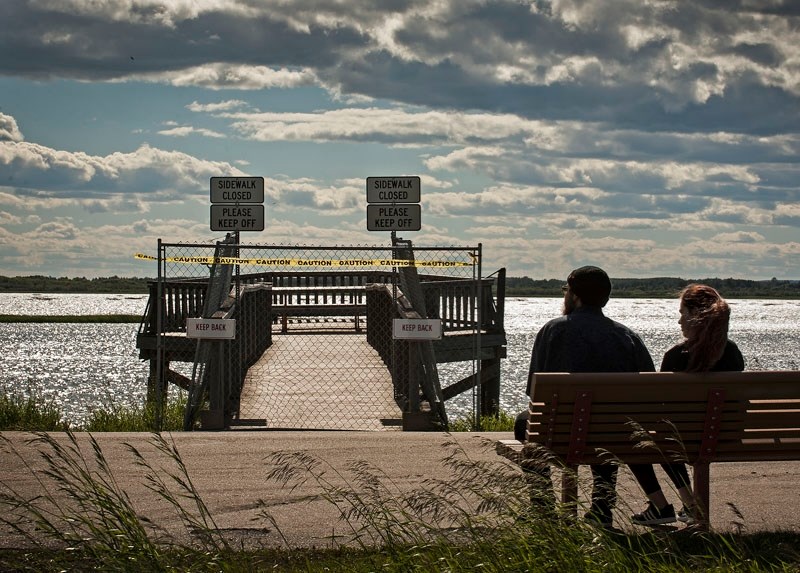 CLOSED — Signs and barriers have been erected at the BLESS platform on Big Lake as seen in St. Albert June 22

The city has closed the Big Lake bird platform because it's not safe to use, and there's no telling when – or if – it will reopen.

The closure follows a preliminary structural assessment of the platform done Wednesday.

Originally built by BLESS in 1995, the platform was later sold to the city for a dollar and is city property, said BLESS spokesperson Miles Constable.

The platform has had a noticeable warp to it in recent years, and was particularly slanted earlier this summer.

BLESS first noticed that the platform was leaning badly to the south about five years ago, making the front end resemble the prow of a ship, Constable said. When they flagged the issue to the city, crews found that the platform had popped off some of its supports and nailed it back on, which fixed the problem until recently.

"Over the last two years it appears to be shifting significantly," Constable said, with some of the railings starting to separate from each other. Crews nailed some boards over the worst spots earlier this year but ordered a more detailed structural assessment.

Some shifting is expected with a wooden structure built in a place like this, but the tilt got very bad very fast this year, said Dean Schick, acting director of engineering services with the City of St. Albert. A consultant examined the platform Wednesday and found that the pier caps had started to shift, and that gaps had started to appear in the structure itself.

While it wasn't at risk of imminent collapse, Schick said the city has closed the platform for safety reasons as of 11 a.m. Thursday in accordance with the consultant's report, which recommended it be closed pending a more detailed assessment.

"This is a very proactive precaution, but not one the city takes lightly."

Originally built with about $12,500 in provincial lottery funds, the platform is an extremely popular meeting spot, drawing hundreds of visitors on most weekends, Constable said. It's also the site of the annual Springing to Life bird count.

While the platform's closure won't affect BLESS directly, Constable said it could affect the many visitors to Lois Hole Centennial Provincial Park.

"It's one of the few areas where people can actually overlook the lake and park."

Tom Sutherland, area manager for Alberta Environment and Parks, said he was disappointed to hear of the platform's closure.

"It's a great asset. It's very popular with the public and we think it's important to have one."

Schick said it's unclear when the platform would reopen. If it's a matter of fixing a few boards, it could happen quickly, but if the assessment recommends a rebuild, they'd need environmental permits, possibly budgetary approval, and would have to work around migratory bird season. He hoped to have the detailed assessment done next month.

Schick said he was also in talks with BLESS to move the interpretive signs, table, and binoculars off the platform so people could keep using them.

Constable said he suspects any work to replace the platform would have to wait until the ground freezes. He asked the city to keep an open mind should it decide to build a replacement, and consider working with BLESS and Alberta Environment to make a bigger, better one.

Sutherland said the province would be happy to explore a replacement platform with the city.

Schick asked everyone to stay off the platform to ensure his or her safety.

Visit stalbert.ca/rec/parks/system/big-lake/ for updates on the platform.