A new pilot project will allow St. Albert residents the option to recycle some of their Styrofoam at the Mike Mitchell Recycling Depot starting as early as this spring.
Feb 28, 2019 10:05 AM By: Jeff Labine 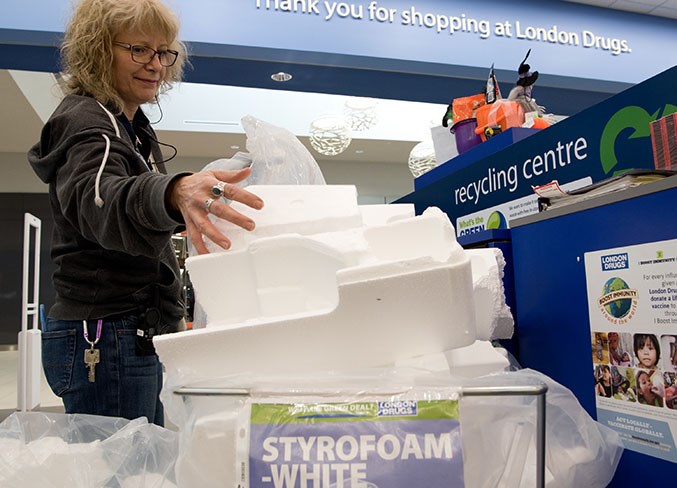 London Drugs is currently one of the few place in St. Albert to take Styrofoam for recycling. Here, store recycling guru Linda Helberg shows off some of the Styrofoam brought in.

A new pilot project will allow St. Albert residents the option to recycle some of their Styrofoam at the Mike Mitchell Recycling Depot starting as early as this spring.

The $12,000 project, which will last for one year, received unanimous support from city council during Monday’s meeting following a presentation by the city's acting director of utilities and environment Brian Brost. Styrofoam, which is a trademarked name, or expanded polystyrene (EPS), has never been a part of the city’s blue bag recycling program and has not been allowed at the recycling depot. However, the city learned there is a company that could process EPS at the recycling depot.

“Although we have not yet conducted a waste composition study within the city, we don’t know the precise amount of EPS in the city,” Brost said. “We’ve relied on predictive volumes that Strathcona County has received at their station. For us to process the similar volumes based on our population base, we’re estimating approximately $6,000 per year for recycling.”

If council decides to make the program permanent by the end of the year, then the cost would be covered through the department’s utilities operational budget.

Not all Styrofoam will be accepted at the recycling depot. For example, packing peanuts won’t be accepted, nor will Styrofoam from food containers. Brost said residents who want to recycle their EPS will have to ensure it is clean and dry. Once it is at the depot, city staff will inspect and then transport it into a large tote bag, which will then go into a container for processing at a later date.

Council is expected to get an update on the program within a six-month time frame. The program's success will be measured in a number of ways, including air quality monitoring of the processing system itself, the overall volume and the end product that’s produced.

Coun. Sheena Hughes calculated that the cost to taxpayers wouldn’t be much, estimating it to be around a few cents per month.

“Styrofoam is noncompressible and it can fill up those bins in a hurry,” she said. “Residents have issues of how are we going to handle all this extra garbage that comes from this. I know some people try to hide (Styrofoam) insides boxes and try to put it in their blue bag. That causes additional problems. This is a solution where we can actually address it.”

Coun. Natalie Joly agreed, calling it a great “Band-aid solution,” but warned she didn’t want to lose sight of the city’s efforts to put more responsibility on producers. At the start of the month, St. Albert joined other Alberta municipalities in researching ways to shift the costs of managing recyclable materials back to those who produce them.

Mayor Cathy Heron added the recent changes to recycling has forced the city to look outside of the box. Heron may have been referencing the recent news that Chinese companies are no longer accepting foreign recycling materials.

“This is a fantastic step forward for our municipality,” Heron said. “I know when I buy anything that does this kind of packaging, it completely fills up my brown bin. This was a solution that was required.”

The program is expected to roll out in the second quarter of 2019.