While you are driving through Campbell or Riel business parks you may notice two or three more portable signs popping up advertising businesses in the area. This is because the city of St. Albert has loosened some of it’s portable sign bylaws again.
Jun 15, 2018 12:10 AM By: Jennifer Henderson, Local Journalism Initiative reporter 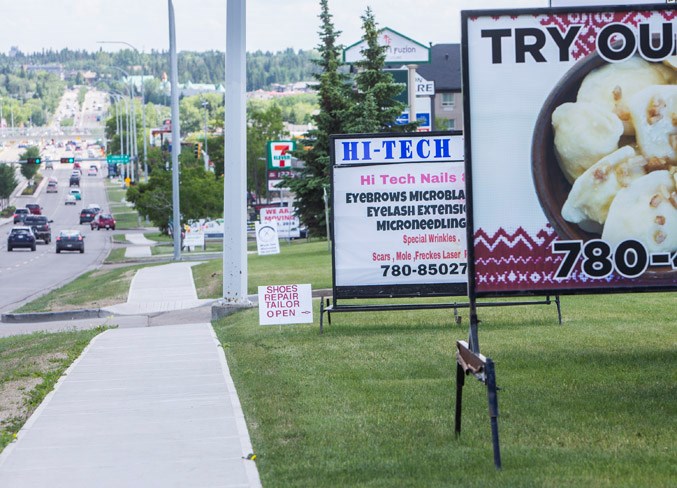 SIGNS- St. Albert has loosened it’s restrictions on some portable signs after a public hearing on Monday night. The move will only impact a handful of land parcels with only some businesses able to increase their visibility through temporary portable signs.

While you are driving through Campbell or Riel business parks you may notice two or three more portable signs popping up advertising businesses in the area.

This is because the city of St. Albert has loosened some of it’s portable sign bylaws again.

On Monday afternoon, city council voted to revert to the old sign bylaws regarding some portable signs that were changed less than a year ago after a public hearing on the issue. With two opposing votes coming from Mayor Cathy Heron and Councillor Wes Brodhead, the motion passed against administration’s recommendation.

Several councillors spoke in favour of the motion, noting the change was better for small businesses.

Brodhead phoned into the meeting and voted against the motion, but said that the business is still a friendly place to do businesses.

The changes reverted back to the previous bylaw, which allowed for unlimited portable signs in neighbourhood commercial areas, like the strip mall housing LB’s Pub and commercial and industrial services locations, like Campbell and Riel business parks. The locations will still need to follow other sign regulations that require a 30 metre spacing between each sign.

Coun. Sheena Hughes, who brought the motion forward in November, said that the change back to the old bylaw would only impact a few parcels of land but could allow for 12 businesses to utilize an additional three signs in the city over the course of a year.

“[It could allow] one more sign to occur when there is a really long building with multiple businesses in it that could benefit from it,” Hughes said.

The changes wouldn’t impact already heavily trafficked areas like St. Albert Trail, but would allow businesses in less busy areas of the city to utilize any advertising strategies they can, Hughes said.

The administration report warned that with the changes there is the possibility of a proliferation of signs in the rezoned areas, although Hughes pushed back, noting it was unlikely many new signs would pop-up in the city from these changes. Coun. Ken MacKay also chimed in and said he didn't believe there would be a proliferation of signs in the city.

The signs were once perceived as ugly which caused the original restrictions but Pawlechko said that they have become much more attractive, with most of them styled with digital print art.

The sign bylaw saw massive changes in September 2017 after the city spend two years looking into the new rules and regulations.