One of St. Albert’s most iconic buildings is once again fulfilling the pursuit for which it was originally built – scientific study.
Jan 29, 2013 11:00 PM By: St. Albert Today Staff 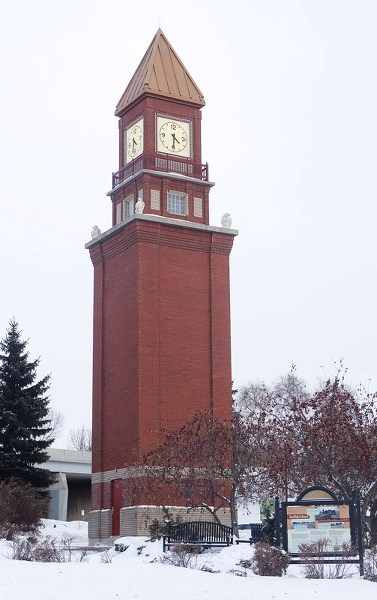 UNDER STUDY – A team from the U of A is taking measurements of the temperature and movement of bricks inside and outside the clock tower as part of a study on the aging of brick walls.

One of St. Albert’s most iconic buildings is once again fulfilling the pursuit for which it was originally built – scientific study.

A research team from the University of Alberta engineering department spent Tuesday afternoon outlining three months of research they have been conducting using the Perron Street Clock Tower.

The project involves measuring the temperature and movement of the tower’s interior cement bricks and exterior clay bricks over time. Adam Lohonyai, a PhD structural engineering student, said movement of brick walls or veneers over time can lead to failures in which the bricks simply fall off.

“We assume the brick just expanded too much and it just burst,” when failures happen, Lohonyai said. “That’s based on the assumption it expands the way we see in a laboratory setting but field conditions are different from lab conditions.”

Built in 1995, the Perron Street tower was originally proposed as a research tool to help measure similar variables in masonry. Measurements were taken for about a year after construction, and were done so manually, before the research stopped.

Now, using cellular modems and more sophisticated equipment, Lohonyai, led by Yasser Korany, an associate professor of structural engineering at the university, can take measurements on an hourly basis without ever visiting the clock tower. They can even upload new programs remotely.

“We need to be able to take measurements for a long period to see … what is the actual behaviour of these walls,” Lohonyai said.

To that end, the team with the Intelligent Remote Monitoring Project has installed several different sensors on all four walls of the tower. Different probes take the temperature of the walls in both the interior and exterior. Weighted wires balanced over sensors also measure changes in length of the interior and exterior wall, to see if the bricks inside or outside are expanding or contracting.

The advantage of the clock tower, said Korany, is that it was built with research in mind, so all four walls are different in their construction. For instance, all of the walls except the east wall have Styrofoam insulation.

“We needed a research structure and there it is,” said Korany.

The team has been collecting data remotely since October. While they cautioned it is still early, their preliminary observations show the south wall of the tower is gaining a significant amount of heat due to solar radiation, sometimes double what current standards dictate. The outside wall is also not contracting as much in the cold compared to the inside walls. To date, the wall has shrunk only one or two millimetres.

If the initial findings are later verified, they could have implications for the National Building Code and the provincial structural masonry code.

You can track the project online at www.perron-clocktower.rjc.ca