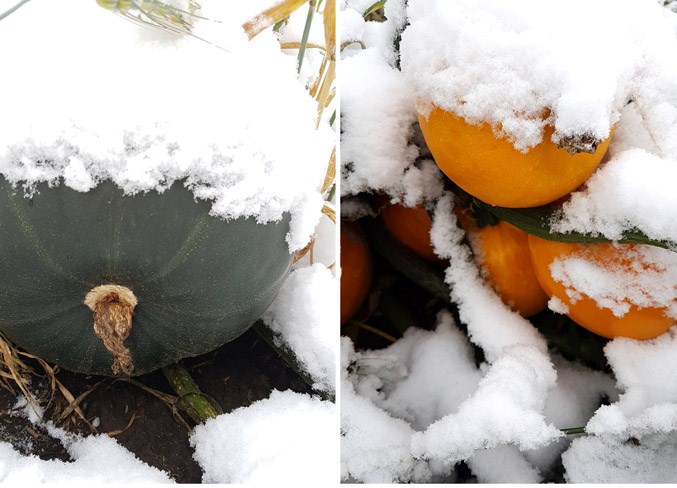 PUMPKINS ON ICE — Last week's snow put the chill on these pumpkins at Prairie Gardens near Bon Accord, said co-owner Tam Andersen. About a quarter of the farm's pumpkin crop was lost as a result, which could make for a pumpkin shortage this Halloween.

Snow and rain blanketed much of St. Albert and Sturgeon County last week, no doubt to the disappointment of many farmers who had previously been enjoying an early start to the 2018 harvest season.

Jeff Nonay said this was the third year in a row that he’d seen snow in September at Lakeside Dairy near Legal. This year’s snow was a bit earlier than last year’s, but not as cold.

“It definitely brought things to a standstill,” he said.

Down at Prairie Gardens and Adventure Farm near Bon Accord, Tam Andersen said that this was the first time in about 57 years that she’d seen snow on her farm on Sept. 12.

Nonay said most of the wheat and canola in his region was still out in the field when last week’s snow hit. Much of those crops had a slow start this year due to the late spring.

Snow doesn’t really damage grain crops, but can push them flat, which makes them more difficult to combine, adds debris to the hopper and lowers crop quality, Nonay said. Those crops will also be wet, which means more money spent on fuel for grain driers.

“It’s not good for the profitability side,” he said.

While they managed to get their wheat in before the snow arrived, Andersen said pretty much all of her market garden crops got dumped on by the snow. The dry July and smoky August meant that she still had about 10 acres of pumpkins in the fields waiting to mature last week, all of which have now stopped ripening due to the snow and cold. About a quarter of her pumpkins were a write-off as a result, which had her predicting a pumpkin shortage for the region.

“We’re definitely short,” she said, and many other growers in Alberta had also reported late harvests.

Dieter Kuhlmann of Kuhlmann’s Market Gardens, which sells at the St. Albert Farmers' Market, said many of his pumpkins also failed to mature, but noted that most Alberta stores get their pumpkins from farms further south.

“This is very serious,” he said. “There could likely be a shortage if other areas have the same kind of shortage we have.”

While he suspects his potatoes got through this month’s early frost unscathed, Nonay said he wouldn’t know for sure until he dug them up later this month.

Andersen said a touch of frost is actually good for some garden crops, as it pushes plants to produce more sugars to act as antifreeze for their leaves.

“The flavours go up and up and up if you get cold nights,” she said, which makes for super-sweet carrots and tastier brussels sprouts.

“The kale you dig out from underneath the snow is the best of all.”

About nine per cent of the Edmonton region’s wheat, barley, oats, canola and dry peas had been combined as of Sept. 11, Alberta Agriculture found during its most recent crop report – about seven per cent less than what’s usually collected by this time of year. Nonay said Sturgeon farmers would need about two weeks of decent weather at this point to get back on schedule.

Environment Canada predicted more snow, rain, clouds and cold for the rest of this week.