City Coun. Bob Russell has threatened to cut his support for library funds if the public sends him any more of “the same email” advocating for a new branch library.
Nov 13, 2015 11:00 PM By: St. Albert Gazette 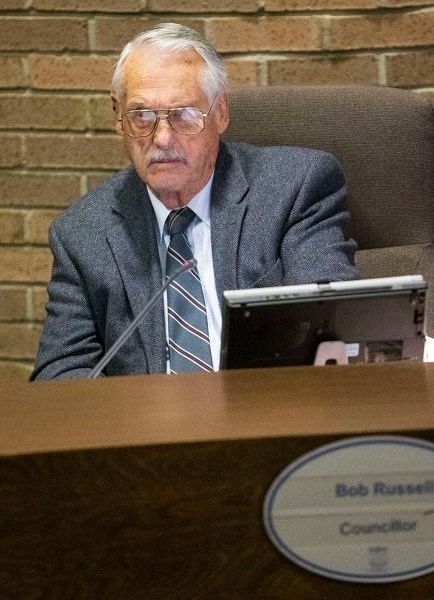 Coun. Bob Russell listens to budget proceedings on Thursday. He told library expansion supporters he would deduct $100 of his support per letter he receives lobbying for an expansion to the library.

City Coun. Bob Russell has threatened to cut his support for library funds if the public sends him any more of “the same email” advocating for a new branch library.

Russell told library board members at a council meeting Tuesday that he has been flooded with emails from residents asking councillors to support the branch proposal in their 2016 budget deliberations.

The emails are part of the library board’s Branch Out campaign to rally public support for the new branch’s business case. Residents have the option to sign a pre-written letter and send that to councillors either by regular or electronic mail.

Russell said he has already contacted the library about the flood of correspondence but it continues to ask the public to get in touch with city council.

“Time to bring it to an end,” he said. “We have other things to do. We are busy people.”

Russell reinforced his statements with a threat to library supporters. He said that for every email he receives as of Wednesday morning, “I will deduct the amount of money I would have voted for this provincial library by 100 bucks.”

The library board has long lobbied council for an expansion, saying the library was designed to serve a population of 50,000, a number that it surpassed in 1999.

A 2009 facility needs assessment study commissioned by the library indicated 85 per cent of residents who responded support a library expansion. With that information in hand, library officials hope to rally support for a new northern branch.

In response to Russell’s comments, library board chair Charmaine Brooks told council that she was pleased that residents are making their voices heard.

“As a chair, I’ve stood before you folks and been challenged to make sure that we show a critical mass of support,” she said.

“So I feel as though we’ve done our job and those emails are simply a result of St. Albertans being engaged and acting on their engagement.”

In a later interview, Brooks said the board was not intimidated by Russell’s comments. It is also a mystery to her how Russell would deduct the $100 for every email, she said.

But in her mind, listening to people is what councillors sign up for when taking the job, she said.

“I see that as a key part of their role,” she said. “It just seems quite odd that citizens would be effectively penalized for expressing their view to the people representing them.”

Library users were not impressed by Russell’s comments when asked about them on Thursday.

Mark Elun frequently rents books and movies from the library and uses its computers to look for jobs. He said it’s a “pretty busy” place every day and he supports the library’s plans to branch out.

As for the board’s campaign, he said councillors should listen to what people want because “it’s part of government.”

“That’s his job. He is a councillor, he is supposed to hear our opinion,” he said.

Claudine Wolfe said she often comes to the library with her daughter to take advantage of its youth programs. She also heard about the campaign but said she is comfortable with the library as it is.

“However, the comment I disagree with,” she said. “If people are voicing their concerns then it’s something to look into.”

Another library user who preferred to go only by her first name, Darlene, suggested the library could have perhaps found a different way to collect people’s opinions, like a petition. But she also did not think Russell’s response was right.

“I don’t think he can bully them into stopping,” she said.

Brooks meanwhile said the library board will continue to advocate for the new branch, and is also planning a T-shirt campaign.

The T-shirts will say “Branching Out. Let’s grow St. Albert Public Library” and are expected to go on sale at the library next week.

Brooks hopes that people will wear them and pack council chambers the next time council deliberates on the library budget.

She added that the city has “a beautiful website with the councillors’ contact information and phone numbers.”

“If people would rather phone Mr. Russell … I’ve heard that he prefers phone calls to emails,” she said.

Bob Russell has been involved in provincial and civic politics since the 1960s, and was elected to city council during this year’s byelection.