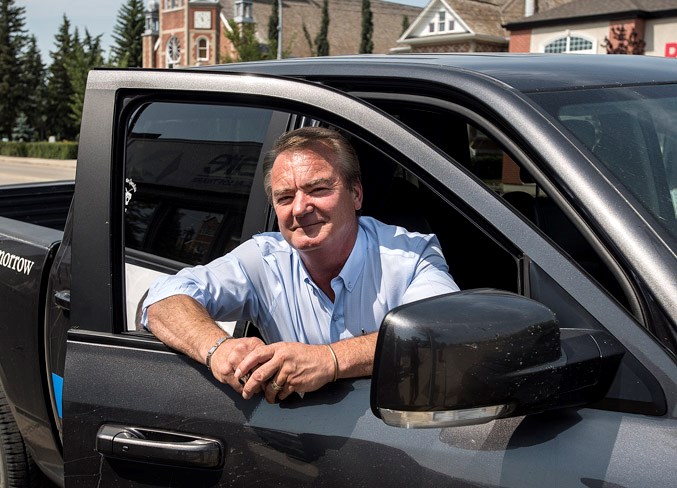 TEAM PLAYER – Dale Johnson, the disqualified United Conservative Party candidate for the riding of Lac Ste. Anne-Parkland, says he will support the new nominee as the party tries to defeat the NDP in the next provincial election.

The disqualified Conservative candidate for the Lac Ste. Anne-Parkland riding says he won't challenge the decision.

Dale Johnson, who was selected as the United Conservative Party nominee in August, was disqualified on Saturday after the party discovered he had paid $5,584.60 to an employee whom he had fired after a domestic dispute took place between the two.

Johnson said he is disappointed the party revoked his status as the UCP candidate.

“However, the UCP has the right to make that decision and I won’t be challenging it,” Johnson added.

“It is important now that we close ranks around whoever the new candidate will be and work together to defeat the NDP in this constituency ultimately and across the province … so therefore it makes perfect sense that the new candidate in the party will be able to count on me to do that.”

UCP executive director Janice Harrington confirmed Johnson was disqualified via email, and said he was previously made aware that his candidacy was under review pending an investigation.

According to court records, the incident took place on Nov. 12, 2012 when a fight broke out between Johnson and his partner, who was also his bookkeeper.

According to a January court ruling, Janice Janiten went to Johnson’s house because she believed he was being unfaithful to her after reading text messages she believed were proof of the affair. The court said she then threw his phone and likely hit him first, but the pair were injured in the scuffle.

The scrap continued, and Provincial Court Judge Karl Wilberg noted that Janiten suffered undisclosed injuries, which likely occurred when Johnson attempted to remove her from his house and defend himself. Johnson suffered a rotator cuff injury.

Johnson then removed Janiten from his property and drove her home, where Wilberg said he was quite possibly being kicked in the back during the drive because “she did not want to be in the vehicle.”

“Even though he was doing what seems like a decent thing in trying to take Ms. Janiten home, you cannot, without lawful authority, take people where they do not want to go,” the ruling read.

After the incident Janiten was fired from Johnson’s Country Automotive Specialties, Ltd. Company.

Wilberg said the situation caused Janiten to breach her duty to her employer but that existed partially because of the employer’s own doing.

The judge upheld the order that Johnson’s company was to pay the $5,594.60 to Janiten but said it was reasonable that the company could appeal the decision.

Harrington said a new nomination will be called and the details will be shared when possible.

The disqualification is the second in this UPC race in the riding. On Aug. 9, Jerry Molnar was disqualified from the race for controversial Facebook posts.

Examples of questionable social media behaviour by Molnar were included in an email, including him repeatedly calling former Ontario premier Kathleen Wynne a “tranny.”

Screenshots of Molnar’s posts were included in the email, and they show a Jan. 25 post in which he is joking about sexual harassment in the workplace and a Nov. 27, 2013 post in which he joked about sexual assault. Molnar also made distasteful comments about homeless people and shared posts from Breitbart News editor Milo Yiannopoulos that called illegal immigrants “lazy ass freeloaders.”

After Molnar’s disqualification Johnson beat out Everett Normandeau, Leah Wood and Barb Costache for the nomination.