The quaint black and white house at 9 Mission Ave. looks like the most peaceful place in the world. It sits in the shadows of an ancient elm tree at the foot of a historic hill. At the top end of the street, St. Albert Parish peers out over the city.
Aug 13, 2011 12:00 AM By: Scott Hayes 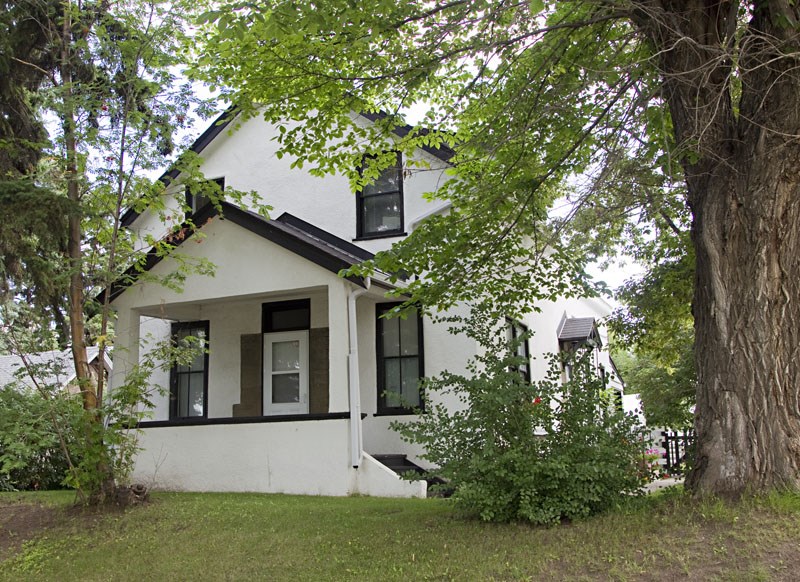 Historic Juneau House sits at the intersection of Madonna St. and Mission Ave. The house is said to be home to a ghost

The quaint black and white house at 9 Mission Ave. looks like the most peaceful place in the world. It sits in the shadows of an ancient elm tree at the foot of a historic hill. At the top end of the street, St. Albert Parish peers out over the city. There's a lot of history in this place. Set in the oldest residential district in St. Albert, the house shares a neighbourhood with tennis courts and the Little White Schoolhouse just across the tree-lined street. It's the oldest house in St. Albert, commonly known as Juneau House, a name attributed to it because of its original owners. "That's our baby," said retired senator, the Honourable Dr. Thelma Chalifoux, now the head of the Michif Cultural and Resource Institute, the steward of the property. The Michif Institute has occupied the building since 2003, five years after the city purchased it from the last residential owners, the Roberts family. Juneau House looks like it could last forever, but there are problems lurking beneath the surface.

The Roman Catholic Archdiocese first subdivided the site out of the former farmland of Riverlot 27 to help make way for formal town planning, progress and a burgeoning population. The soil was good and the scenery was beautiful so it didn't take long for people to claim their plots and start setting up their own households. Perpetua Juneau was the first owner. She was married to a popular fellow named Frank, a man with farming and mining interests. He constructed this two-storey wood frame residence sometime in the 1880s before it was reportedly moved to its current site around 1890. The house is no run-down shack, despite weathering more than a century's worth of prairie weather. It is immaculately kept up with freshly mowed grass, pristine sidewalks, a good roof and a paint job that still holds up — with only a few blemishes. The backyard could hold a substantial garden or play host to a beautiful game of croquet. The front porch hasn't had much use in recent years but it looks like an ideal place to share a cup of tea or chat with the neighbours. Inside, it's easy to imagine how cozy it must have been to live in the house. Space is tight except for the wide-open kitchen. Whoever dares to stand upright in any of the three bedrooms (up the long, straight flight of stairs) risks a bumped head on the sloped ceiling of the gabled roof. Juneau House is not just quaint — it's rare. The hand-hewn log floor joists, beams and columns are examples of early construction techniques and materials that were common in their time but uncommon now, according to an evaluation report completed by architect David Murray. His report further states that the Chevigny House is another excellent example of period log construction. Some of the original interior elements are also uncommon, like the three types of wood paneling on the stair handrail and the second floor window and door casings, Murray wrote. The house was designated as a municipal historic resource in 2009.

The present with ties to the past

Juneau House has a strong association with Dr. Arthur Giroux, St. Albert's first medical officer and mayor from 1913 to 1918. He and his family lived in the house from 1908 to 1943 and he operated his medical practice there for at least three decades. Dr. Giroux and his wife, Alice Morin, were active in the early cultural life of the town, even arranging for a small orchestra to play at local functions and theatrical events. Morin taught children from the nearby residential school how to play instruments. They in turn performed during dances or other functions at the Giroux household, "which I think is really cool. Here you are way out in western Canada with nothing around here and these people are bringing high society to the west," Chalifoux said. The story has a sad ending as the doctor died suddenly in the house in 1938. While accounts of his death vary from person to person, sometime afterward Juneau House occupants started noticing strange sounds and sensations. "Dr. Giroux is still there. He's our favourite ghost," Chalifoux said, although the identity or origin of the supernatural events is unclear. "He's never said, 'Hey. I'm here. It's Dr. Giroux.'" said Sharon Morin, volunteer at the institute and aboriginal programmer with the Musée Héritage Museum. "We smudge the house on a pretty regular basis. We do feel a presence at times but he's calmed down quite a bit. They did want to bring ghostbusters in here at one time but I really frown on that. I don't like to disrespect anybody, dead or alive. I just said no to that," she said. Ghosts or not, there are more substantial problems in the house that need attention, and soon.

Any 120-year-old house is bound to have problems. For Juneau House, it's about the wood – "old, old wood," as Morin puts it. According to the city's website, a capital project is in the works to perform critical repairs, fix code issues and conduct required maintenance to the structure starting next year. It's going to be a big job, as the house has to be raised so the faltering concrete foundation can be repaired. The original main floor log construction must be protected in the process, Murray wrote, but the original perimeter logs on top of the foundation wall will probably be damaged and rendered unsalvageable. "It's a historical house … it has to be repaired," Chalifoux said. The institute will have to vacate the premises for a period of likely six months so the work can be done but a start date and a budget haven't been finalized. "I'm hoping that the repairs will be quick," said Morin. It's currently in the city's 10-year capital plan to restore the house and to make the basement structurally sound, said Ann Ramsden, the director of heritage at the Musée Héritage Museum. The museum previously oversaw the care and condition of the house when the Arts and Heritage Foundation was its steward. It still acts as consultant for matters such as these, considering the home's historical value. Until that rehabilitation begins, the old wood of the elm in front of 9 Mission acts as a visual reminder of the old wood hidden beneath the black and white house. Juneau House is still sitting in the shade and needing some attention.