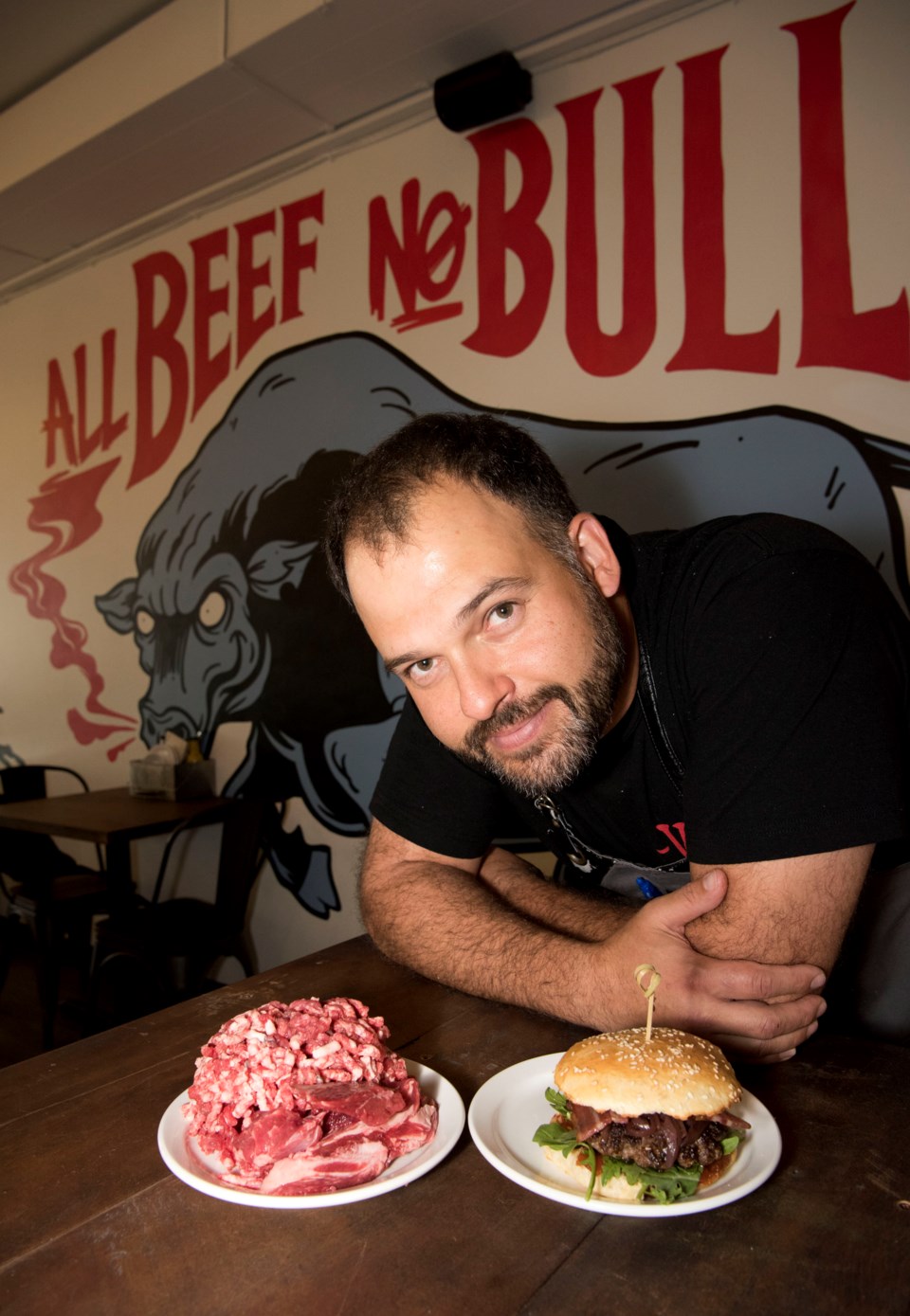 WHOLE COW BEEF – Restaurant owner Paul Shufelt shows how he takes beef raised at Sturgeon County's Lakeside Dairy and turns it into burgers at his new business, Woodshed Burgers. The restaurant has paired with Lakeside Dairy to use all parts of a cow.

A Sturgeon County dairy has teamed up with an Edmonton chef to bring whole local cows to your table.

Edmonton’s Woodshed Burgers officially opened for business last July 2. The restaurant uses beef raised at Sturgeon County’s Lakeside Dairy and is part of an unusual partnership that seeks to use all parts of the cow, not just the choice cuts.

Woodshed Burger owner Paul Shufelt said his new venture, which is closely tied to his other Edmonton restaurant, Workshop Eatery, has gotten off to a fantastic start.

“I think we had 1,100 people come through in about six days last week.”

Shufelt said all the beef used at his restaurants comes from Jeff Nonay’s Lakeside Dairy. Customers at Woodshed know they’re eating Nonay Beef, and can even order a burger named after Smurf, the calf Nonay’s daughter lost to a fire two years ago.

Nonay said he sells about 120 cows a year direct to local buyers like D’Arcy’s Meat Market, RGE RD Restaurant, and Shufelt. Doing so lets him connect with customers so they can appreciate the work that goes into his cows and the complexities of beef.

“There's a lot more to this animal than just steak.”

Shufelt said he and Nonay met about four years ago on a radio show on the farm-to-fork movement.

“He was the farmer, I was the chef, but ironically at that time we didn’t know each other at all,” he said.

“A couple of weeks later (Nonay) comes back into my restaurant trying to sell me some cheese.”

The two became friends, and Shufelt started using meat from Nonay’s farm at his restaurant. The two wanted to make use of the whole cow, but Shufelt didn’t have the freezer space for all that meat. Last September, Shufelt got the idea to set up a burger joint to use meat he couldn’t serve at his restaurant.

Shufelt said he buys about three cows a month from Nonay – that’s about 2,700 pounds of beef and bone – and splits them between his two restaurants. About 40 per cent (the steak-like cuts, brisket, and offal) goes to the eatery, and the rest (about 350 pounds of random bits) gets ground up for the burger joint. The fat gets used as cooking oil, and the bones go into the stock pot for gravy.

While most Alberta beef comes from Angus cows (simply because they produce more meat per cow), Nonay and Shufelt says the Holsteins used for dairy make for great eating.

“It’s incredibly well marbled, with great flavour,” Shufelt said, and even the usually tougher cuts are enjoyable to eat.

Nonay explained that dairies often have more cows and bulls than they need to maintain their milk herds, as a cow needs to give birth each year to make milk but also lives for many years. Dairies sell the "extra" animals as beef.

“There’s something to be said about pulling something from the ground and having it in your kitchen a few hours later,” he said, instead of using week-old stuff imported from California.

Most restaurants don’t want to buy whole cows because it takes a lot of work to cut and use all the meat, Shufelt said. Still, he encouraged other owners to try it, as it costs less, makes for a better quality product, and supports local farmers.

Woodshed Burgers is open seven days a week and is on 124 Street north of 107 Ave. in Edmonton. See thewoodshedyeg.com for details.