Electric plane to fly at Villeneuve 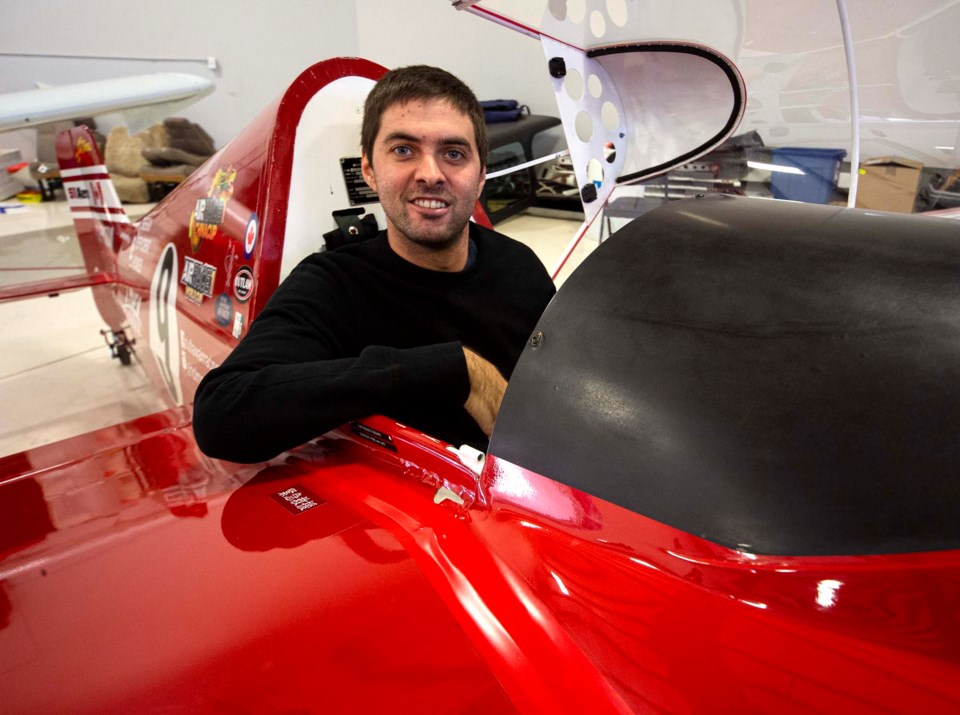 Edmonton's Scott Holmes of Outlaw Air Racing, along with a team of about 20 engineers in Silicon Valley, is attempting to convert his 1993 Cassutt race plane to an electric engine to take part in the 2020 Air Race E, which is billed as the world's first all-electric air race. CHRIS COLBOURNE/St. Albert Gazette

Air Race E is billed as the world’s first all-electric airplane race series, and will see eight planes zip around a 1.5-km-wide oval circuit some 10 metres above the ground while travelling at around 400 km/h.

Edmonton pilot and mechanical engineer Scott Holmes of Outlaw Air Racing is an air racer based at Villeneuve Airport. He has competed three times in the annual Reno Air Races in Reno, Nevada, and in races in China and Thailand.

Last year, Holmes said he invited some friends from California who worked in the electric vehicle industry to the Reno race. While they were there, air race organizer Jeff Zaltman announced he was organizing the all-electric Air Race E series.

Holmes said he’d been planning to replace his current 1993 red-and-white Cassutt race plane with a faster model, so he suggested to his friends that they put an electric motor in the Cassutt and enter this new race. They’ve been working on the conversion ever since.

Electric motors have drawn a lot of attention in aviation in recent years due to their potential to reduce greenhouse gas emissions from flights, which are considerable; the global aviation industry would have been the world’s sixth-biggest source of CO2 from energy use in 2015 if it had been a country, the International Council on Clean Transportation reports.

Commercial electric planes are exceedingly rare, with only a handful on the market or under development, Holmes said. As for electric race planes, there’s currently just one: the E-Racer Model built by Air Race E participant Team Condor unveiled at the Dubai Airshow earlier this month.

Electric planes are uncharted airspace, but that’s what excites Holmes and his team.

“We’re doing it to adventure, to do something new, to try something no one else has tried before and learn from it,” he said.

Holmes said he and his 20-odd teammates have a working motor built and are now doing safety checks before fitting it into the Cassutt for flight tests.

“The big advantage of electric power is you can make a very high horsepower output with a very small motor,” he said, which means more speed.

The Cassutt gets about 110 horsepower and 200 m.p.h. with its regular engine, and should fly faster with the 200 h.p. the electric motor can produce, Holmes said. The electric motor should also be more reliable, as it has just one moving part, and a lot quieter.

The plane itself should handle the same as it did before, as they’re not changing the airframe. Holmes said that familiarity should come in handy if he needs to make an emergency landing during testing.

Holme said electric flight is challenging, as unlike cars there’s a practical limit on the amount of battery weight your plane can carry. His team believes the Cassutt will fly at full power for about five minutes, which should be enough for the typical eight-lap, eight-minute air race if they throttle back a bit.

Holmes said he’s not sure when his plane will be ready to fly, or if his team’s roughly $100,000 budget will pay off. The team also doesn’t know when or where they’ll be racing, as the organizers haven’t released those details yet.

Air racing is all about building the fastest plane, and electric motors open up a whole new range of possibilities, Holmes said.

“The ability to adventure and experiment is back, just like way back in the 1930s and the golden age of aviation,” he said.

Holmes said his team plans to come out of this race with a fast plane, a whole lot of fun, and, of course, a first-place finish.