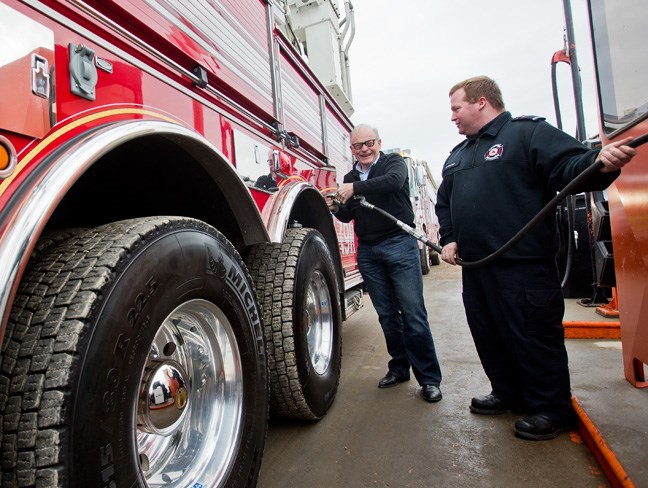 Ian MacGregor, the chairman for North West Refining, gets a little help from Morinville fire fighter Lt. Bret Wilson during a photo op at the Morinville UFA Petroleum Agency on Tuesday morning. Dignitaries were on hand to help celebrate the first diesel production from Canada’s first refinery in decades and to recognize community partners who support and benefit from the project.

Sturgeon County diesel is headed to a gas station near you now that the first new refinery built in Canada in decades is up and running. About 35 dignitaries gathered at the UFA Petroleum station in Morinville Tuesday to celebrate the start of diesel production at the Sturgeon Refinery. (The refinery supplies some of the station’s diesel.) North West Refining president Ian MacGregor was all smiles as he signed a commemorative yellow oil barrel and pumped diesel into a Morinville Fire Department truck for the crowd. “It’s a happy day for me. I kind of know what (William) Van Horne felt like on the railway there, pounding the last spike,” he said, referring to one of the officials present at the completion of the Canadian Pacific Railway. (While Van Horne was at the last spike ceremony, historians say railway financier Donald Smith was the one who actually hammered in the last spike.) The roughly $8.5 billion Sturgeon Refinery has been in the works since 2008. MacGregor said some 3,500 people are now on site finishing the plant’s last two units, which will allow them to process bitumen into synthetic crude next year. The plant can already process synthetic crude into diesel, and made its first diesel on Nov. 22, MacGregor said – he’s got a sample bottle from that initial run on his desk. The plant is now churning out about 15,000 barrels of diesel a day and distributing it throughout the region. This is Sturgeon County’s first diesel refinery and the first new refinery built in Canada since 1984, said former county mayor Don Rigney, who was in office when this refinery started construction. “It’s really all about the jobs, the pensions, the benefits, so the community people can stay here instead of following pipelines down to the U.S.” This refinery has been a massive contributor to the job market and has done much to raise the county’s international profile, said county Mayor Alanna Hnatiw. It would also contribute some $15 million in taxes to next year’s budget, which would help build roads and financial reserves. Athabasca-Sturgeon-Redwater MLA Colin Piquette said this project kept some 7,000 people employed during tough economic times, and would benefit Albertans despite low oil prices due to the price difference between bitumen and diesel. “This project is really representing what Albertans want to see for their natural resources,” he said. “I think this is going to be a real benefit for Albertans going forward.”

MacGregor said he hoped to have the plant fully operational next summer, at which point it would be able to turn 80,000 barrels of crude into 81,000 barrels of diesel a day. He brushed off questions about the project’s economics and cost overruns, noting that the Chunnel in Europe also went over budget. “No one remembers that now. They only remember that there are a hundred trains a day going through the thing, and the amount of commercial activity that creates. That’s what I believe we’ve created here today – an engine of the economy for the future.” MacGregor said the workforce at the refinery would drop by about 500 a month as construction wraps up before stabilizing at a permanent 400 jobs. Construction of the plant’s carbon-capture and sequestration system would start next summer. MacGregor said he was now working on the next two phases of the refinery, and hoped that another half dozen refineries would get built in Alberta afterwards. “Doing more of this in Alberta is really important to improving the way of life we’ve had here,” he said, saying that Alberta could make high value products that it could afford to get to market while also controlling its carbon footprint. “I think we can refine things in Alberta and make money doing it.” Piquette said the province was waiting for the refinery to reach full production before making any decisions on its next two phases.