“Good things come in small packages” the old saying goes. Not so sure that applies to Ford’s new EcoSport subcompact CUV. Built in India, this model has been selling in Asia for a few years.
0
Nov 13, 2018 3:35 PM By: Garry Melnyk 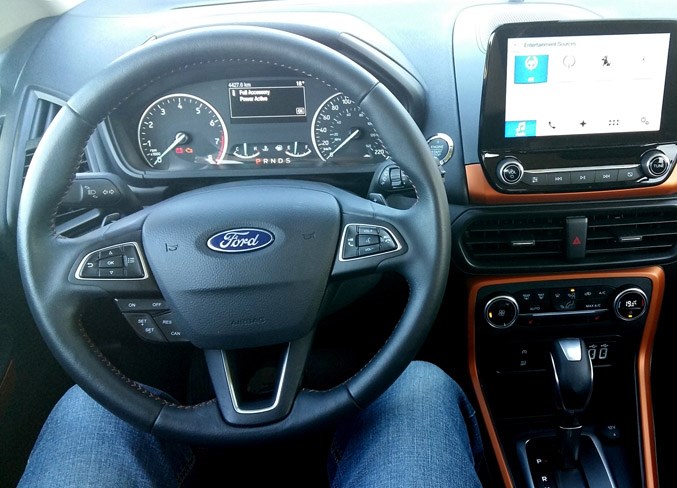 The interior of the EcoSport SES is less than grand. The space is dominated by cheap-looking plastic, but the instrument panel is built around the convenience of the driver.

“Good things come in small packages” the old saying goes. Not so sure that applies to Ford’s new  EcoSport subcompact CUV. Built in India, this model has been selling in Asia for a few years. With all the good vehicles Ford makes right now I was expecting the EcoSport to be better. However, it has some redeeming features. For starters I like its overall appearance, in lightning blue with 16-inch silver-painted aluminum wheels.

First the good, it’s great on gas. But even with a 2.0-litre, 4 cylinder engine there’s little left to give at 120 kilometres per hour on the QE II. If my little EcoSport SES was a cartoon character, it would be sweating profusely with its tongue hanging out trying to keep up with traffic. Even revving at 2,500 rpm plus, the little CUV achieved between 7.0 and 8 L/100km. The EcoSport comes standard with Auto Stop-Start technology to help you save fuel while driving around town. Don’t even consider the 1.0-litre three-cylinder engine unless you’re going to be doing the bulk of your driving in an urban area. Ford says the EcoSport can tow up to 2,000 pounds. OK, but that’s an added strain neither engine will enjoy in this little squirt.

The 6-speed SelectShift automatic gives you the gears in a smooth manner but upshifts a little too much.  I’d rather manually shift making better use of higher engine rpms to zip around. The SES model I had came with intelligent all-wheel-drive, which is just the ticket for winter. It does add weight along with a sunroof and roof rails you can’t delete from the higher-end option package.

Only one interior colour is offered — black. The seats in the SES are leather trimmed with copper striping that is also used to accent the centre console and instrument panel. The SES model starts at just over $29,000. At that price it’s a shame there is only one interior trim choice for the top tier model.  The overall feel of the interior is also less than premium, with much of the plastic material looking cheap and some of the squeaks I heard were plastic on plastic. At least the instrument panel is well done with everything close at hand for the driver.

Compared to some of its rivals, the EcoSport has the most front-seat space and tall guys like me shouldn’t feel cramped. The back seat has limited headroom and legroom. It’s a place for small kids, although a little snug if parents have to use a large car seat.  The front seats are good for long highway trips.

There is plenty of technology with the EcoSport offering three levels of infotainment, with top two versions supporting the user-friendly Sync 3 system and a touchscreen packed with features such as Apple CarPlay and Android Auto. Base models have a basic display without smartphone integration.

The EcoSport is fun to drive at times, particularly at slower speeds. I found the steering to be vague and the ride somewhat noisy, which takes away from the experience. Undercoating the underbody might help to mitigate some, perhaps most, of the road noise. The ride quality aided by a softly sprung suspension effectively isolated impacts, and it was also well-tuned to prevent bounce on bumpy road surfaces.

As small as the EcoSport is, it will pack a lot of cargo in the back for two people, with access through a side-hinged cargo door.  Of course, the rear seatback folds down, increasing cargo capacity. I’d recommend the optional spare-tire carrier on the cargo door. It’s more practical than the tire-inflator kit.

There are four distinct models: S, SE, Titanium and top-of-the line SES. Base price is $22,099 for the S model.  The SES I drove started at $29,399. There were no additional options, but tax and shipping took the final price to just over $31,000. If you really want a subcompact CUV the EcoSport is OK, but do your math to get the best price. You can get one nicely equipped for less.