Four St. Albert women will be recognized next month for their efforts to promote global citizenship.
Jan 24, 2017 11:00 PM By: Kevin Ma 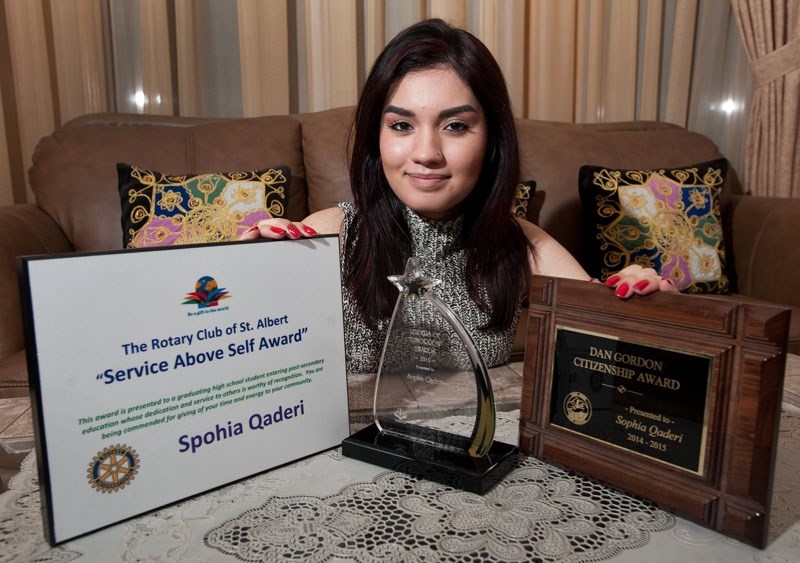 COMMUNITY ACTIVIST – Sophia Qaderi with a few of her many awards and recognitions at her home in St. Albert. The decorated community volunteer was picked for the Top 30 Under 30 for her work with Strong Girls Strong World Edmonton.

Four St. Albert women will be recognized next month for their efforts to promote global citizenship.

The Alberta Council for Global Cooperation announced earlier this month that it had picked Ranya El-Sharkawi, Katie Fitzgerald, Hilary Mercier and Sophia Qaderi of St. Albert to appear in its 2017 Top 30 Under 30 magazine.

The council is a coalition of about 60 Alberta organizations that promote global citizenship, said spokesperson Leah Ettarh. The magazine highlights 30 Albertans under the age of 30 who show exceptional commitment to sustainable international co-operation and community development, and is produced as part of International Development Week in February.

"It's really an opportunity for us as a community of international development practitioners to celebrate the youth and the work they are doing," Ettarh said.

The four from St. Albert have a lot in common. Two are members of MacEwan University's ambassador program, and two attend the University of Alberta. Two have roots in war-torn nations, three have worked with the disadvantaged in India, and all four have logged countless volunteer hours.

Bellerose graduate El-Sharkawi, 20, is taking political science at the U of A. She said she started volunteering in Grade 2 by taking out the recycling at recess.

"It may have been prompted by the cold weather and not wanting to go outside," she joked, but it instilled in her a sense of pride in taking care of her community.

As a first-generation Palestinian Canadian, El-Sharkawi said she was keenly aware of the reality of armed conflict from a young age. She gained an early interest in international human rights and turned to volunteerism to act on it.

Paul Kane graduate Qaderi, 19, is taking biology at MacEwan. Growing up watching the news and hearing about her parents' struggles in Afghanistan, she said she was inspired to start volunteering at 11 by collecting and sewing clothes for charity.

"A community is a team, and we have to help each other out as much as possible."

Fitzgerald, 19, is another PK grad and is taking commerce at MacEwan University. She said volunteerism was something instilled in her from a young age by her family, and that one of her first volunteer efforts was with the International Children's Festival when she was 12.

Mercier, a 22-year-old école Secondaire Sainte Marguerite d'Youville grad and U of A nursing student, got her start volunteering in 2015 through One! International Poverty Relief.

"I had taken a year off of school and felt like I needed to do something to make it worthwhile," Mercier said in an email.

Mercier learned of One!, which runs two schools for underprivileged kids in Mumbai, India, and spent two months with the organization there teaching English.

"The classroom atmosphere in the One! International schools is completely different than it is in Canada," she said. The students sat on the floor and used boxes as desks. There were people filtering through the room to other classes constantly interrupting lessons.

Mercier said she had to adapt her lessons to fit the culture, language and resources of the region. She later returned to Canada to create a health curriculum for the students and went back in May 2016 to put it into action.

Many of Fitzgerald's volunteer efforts were related to the Duke of Edinburgh's Award program, which encourages young people to become better citizens through community engagement.

In addition to promoting said program to local schools as an ambassador, Fitzgerald has also volunteered with St. Albert's BAM for Youth, St. Albert CIVC's Soaring Program and the Amplify Festival.

She also spent three weeks in Udaipur, India, building latrines for a school through Free the Children in around 2013. She said many farmers in that region did not have more than a Grade 8 education, and many students did not have shoes or clean drinking water.

"The coolest similarity was that they still had recess," she said, and that it was the students' favourite part of the day.

"Kids just want to play and have fun."

Free the Children's research suggested that girls were more likely to stay in school if they had clean washrooms. The new latrines should help residents get better jobs and education.

"It felt great. I knew we were there improving conditions for those kids," Fitzgerald said.

Qaderi said she went to India several years ago with her dad to give away her savings from her summer job to those living on the streets.

"There were kids and people of all ages on the street," she said of the eye-opening experience.

Locally, Qaderi volunteers through the SOARing program, promotes gender equality through Strong Girls Strong World in Edmonton and serves on the board of directors for the Optimist Club of St. Albert. She and Fitzgerald also volunteer at various MacEwan events as part of the university's ambassador program.

El-Sharkawi hasn't volunteered in India, but did contribute to research on missing kids in North America as a legal intern with the Koons Family Institute on International Law & Policy near Washington, D.C., last year. She's running a cross-Canada youth forum on reconciliation this winter as a board member with the John Humphrey Centre for Peace and Human Rights, co-chairs the U of A's Red Cross Club, and will represent St. Albert in March at the Daughters of the Vote conference in Ottawa.

That conference is part of the 100th anniversary of women getting the right to vote in Canada, and will see one woman from each federal riding literally take a seat in Parliament.

El-Sharkawi, Qaderi, Fitzgerald and Mercier encouraged youths to get involved and make a difference in their communities today.

The world's problems may seem far away, but human rights affect everyone, El-Sharkawi said.

You don't need thousands of dollars to make a difference either, Fitzgerald said. You can start a penny drive to build a school, for example, or raise money to buy a family a goat. Even simply raising awareness about global issues can have a ripple effect in your community.

"We can make a difference globally."

Communities are what make people successful, and they're team efforts, Qaderi said – without our support, they don't exist.

"If we are to make a change, we all have to be part of the solution."

The four St. Albert winners will be honoured at the Top 30 Under 30 magazine launch party in Calgary Feb. 7, Ettarh said. The magazine will be available online on Feb. 6 at acgc.ca.