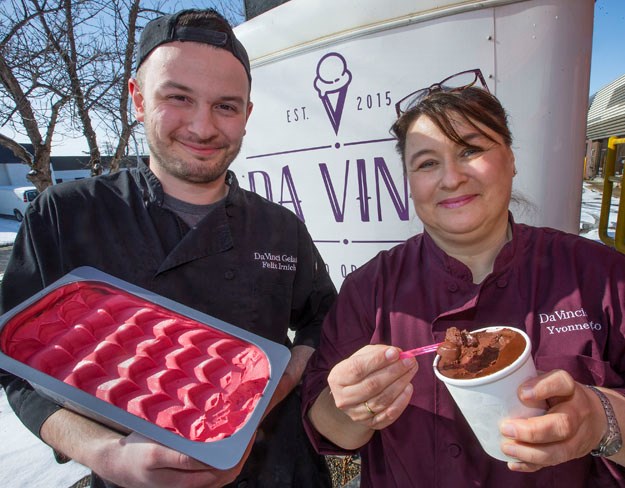 Da Vinci Chief Operating Officer Felix Irnich and Yvonne Irnich, the St. Albert company's Chief Executive Officer have steadily built the local business up from its humble roots in 2015 and now have products in city restaurants and grocery stores and are expanding operations in Riel Business Park.

After several years of success with traditional gelato, DaVinci Gelato Originale has broken into the dairy-free gelato market.

CEO Yvonne Irnich has launched a new line of dairy-free, vegan gelato. Although the company has always made classic Italian sorbetto, which is dairy free, Irnich kept hearing from her customers that they were interested in a dairy-free gelato product that catered to people with allergies to traditional gelato.

“I think there is really a demand there. Plus we are gluten-free and egg-free. Most of the allergens are gone,” Irnich said.

This summer the St. Albert company will be rolling out pints across the country for allergy prone consumers to enjoy.

When they first started, the family-run business was creating large tubs of gelato for restaurants but after a high demand for portions to take home the company launched pint-sized portions of their traditional dessert.

Parents soon began to ask for alternatives for their children with allergies who could not enjoy the traditional gelato product. The parents inspired Irnich to perfect a line of gelato that allergy-prone children could enjoy.

The company is keeping up with ice cream giants who are also launching dairy-free lines. Ben & Jerry’s recently launched a dairy-free line, although Irnich said that the product does not have as much flavour as the DaVinci products.

Felix Irnich, Yvonne’s son who works in the family business, said that their product is different because they don’t consider their dairy-free line a second-rate product.

“The thing that is different is that a lot of people think of the vegan stuff as a substitute, so they make a B-quality recipe to live up the dairy version,” Felix said. “It’s not running in second place.”

The senior Irnich said it took lots of experimenting with different kinds of alternative milk products before she nailed down the exact flavour and consistency that she wanted in her new vegan line.

“It was a lot of development for the flavours because I made every flavour from scratch,” Irnich said.

The texture and flavour for the dairy-free products are created by mixing soy milk, almond milk and coconut milk to get the perfect flavour profile for the dessert.

“What I like is most people don’t even notice that it is a dairy-free gelato. When I tell them they are dairy-free they are totally surprised,” Irnich said.

Irnich approached the provincial vegan and vegetarian organization and hosted them for a tasting session and the company got the stamp of approval. Soon their product was in vegan restaurants in the capital region.

“I would love to make people aware that there is something out there that tastes great and you don’t have to make a sacrifice in taste,” Irnich said.

This summer they will have four dedicated dairy-free flavours in stores across the country: chocolate, coconut, strawberry lemonade and tropical mango.

The four flavours will be the first of the dairy-free line in grocery stores across the country although Irnich has mastered many other flavours including pistachio, apple pie and cookies and cream.

The local dessert mogul got her start making gelato when she was 17 years old in Germany. An Italian gelato expert taught her everything he knew about making gelato and shared his traditional recipes with her. Irnich spent two years practising and perfecting the creation of the ice-cold European dessert.

Irnich mastered her craft but at the time there was no money to invest in making gelato. Instead she started working in the construction industry, got married, and had two sons. Her family immigrated to Canada and Irnich continued to work in construction for most of her career, all the while her heart was really in the gelato industry.

“It was always in the back of my head,” Irnich said.

Finally, a small moment with a friend inspired her to finally take the plunge and pursue her passion. Her friend, a teacher, asked her students what is it that inspired them to jump out of bed in the morning. Irnich realized she did not jump out of bed for construction but rather her heart had always been in gelato.

The final push came when an arsonist struck one of her construction sites and the whole thing burned to the ground. That night on the drive home, Irnich and her husband Johannes decided to take the plunge and start creating desserts.

In 2015 they opened a production facility in Riel Park. That same year they started selling at the St. Albert Farmers' Market and soon they had their product featured in restaurants like Famoso.

The company has had so much success since they started that they have expanded their shop and now take up the space next door. They currently have space to create around 1.5 tonnes of dessert a day, but after their expansion they will be able to significantly increase their output and make another tonne a day.

Currently they offer the original Italian gelato line, a sorbetto line, the new vegan and dairy-free product and they offer tiramisu and black forest cake exclusively for restaurants.

DaVinci’s dairy-free line will be available in grocery stores across Canada this summer.