You probably don't know how smart your city already is. "You're smarter than you think," Maya Pungur-Buick, St. Albert's general manager of corporate strategic services, told a crowd last week.
0
Apr 23, 2016 12:00 AM By: St. Albert Gazette 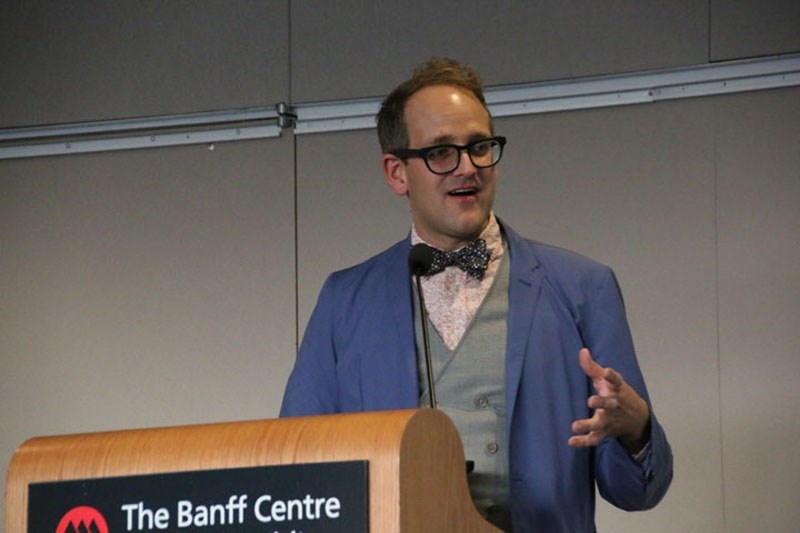 Shawn Micallef was the keynote speaker at the Alberta Smart City Symposium.

You probably don't know how smart your city already is.

For instance, St. Albert already has 80 things that could fall into the "smart city" category, she said. But initially there was no strategy behind it, though that has shifted with the introduction of a St. Albert smart city manager and the soon to be unveiled smart city master plan.

Use one of St. Albert's mobile apps, like NextBus to find out where your bus is, or Spruce It Up to report a pothole?

Spotted those cameras perched up on traffic lights around the city?

That's all "smart," where smart means using technology or some kind of innovation to help make a city run better for residents.

What is smart city?

Nearly everybody has a different definition of what exactly smart city means. Usually an answer has something to do with technology.

But Dalibor Petrovic, a partner in consulting with Deloitte, said during his presentation at the symposium that if you peel back the onion, you'll find the key core characteristic of a smart community, an intelligent community, is the ability to leverage innovation.

"Innovation is the only definition that you need to know," Petrovic said.

In turn, he defined innovation, making it clear that innovation is not the same as invention.

Invention is a novel creation, he said.

"Innovation is a novel creation that produces value," he said. "What we need to be focusing on is not investing further in invention, but investing in implementing it, in creating that value, and that will be the difference between a successful smart city and the one that isn't," Petrovic said.

Innovation can be as simple as coming up with a new way to deliver a service, or a new spin on an existing product.

Shawn Micallef, the event's keynote speaker and a Toronto-based journalist who specializes on urban issues, said municipalities have the capacities to be leaders when it comes to change, be it technology or social norms, when compared to provincial and federal governments.

That's in part thanks to the smaller size of even Canada's bigger cities when compared to the provinces.

"Cities can jump. They can pivot," he said. Municipalities of all sizes facilitate individuals' everyday life, 365 days a year, by providing everything from garbage pickup to recreation centres.

About 80 per cent of Canadians now live in some kind of town or city, he said. That's a big shift from even a century ago.

At the symposium, a myriad of applications of the smart city concept were presented.

From intelligent traffic systems to urban farms, the smart city label can be applied in a vast number of ways.

Kalen Pilkington, a former City of St. Albert employee who is now a director in MacEwan University's office of sustainability, argued that smart city work should be viewed through a sustainable lens.

Smart and sustainable can meet in a variety of ways.

"By fostering social interactions, with the aid of technology, we can create happier cities," Pilkington said.

Mark Archibald gave a talk on sensors and the "Internet of Things."

Archibald, chair of applied research in the School of Information Communication and Engineering Technologies at NAIT, said it's "actually a little bit too easy to gather data."

There are predictions that the number of things connected to the Internet – from traffic sensors to sensors in household appliances, will grow to at least a couple dozen billion in the next four years.

Harnessing that data will be key. But there's also an Internet capacity issue. A fast, robust high speed, high-speed capacity network is the foundational backbone to enable smart communities in the future, Archibald said.

A perennial favourite example of how smart city approaches can help citizens is on the road.

Tony Qiu is the director of he University of Alberta's Centre for Smart Transportation.

In an interview, he pointed out that smart city transportation technology can range from the potential for connected vehicles – cars that talk to the intersections and other cars – to something as simple as a mobile app Edmonton residents can use to see traffic problems as they're reported.

Using data gathered through technology can also help with traffic analysis, and has the potential to help drive capital project decisions, Qiu said.

From an online community that is tapped for surveys to the city's open data initiative, Edmonton has seen results. Those results include money-saving ones, like a program that's helped address false alarms, resulting in a 52 per cent reduction in human-error alarms in the last year, saving about $60,000.

Opening up data has also allowed citizens to do their own analytics, including coming up with their own applications and innovations.

Speaking of innovation, General Electric has come up with a new twist on an old standard – a light standard, that is.

The company has developed a "plug and play" node that can be attached to GE LED street lights to give the street light a wireless connection and enable cities to pick from a number of types of sensors and uses they'd like to employ, from detecting gunshots to detecting parking spots.

"This street light infrastructure goes through every city," said Scott Fawcett, GE's director of Western Canada for Intelligent Cities. Fawcett was at the conference to moderate a panel.

But not all smart city innovations need to be technologically advanced. In fact, Paul Hughes, one of the founders of Grow Calgary, suggested that it'd be awfully smart of communities to start looking at urban farming on underused land.

Grow Calgary is a large urban farm that is run on transportation utility corridor land. The land would otherwise sit mostly untouched.

All of the produce grown at the farm, which is run by volunteers, goes to various agencies in Calgary.

This city has set out a goal of being a "smart city centre of excellence." While there are a number of initiatives that could already be considered smart, with more to come, to start with there wasn't a plan.

Pungur-Buick said during the panel that changed when St. Albert's city manager, Patrick Draper, arrived and wanted to see an overarching strategy.

The result of that desire should be made public soon. For a couple of years, a committee of residents, with the help of some councillors and city staff, have been hard at work on a smart city master plan, expected to make its public debut as part of the May 24 council agenda.

While the plan hasn't received a stamp of approval from council yet, Coun. Cathy Heron gave a bit of a preview of the plan's content during the symposium.

Heron, who is the council representative on the committee, said there are more than 20 key strategies identified for the community, along with a set of actions to be taken.

She only gave a handful of examples, but they include pursuing an open government approach, developing a sensor array, expediting the development of an intelligent transportation system, enhanced municipal customer service and engagement and more.

Almost every item has a dollar figure beside it, Heron said, which means council will have to agree to each project, likely during budget time.

"It's going to be expensive," she said.

She noted part of the plan is to expand the city's network infrastructure to connect municipal facilities and assets, and form the foundation for improved community connectivity.

She also suggested other cities pursuing smart city plans should consider engaging the community at several levels. There are other municipalities waiting to see St. Albert's plan in hopes of using it as a blueprint for their own approach to smart cities.

"Frankly I think we're one of Canada's smartest cities currently," he said.

Bruno Peters is the chair of St. Albert's smart city committee. He also works for IBI Group and attended the symposium.

He said one of the most interesting things he found during the symposium was how advanced St. Albert is in the smart city conversation. Even people who weren't from St. Albert could be spotted occasionally using St. Albert examples, he said.

"The whole point of making it smart is about doing things better for the betterment of the people who are trying to live and do business within the community," Peters said.