I recently had the opportunity to test drive not one, but two Toyota Highlander models. One a hybrid, the other not. For the 2014 model year the Highlander is longer and wider than the previous generation.
Sep 6, 2014 12:00 AM By: Garry Melnyk 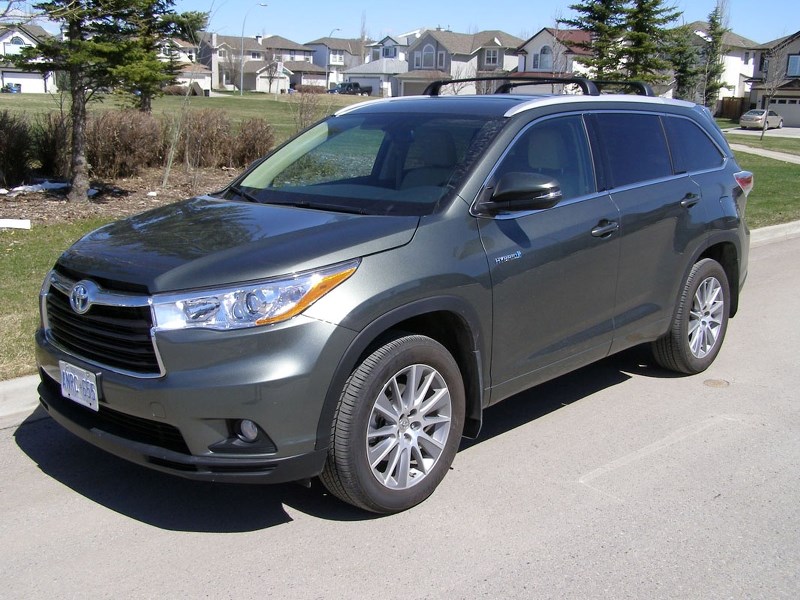 I recently had the opportunity to test drive not one, but two Toyota Highlander models. One a hybrid, the other not. For the 2014 model year the Highlander is longer and wider than the previous generation. This SUV is available, as I mentioned as a hybrid, and also in FWD and AWD. Competing directly with the Ford Explorer, Nissan Pathfinder and Kia Sorento, the Highlander has three rows of seating, a long list of options and a very comfortable and eye appealing interior. Normally I’m not a fan of full-size SUVs but the Highlander won me over. All it took was a three-hour, one-way highway trip to convince me it’s an ideal family vehicle. And for a growing segment of the population it is. Even my oldest daughter now with two children, wouldn’t even think of a mini-van to haul around her family of five. For now a small wagon does the job but an SUV is under consideration.

There is a lot to like about the Highlander which although bigger, is on the same wheelbase of the outgoing model. Buyers will enjoy many features such as the split instrument panel which has a large shelf that’s perfect for holding everything from smartphones to diaper wipes. The centre console is huge and the sliding armrest means it also works well as an armrest. In front of the driver the soft-touch instrument panel is uncluttered. The touch screen works well, setting up the Bluetooth hands-free system with my android cellphone was easy as pie. A backup camera is standard for all Highlander models and it’s a good aid for reversing as rear visibility is limited.

Interior quality and ergonomics are both first-class in the Highlander. Second-row seating is easy on the legs for adults and third-row seating has been improved. The third row is really for the kids as is the norm in many other similar sized SUVs. With all seats deployed, there’s just 390 litres of cargo capacity behind the third row. And if you don’t want to open the rear hatch door the rear glass opens on most models so you can toss gear in the back.

All non-hybrid Highlanders will come with the 270 horsepower 3.5L V6. Mated to a six-speed automatic transmission and when linked to an AWD system, it pulls well. Fuel consumption with my test LE worked out to 11.5 L/100 km around the city and 9.4 L/100 km on the highway. The LE priced out at $38,803.45 with $2,800 in options including; 3-Zone independent Automatic Climate Control, integrated SiriusXM Satellite Radio, eight-way power adjustable driver seat, power lumbar support (driver only), cloth and Softex heated front seats, flip-up rear hatch glass, power rear door with jam protection, leather wrapped steering wheel and shift knob and fog lamps.

My XLE hybrid was loaded with features and included a 280 hp rating for the carry-over 3.5 litre V6. Fuel-economy is rated at 6.7 L/100 km city and 7.2 L/100 km highway. My highway run at 120 km/ph both ways with a little city driving resulted in 9.4L/100 km. Go easy on the right pedal and you might be able to achieve the lower consumption. Worth noting is being able to run on battery power to about 30 km/ph. The hybrid XLE has a long list of features so no wonder that combined with AWD and the hybrid system the price tag exceeds $47,900 before taxes.

Ride and handling for all Highlander models has been improved with a new multi-link rear suspension. I found both versions I drove were stable at speed and very capable at handling sweeping corners with ease. In a straight line, the SUV is no shuttle booster but has enough oomph to prevent embarrassment at the on-ramp. A little more horsepower and increased torque for this model haven’t made a big difference but every little bit helps. Get a Highlander without AWD and the engine will have a little less weight to haul around.

The 2014 Toyota Highlander gets my vote as the right size for a family of five particularly if said family is located outside an urban area and regularly commutes on the highway. I give it high marks for powertrain, interior style and function and a more sophisticated and good looking exterior.