Impreza impresses with practicality and price

Franz Kafka once said; "First impressions are always unreliable." There is certainly some truth to his observation as I found out after spending a week driving the Subaru Impreza.
0
Sep 23, 2015 12:00 AM By: Garry Melnyk 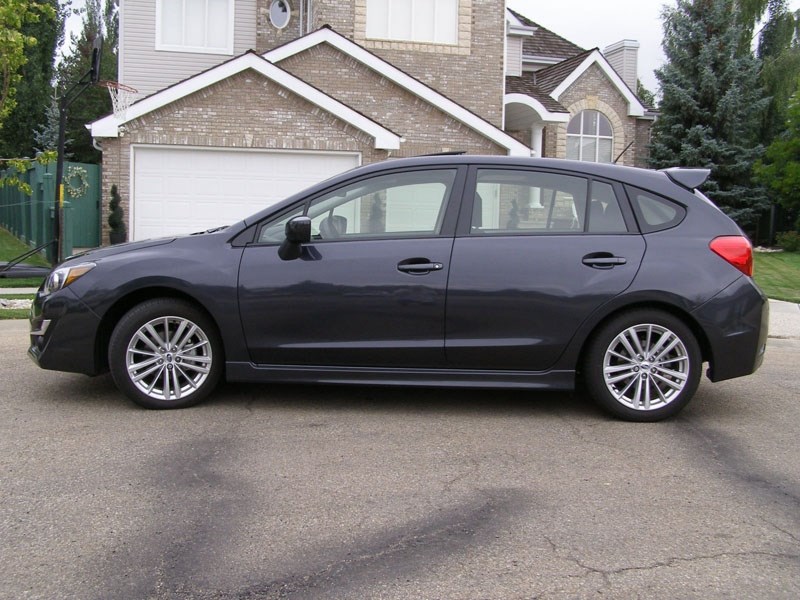 Subaru has done a major makeover on the 2015 model

Franz Kafka once said; “First impressions are always unreliable.” There is certainly some truth to his observation as I found out after spending a week driving the Subaru Impreza.

When I first climbed into the driver's seat of the five-door Sport Package hatch, I was less than impressed facing an instrument panel not really looking like something from this decade. Some of the switches and controls have a certain ’90s feel and look. Not what I was expecting as previous seat time in other Subaru models was most enjoyable.

So I tell myself not to pre-judge the Impreza. After all it is an entry level car with a base price under $20,000. Good value for the money as the Impreza is AWD. So I make myself comfortable and quickly appreciate the very comfortable, cushy, yet supportive driver's seat. I adjust it for my tall frame and then start the car ensuring the gearbox is in neutral and the handbrake is on.

Two more negative impressions emerge; the gearshift feels much too rubbery in my hands and the engine makes a coarse sound at startup and idles in a less than smooth, silky idle I was expecting. Yes I know the engine is a flat-four power plant not unlike the air-cooled engines that once powered the old VW Beetles. As I go through the gears before setting off from home I'm thinking my old ’98 Contour had a much smoother transmission. Putting it into first and lightly letting off the clutch, I find little gas is needed to get moving and as I continue on it becomes apparent I'm going to need some practice to shift properly and not jerk the car every time I leave a stop light.

The drive back to the house goes well and I soon begin to appreciate the supple, but well tuned suspension. Potholes, bumps, road irregularities are nicely tuned out and the Impreza rides as well as some other cars costing many dollars more. Although I'm driving a more basic model, I soon find pushing hard through turns demonstrates this Impreza gives up nothing in handling. For the average person, this model rides very well.

Once home I’m curious to find out what the rear seat room is like. More positives, the rear doors open wide making it easier for people to get in or for a parent to place a child in a car seat. Climbing in behind the driver's seat I'm pleasantly surprised to discover a six-foot person will be comfortable if a person of similar height is sitting with the front seat adjusted back for their size. Behind the driver and front passenger is plenty of cargo space, just over 638 litres with the 60/40 seatback up or 1,485 litres with the seat back flat. As the days go by I grow accustomed to the shift action of the gearbox and the raspy nature of the engine. The 2.0-litre four does smooth out becoming much quieter at higher speed. Combined with good use of sound insulation and lack of wind noise, the Impreza is very quiet inside helping to make it a very good long distance hauler. I really like the seats and HVAC system, large windows and easy to read instrumentation although a real water temperature gauge and oil pressure gauge would be welcome.

I should point out the premium infotainment system includes a voice-activated GPS navigation and a seven-inch, high-resolution, multi-gesture capacitive touch screen. The system also features Bluetooth® connectivity with voice recognition in English and in French, SMS text messaging capability, digital media support and Subaru STARLINK apps and services. For the hardcore audiophile, there’s Aha Radio®, iTunes® tagging and the ability to store up to 36 different radio stations including satellite radio station presets.

The 2.0-litre four cylinder engine could use more power. It's rated at 146 ponies and 150 lb.-ft. of torque. A five-speed manual transmission is behind the engine in my tester. A six-speed manual would be desirable with the extra gear to drop rpms. The engine turns at 3,000 rpm when cruising at 120 km/ph. That's too high in my opinion although the engine needs such a high rpm for passing or it will bog when you need a little extra push to get around another vehicle. I don’t get much time on the highway so around town with a little freeway cruising I manage 7.9L/100km on regular fuel. An optional CVT transmission is offered and will probably be the choice of most buyers.

Subaru has done a major makeover on the 2015 model, but surprisingly did not increase the base price of $19,995. And I’ll say this, for an AWD car you’re getting a deal. The CVT transmission takes the base to $21,295. There are a number of trim levels with the Limited Technology Package being the high-end model retailing at around $30,000. After a week in the Impreza 5-Door Sport my first impressions were forgotten. This is a very good car for our climate, no matter what the season.