Is an electric car right for you? 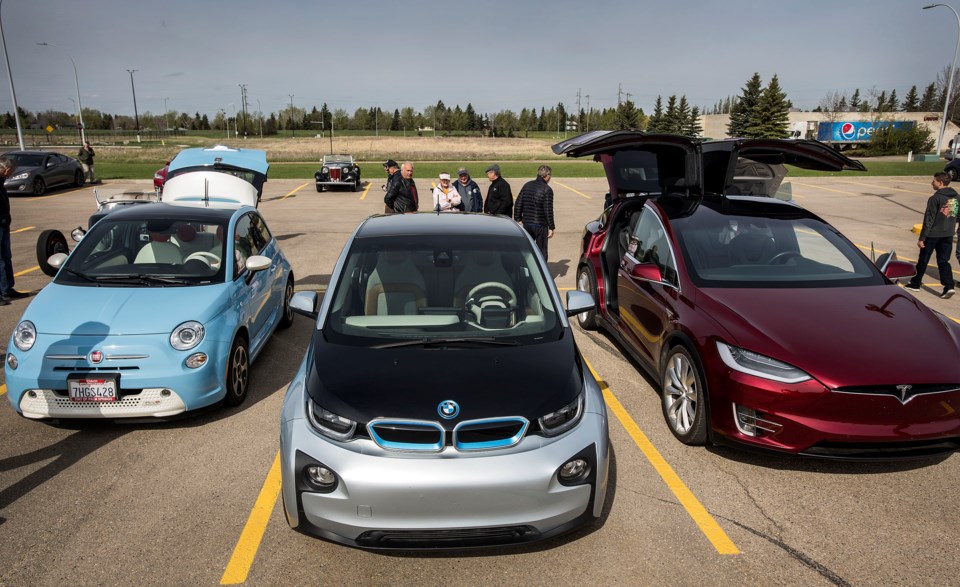 R U EV? – Edmonton area car collectors gathered for a unique ride/drive car show where guests can ride in and drive classic cars and electric vehicles at the Century Casino parking lot in St. Albert on May 18, 2019. Here are a trio of electric cars: 2015 Fiat 500e, left, 2014 BMW i3 and a 2016 Tesla Model X SUV. Art Rutledge of St. Albert, owns the BMW and Marilyn Simonsmeier, also of St. Albert, owns the other two.

It took a lot of saving and effort, but I finally have my electric car.

I’ve been driving an all-electric Chevy Bolt since January. It’s fast, quiet, and saves me at least $880 a year on fuel and maintenance compared to my old Honda Civic hybrid. Best of all, because I buy green power, I can now drive without polluting the air.

It was worth it for me, but how about you?

Electric vehicles (EVs) use electricity instead of gasoline as fuel. Some just have batteries, while others are plug-in hybrids that also have gas engines or generators.

With 37 models of electric car now available in Canada and a $2,500 to $5,000 federal rebate available for many of them, now is a great time to give EVs a closer look.

EVs have sparked to life in Alberta in recent years, with over 2,000 now on the road, reports Andrew Bell of the Electric Vehicles Association of Alberta – that’s compared to maybe 500 just three years ago. A study commissioned by Clean Energy Canada last March found that some 71 per cent of Canadians think EVs will be the majority of new cars sold within 15 years, with 54 per cent saying they would be at least inclined to buy one.

There are a lot of reasons why people buy EVs.

For Bell and I, it was the environment. About 20 per cent of Canada’s heat-trapping pollution comes from gasoline burned in cars and trucks, reports the Prairie Climate Centre. A 2015 analysis by the Union of Concerned Scientists found that a mid-ranged EV produces about half as much heat-trapping pollution as a regular car over its life once you account for its manufacture and operation.

Research by Simon Fraser University shows that even in coal-heavy Alberta, an EV will produce 45 per cent less greenhouse gas emissions per kilometre than a conventional car – 100 per cent less if you buy solar power as Bell does.

“Our electric car (will be) powered by the sunshine,” he said.

For others, it might be cost savings. Electric motors contain few moving parts and are far more efficient than gasoline ones, so you save a lot on fuel and maintenance, said Mary Mallin, an EV educator with Plug ‘N Drive, the non-profit advocacy group that runs the Electric Vehicle Discovery Centre in Ontario. Her research suggests that it costs about $385 to fuel and maintain a Chevy Bolt for a year in Alberta, or about $1,860 less than the equivalent conventional car.

St. Albert car collector Art Rutledge owns a Tesla Model S and a plug-in hybrid BMW i3 and has bought and sold three Nissan Leafs. (He’d loan them out to people to try and they’d end up buying them off him, he explained.) He got into EVs because of their ludicrous speed.

“When you push down on the accelerator, it’s like the hand of God is pushing you through the air,” Rutledge said.

EVs can do this since their motors provide instant torque, allowing you to go from stop sign to speeding ticket in seconds. Even my Bolt, which is hardly a sports car, can do 0 to 60 mph in seven seconds, Car and Driver reports.

So should I get one?

“EVs aren’t for everybody and they’re not a do-all car,” Rutledge said.

If you need a pickup truck for work, for example, there’s not one currently on the market. If you regularly commute to Fort McMurray, you might struggle to find a pure electric vehicle with that kind of range. A high-end EV can go from here to California with proper planning, but the more affordable ones can’t, Rutledge said.

But how much range do you need?

“Take a hard look at what you do for driving,” Rutledge said: if you’re like most Canadians, you’re probably driving less than 50 km a day, and even the cheapest EV on the market in Canada can go that distance.

You can get a plug-in hybrid if you’re worried about range, Mallin said. Most go for 500 to 1,000 km per charge and gas tank, compared to 200 km for most all-electrics.

Mallin said cost is a big barrier to some, as EVs can cost about $10,000 more than conventional cars. While you make that money back in savings (within five years in most cases, assuming you get the $5,000 federal rebate), you still need that cash up front.

“For most people, that’s way out of their price range,” Mallin said.

Rutledge said one solution is to buy used. He picked up his Leafs from the U.S. for under CAN$15,000 each, and B.C. has plenty of used EVs available.

You’ll likely need an outlet at home for an EV, as there aren’t many public charging stations. That can tough if you live in a condo or apartment, Bell acknowledged – your board might require you to put in your own power line.

Bell and Rutledge say EVs are an ideal second car for a two-car household – you use the EV for daily drives and the gas car for camping trips. Otherwise, figure out how much you actually drive each day, find a model that can do that, and see if you’re willing to pay its up-front cost.

“I think people will find there are actually a lot of EV options that would fit their lifestyle,” Bell said.

Bell said there are a handful of dealerships in Edmonton with EVs available to test drive. Be warned, though – if you’re anything like me, once you’ve driven electric, you’ll never want to go gas again.