"When people do not listen to the ... public health advice, they are directly putting the lives of their loved ones, colleagues, friends and society members at risk,” said MD and family physician Bailey Adams.
Mar 20, 2020 10:06 AM By: Hannah Lawson 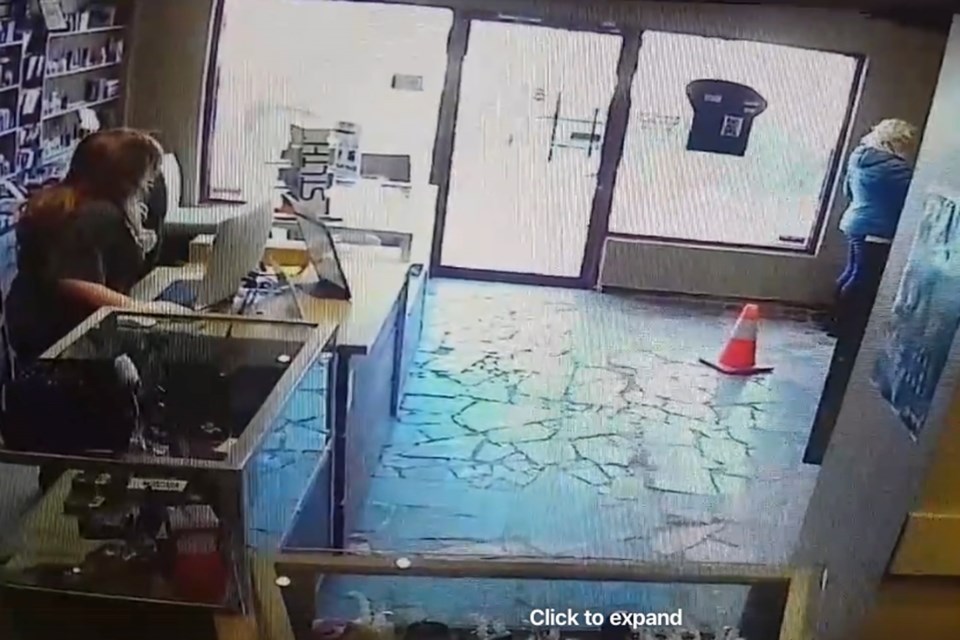 A woman, right, coughed in the face of Saint City Vapes owner Tammy Formoe when she was asked to leave the store. The woman, who told Formoe she had recently returned from travelling, had not self-isolated.

The owner of a St. Albert vape shop says she was shocked and angry when a customer purposefully coughed in her face after being asked to leave the store because she should be self-isolating.

“She bent over and started hacking as hard as she could on me,” said Saint City Vapes owner Tammy Formoe. The incident followed Formoe asking a woman to leave the shop, who had disclosed she recently returned from holidays.

A video posted to the company’s Facebook page confirms the incident, and has received more than 26,000 views and over 200 shares.

It was not the first time the woman visited the store. Formoe said she came in to use the Bitcoin machine on Tuesday night, which was broken at the time.

Before leaving, the woman leaned over the counter and said she would head to Costco, laughing that she had no idea what to expect since she has been away on holidays.

“She said, ‘Don’t worry, I came from a safe country,’” Formoe said.

People returning from any travels are being asked to self-isolate for two weeks, in an effort to contain the spread of COVID-19.

On Tuesday, the Alberta government declared a public state of emergency.

When the woman returned the next day, Formoe repeatedly asked her to leave and told her she should be under self-isolation.

“She said I was fear mongering and that I was an idiot, and refused to leave.”

Formoe emerged from behind the counter to unplug the Bitcoin machine, hoping the woman would be forced to get out. Instead the woman leaned down and dramatically coughed in Formoe’s face.

"I could barely breathe in here from all the Lysol after she left, because of course the first I'm doing is spraying down the machine," Formoe said.

The Saint City Vapes owner said the incident made her “very angry,” and she posted footage from the store’s CCTV camera in hopes of identifying the woman and pressing charged for trespassing or mischief.

“She's coming in contact with people that they could be seriously hurt by this, you know, so it makes you very angry,” she said, adding a customer who was in the store at the time lives with a senior with health issues. “People aren't taking it seriously at all.”

MD and family physician Bailey Adams said it is not an “alarmist reaction” to encourage self-isolation, but rather is an attempt to flatten the curve and “save as many lives as possible”

“And when people do not listen to the ... public health advice, they are directly putting the lives of their loved ones, colleagues, friends and society members at risk,” Adams said. In early phases of contracting COVID-19, there is a chance of people spreading the virus even if they are not displaying any symptoms.

That means people returning from travels should make a beeline from the airport to home and ask family or friends to help deliver groceries and medications, she said.

St. Albert RCMP Const. M.J. Burroughs called the incident "clearly serious," but the only recourse in Formoe's case would be the right to refuse service and issue a trespass notice.

"Right now we don't have direction, we don't have the ability to order anyone to get tested," she said. "We are just following exactly what Alberta Health Services is coming down with."