The fire that burned through the St. Albert seniors' complex May 6, "appears to be non-suspicious.”
May 16, 2021 8:00 AM By: Jennifer Henderson, Local Journalism Initiative reporter 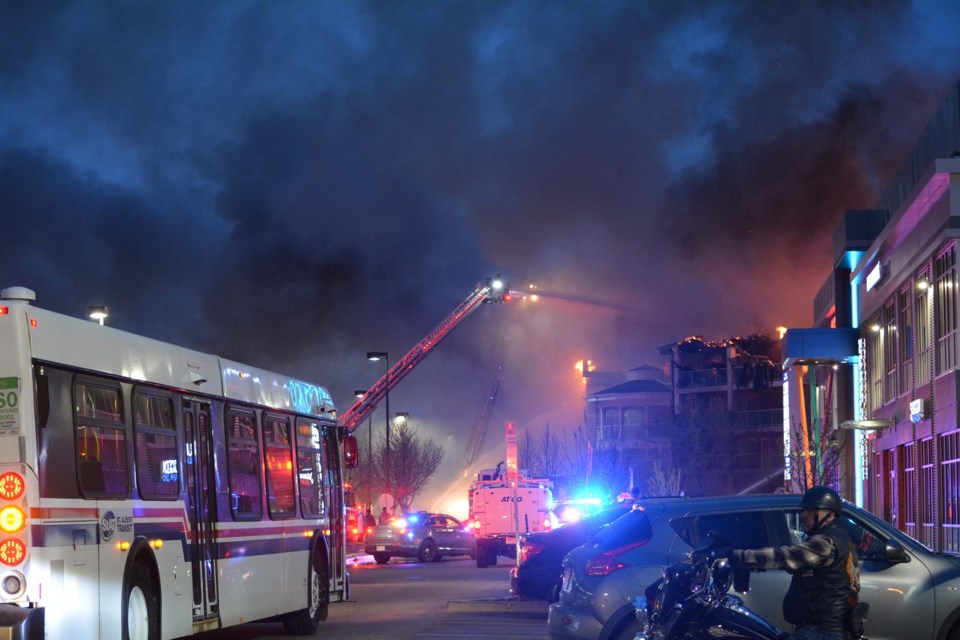 The cause of the Citadel Mews West fire has been designated as "undetermined," and while the investigation is ongoing, the City of St. Albert acting fire chief said it is unlikely the cause will be uncovered.

Scott Wilde, acting fire chief for the city, said on Friday it would require new evidence to emerge to figure out exactly what sparked the wild blaze that tore through the seniors' home on Thursday, May 6.

“I think it's a high probability that it will (remain) undetermined. I think there would have to be new evidence discovered,” from things like a video or a witness statement, Wilde said.

It is common to end up with an undetermined cause of a fire, said Wilde, because the scenes are often chaotic, even after the fire is put out. The damage done to the building can make it tough to figure out exactly how the fire started.

“I think what we can say is that it appears to be non-suspicious,” Wilde said.

What the department knows is the fire went undetected on a patio, which allowed it to grow, spreading from patio furniture to the underside of the deck above. From there it travelled up the vinyl siding into the attic of the building and eventually ignited the roof. By the time it reached the roof, the fire became difficult to access, said a release put out by the city.

The path the fire took, climbing up the building, is common, Wilde said, because heat and fire rise.

The wind blowing that night made fighting the fire difficult, with wind speeds clocking in at 28 km/h. During grassland fires, any wind above 15 km/h is an issue casing the fire to grow, so Wilde said the wind made the battle more difficult.

“That is significant … it for sure was an issue,” he said.

“A fire like that is going to grow fairly fast, no matter what. It just created one extra item that we had to be on top of,” Wilde said.

As the fire grew in the wood building, the department knew they needed more help and called out for mutual aid from Edmonton, Strathcona County, Morinville, and Spruce Grove. Wilde estimated there were 85 to 100 firefighters on scene battling the blaze.

This was the largest fire Wilde has battled in his 21 years with St. Albert Fire Services. He said he was part of the command centre helping to organize the dozens of firefighters. But he said the procedure for fighting a big fire is the same as battling a small blaze, with the size of the fire scaled up.

While the procedure for tackling the fire was the same as for a smaller blaze, the complicating factor that night was the residents inside the building.

If firefighters are up against a smaller building, where they know all the occupants have been evacuated, the way they tackle the fire is different.

“We'll risk a lot to save a lot, and we'll risk very little to save a little,” Wilde said.

But if there is somebody in left in the building or there is a risk a person could have been left behind, the fight against the fire is different.

The department knew the building next door was a long-term care home, so they needed to prevent spread.

With seniors who have mobility issues, evacuation can be challenging, especially if emergency responders have to spend time helping to get residents out rather than battle the flames.

The health conditions of some of the seniors, particularly those with dementia, made it more difficult.

“It takes too many of our resources from putting the fire out to rescuing. It's really hard to kind of manage the fire,” Wilde said.

Volunteers on scene helped keep residents organized and looked after so the firefighters could focus on extinguishing the blaze.

While the department evacuated the building, one woman with dementia was found hours later sitting on her bed, and Wilde isn’t quite sure how that happened.

Fire services did two sweeps of the building to ensure residents were out, with the first initial look as quickly as they could to make sure there was nobody left inside.

“If they are scared, they might hide, but we wouldn't miss somebody laying on a bed, for instance, in a primary. If someone was hiding in a closet or under a bed or moving around, they could avoid it, if that's what they chose to do,” Wilde said.

After the primary search was done, emergency services started a secondary look through the building, which was more thorough, Wilde said. Firefighters looked through closets, bathrooms, in beds and under piles of laundry to ensure there were no unconscious people missed in the first search.

“How she got back on the bed afterwards, that's somewhat of a mystery,” Wilde said.

There was a list of residents the department was concerned about, and the woman who was found on her bed was on the list.

Wilde said through the night he asked for updates on the woman and they eventually went back into the building a third time, when they found her in her room.

The fire department stayed on scene until Sunday morning, May 9, at around 7 a.m. when they were sure all the small smoldering spots were completely put out.

The extent of the damage to the building has yet to be determined, and Brian Farrell, CEO of Christenson Communities, who owns and operates Citadel Mews West. He said they will find out the fate of the building in the coming weeks.

Farrell said they don’t know if parts of the building can be salvaged or if the entire thing will need to be torn down.

If the building is lost, Farrell said they may not rebuild right away, because the price of lumber and copper are so high. It may be more cost-effective to wait until prices come down.

“We're doing some other construction and our prices have gone up 30 per cent since January,” Farrell said.

It could take six to nine months for the building to be assessed and slated for demolition.

“I would say, if we were to do a rebuild, if it was up and erected within two years, it would be another miracle. It takes 18 months to rebuild,” Farrell said.

While the future of the building is still unknown, residents will be able to retrieve items from their suites through their insurance companies.

Farrell said most big items, such as beds and couches, were destroyed by the smoke and water, but many residents will be able to retrieve special items such as photographs and personal things.

The CEO has been through the building and he said it was difficult to see the damage – everything the residents hold dear is still sitting in their suites.

“It was pretty emotional that day of going through it, seeing all the pictures of the grandkids and their families,” Farrell said.

Farrell suspects the only people who won’t be able to get their items would be those on the fourth floor on the south side of the building where the fire burned. All the other residents should be able to retrieve some of their personal treasures.

The garage under the building and the dozens of cars parked there were saved from the fire. Many were driven home by their owners several days after the blaze.

With the building currently inhabitable, residents are being relocated and Farrell said they are trying to find alternative homes for everyone.

The CEO said they can’t wait years with residents living in hotels before the structure is safe again.

Of the 38 people who were living in assisted living – the government-funded rooms – 13 of them went to other Christenson properties in the area, while the other 25 were placed through Alberta Health Services at other facilities.

The 51 independent residents in the building are also being relocated, and some will be going to other Christenson homes with vacancies. Farrell said around nine of the 51 want to stay in St. Albert, so they won’t be able to stay with the company.

Due to COVID-19 and the inability for potential residents to tour seniors’ facilities, Christenson has enough vacancies to place all the residents at other locations through the region.

Although the toll on the building was high, there were no lives lost in the fire.

“I sort of view this as a disaster as a miracle – a disaster with the fire but a miracle. It's a miracle that every senior got out of that building,” Farrell said.

The fire department is happy they were able to battle the fire.

“We are very proud that we were able to do something like that,” Wilde said.

It was important for the firefighters to show that the system they had in place, which is very labour intensive and can be expensive, is worth it. The outpouring of support they have seen from the city has been overwhelming.

“It's very gratifying for me to say: 'Thanks to everybody for all your support,' ” Wilde said.