Last lap at the Ray McDonald 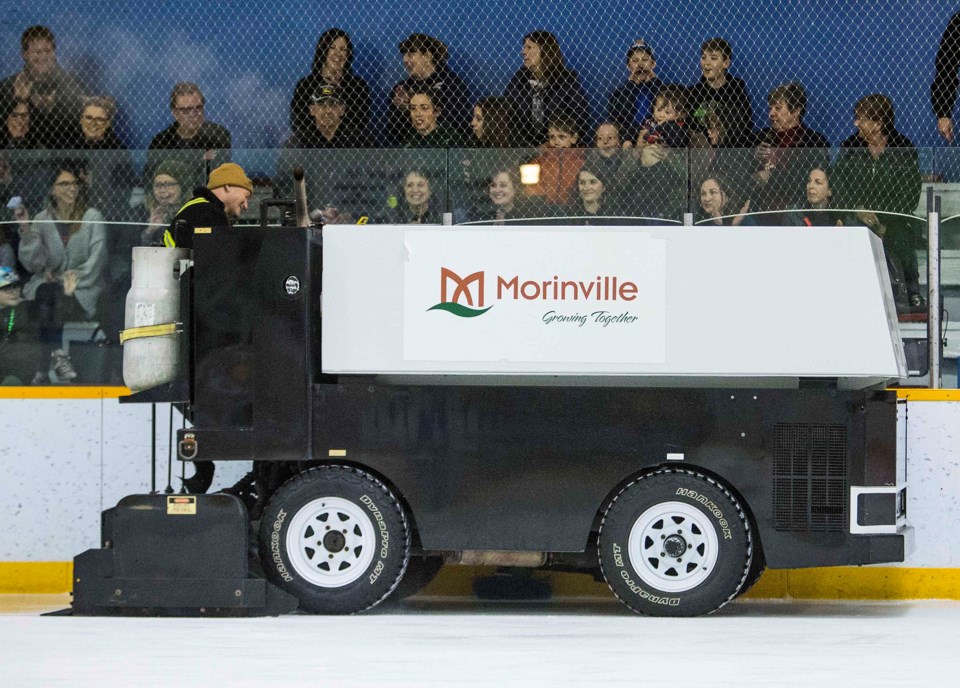 LAST LAP – Appreciative fans cheer on long-time Ray McDonald Sports Centre employee Roland Hebert as he completes his final lap with the Zamboni before the rink closed its doors for good last Sunday. Some 500 people attended the last day of public skating at the arena Sunday.

If you’ve ever strapped on a pair of skates in Morinville, you’ve probably met Roland “Rolly” Hebert. The 68-year-old is the Zamboni driver at the Ray McDonald Sports Centre and has been working there since about 1976.

“When we first moved to Morinville, I was hanging around the arena all the time,” he said, which was known as the Morinville Ag Society’s Agri-Plex in those days.

Elsie Tally, who worked at the rink most days, soon offered Hebert a job. Hebert said he learned the ins-and-outs of the facility from Tally, and when he moved on, started teaching his successors. In 1982, he became a town employee when the town took over the arena's operations.

On Sunday, the crowd cheered as he fired up his Zamboni and rolled out for a ceremonial last lap of the rink.

Sunday was the last day for public skating at the Ray McDonald. The venerable facility is to be replaced by the new rink at the Morinville Leisure Centre across town later this year.

Hundreds were in and out of the sports centre on March 17 for the send-off celebration, which involved free skating and shinny hockey, a Sturgeon Stings game, a special fundraiser game for the Recreation Without Borders program and Hebert’s last lap.

Mayor Barry Turner paid tribute to Hebert prior to the lap, praising him as a dedicated worker who would come in even on his days off to help out the teams.

“Rolly is synonymous with the Ray McDonald Sports Centre,” he told the crowd, and Morinville thanks him for his service.

Hebert said that last lap was a very emotional moment for him, what with all the crowds cheering.

“Definitely a tear or two in his eye,” added his co-worker, Donald Fairweather.

Sunday’s festivities included a display on the history of the Ray McDonald, which dates back to the Second World War.

Paulette Houle, the daughter of Ray McDonald, said the arena itself was originally built for the Royal Canadian Air Force in Edmonton in 1942. The Edmonton Exhibition took it over after the war but put it up for auction in 1959, wanting it either sold or demolished.

McDonald, the town’s fire chief, saw the building as a chance for Morinville to get its first indoor ice rink, Houle said. He rallied about a hundred volunteers to buy, dismantle, haul and rebuild the facility. The arena was complete in 1960, and was named in McDonald’s honour in 2006.

Morinville Jets president Brent Melville said he’s seen a lot of good hockey at the Ray McDonald over the years, including games with future Morinville NHL stars Bryce Van Brabant, Jason Holland and Brandon Hagel. He also saw a lot of pucks bounce off the ceiling, as the rink’s roof was unusually low.

Melville said he’d miss the arena, and that the Jets would still play there if it stayed open.

“We’ve got nothing against the new rink, but (this one) has got the history. We’ve played there for 40 years.”

Edworthy said crews would scrape the ice off the arena’s floor this week, after which it would be closed. The replacement rink at the leisure centre would open this spring. The curling rink will shut down on Sunday but reopen next season.

Hebert said he has a lot of memories about the Ray McDonald, including finding kids doing booze and drugs up in the rafters.

“I’ve seen people come up from five years old to adults,” he said – some of whom later apologized to him for being a pain in the butt while they were kids.

The arena is now history, but Hebert isn’t – he’s still on the job, and will roll out to flood the ice at the new rink when it opens.

“It’s going to be new management there, but I’m going to try and go along with them,” he said.