What would it look like for St. Albert residents to be able to track buses, snowplows and garbage pick-up in real time? Residents might get to test that out sooner than they think.
Nov 17, 2017 12:27 PM By: April Hudson 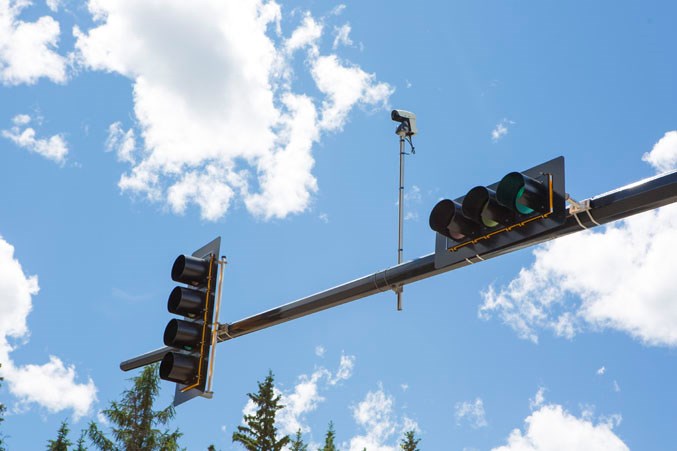 TRAFFIC SENSORS – Imagine traffic lights that would respond in real time to traffic conditions. St. Albert has been installing traffic detection sensors at intersections in order to be able to respond faster when lights go down or emergency vehicles need to get through.

What would it look like for St. Albert residents to be able to track buses, snowplows and garbage pick-up in real time? Residents might get to test that out sooner than they think. As the city pushes forward on its Smart City focus, digital access to that type of information becomes a reality through a proposed Smart City application. "The dream is ... that (residents) be able to access municipal services in an 'a la carte' manner," said Travis Peter, manager of Smart City and innovation for the city. "That's smart. That's actually data, that's information at your fingertips." Open data, transportation optimization and fibre optic connection are just some of the ways St. Albert is embracing technology. Partly an effort to stay relevant and partly a way to make the city more intuitive for residents and businesses, Smart City has won St. Albert global recognition. The city has been featured in international magazines, won awards and recently made the Intelligent Community Forum's list of Smart 21 Communities for 2018. Now, the city has set its sights on making the Intelligent Community Forum's Top 7 list. Robert Bell, co-founder of the Intelligent Community Forum based in New York, said St. Albert scored very high on some of the measures the group uses to determine its Smart 21 list.

In particular, St. Albert scored high on having a competitive market for broadband, which Bell said is a good measure of how affordable it is, as well as the percentage of people and places who have subscribed to broadband coverage. He called St. Albert's scores "impressive." Other measures the forum uses include technology adoption in schools; collaboration between local government, educational and cultural institutions and business; and how much work municipalities put into building common goals with those partners. The forum released its list of Smart 21 communities on Oct. 27. The top seven will be decided in February. Mayor Cathy Heron said she was "overjoyed" to hear St. Albert applied for the list and wasn't one bit surprised the city made the cut. "I knew that we would make it," she said. Heron has been a staunch supporter of Smart City and said during her campaign for mayor that she wants the city to aim for Canada's Smart Cities Challenge. One of the prizes for that challenge is a $10-million grant for mid-sized communities. "We've been saying to the world that we are leaders, and so we have to stay in front," she said. "Technology is changing at a rate that we can't even fathom. It's hard to stay in front of, but it's important." Peter has been in on St. Albert's Smart City efforts since the beginning in 2014, helping the city to create one of the first Smart City strategies in Canada. Since then, St. Albert has seen other firsts: it was the first city in Canada to launch electric buses; and it became the founder and leader of the Alberta Smart City Alliance, which now has more than 130 partners from industry, academia and other municipalities. "A lot of cities out there are now working in a Smart City context. It's a wave that's washing over all the cities, arguably, in the world," Peter said. Having a technologically savvy city means breaking down barriers between residents, governments and business. That includes streamlining municipal departments instead of having them all come up with individual services.

Leaping out in front

In 2018, St. Albert will see more leaps forward as it installs wireless, automated water meters. Residents will be able to use an online portal to check their usage and see if they have leaks. The city will also be launching its pilot open data system in 2018, where all of the data be posted online as it is gathered. Currently data is not automatically posted, although it can be accessed upon residents' requests. For Heron, open data holds some exciting possibilities. "Lots of cities have taken that leap to make everything we do available to residents in a very raw form. Then they can take that data to produce products, applications, they can produce business ideas through that information," she said. "It takes a lot of work off the municipality's plate." St. Albert will also be expanding its intelligent transportation system (ITS), which helps improve traffic flow and centralizes monitoring of intersections. Before that system was put in place, the city had to be notified by telephone when an intersection was down. But Peter said the city is running a strategy, which should be completed in 2018, to optimize the timing of intersections and sense vehicles in real time.

Bruno Peters is the former chair for St. Albert's Smart City committee. He said the intelligent transportation system goes beyond co-ordinating traffic lights and can help improve traffic flow on roads as well. "It's not just limited to cars. It's cars, trains, buses, cyclists," he said. Through ITS, traffic signals can make decisions based on road conditions, congestion and what kind of vehicles are approaching, such as emergency vehicles. "All those different sensors feed back into, typically, a central system that monitors and helps to make decisions," Peters said. Looking at the future, he pointed to both autonomous and connected vehicles communicating with each other as one way technology can help relieve traffic problems. Connected vehicles are still operated by motorists, but have the capacity to evaluate conditions and communicate with other vehicles on the road. "This is not pie-in-the-sky stuff; this is stuff that's happening in many regions around the world, where they're testing these technologies and seeing dramatic improvements in the capacity of the highways," he said. What might that technology look like in St. Albert? One obvious example Peters cited is Ray Gibbon Drive, which often experiences capacity issues. In the future vehicles may communicate with each other about things including road conditions, hazards, and traffic flow. Traffic lights could respond in real time to allow traffic to flow smoothly when conditions are good and react to sudden changes like emergency vehicles or icy conditions. Applying technology to these issues may mean a reduced need in the future for traffic-related infrastructure, like traffic lights and extra lanes, said Peters. Along similar lines, St. Albert currently collaborates with the University of Alberta and University of British Columbia on the Active Aurora Program, which Peters describes as a research initiative for connected vehicles.  He said St. Albert is currently talking with the University of Alberta to run pilots involving transit or emergency buses along St. Albert Trail, which involves the City of St. Albert, Alberta Transportation and the City of Edmonton. Currently those three jurisdictions do not share data. "That's a perfect corridor to test some of those concepts out. Again, that's about bringing down barriers and using technology to smooth the path," Peters said.