DETAILS Margaret Laurence and Jack McClelland, Letters Edited by Laura Strong Davis and Linda Morra $39.95 696 pages University of Alberta Press Book launches to be held at Sunworks in Red Deer at 3 p.m. on Saturday, Sept.
Sep 1, 2018 12:04 AM By: Scott Hayes 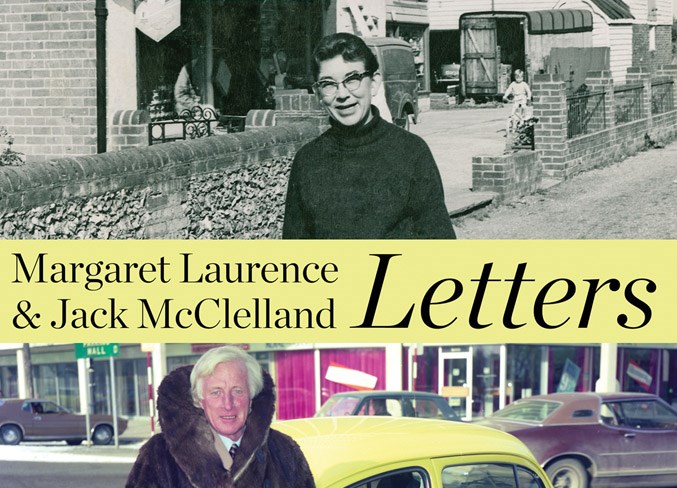 It goes without saying that Laura (Strong) Davis has a lot of love for Canadian literature (CanLit), especially the writings of the late Margaret Laurence. The Paul Kane grad and tenured literature professor at Red Deer College has just edited and published a new book focusing on the correspondences between her and publisher Jack McClelland.

Letters is Davis’ second book on Laurence, the first just coming out last year. One mustn't think that it will be her last.

“I’ve been working on her for quite awhile actually,” Davis said.

For many reasons, it seems like she was destined for this work. She says that she first developed a love of writing from W.D. Cuts teacher Gerry Buccini, a guy who taught her how to write "a good paragraph." His influence led to her first loving Language Arts and English.

Soon after, her mother started reading Laurence’s books including The Stone Angel and The Diviners. There was a resurgence of popularity in the author’s works at the time, Davis added, noting that she still remembers her mom sharing the sad news of Laurence’s passing at the breakfast table.

Davis couldn’t help but read the books too, as she furthered her literary education. She did her undergraduate degree in English at UBC before tackling her Masters at UVic, and finally completing her doctoral degree at the U of A. Her PhD dissertation was on Laurence as you might have guessed. She just loves how the author writes about the Canadian West in a way that resonated strongly with her as a reader.

“Reading her books felt like coming home. We read so much literature especially in school that’s not from where we are. These are my people. Her characters felt familiar. They felt like the people that were around me.”

She also felt a deep appreciation for how Laurence wrote about the daily struggles of women and how her stories incorporated characters of different nationalities and cultures. Those novels were popular at the forefront of the CanLit movement when they first came out and near the time of her death. Laurence might have fallen off the critical radar a bit since then but there’s a bit of a resurgence now and people are starting to look at her books again, said Davis, who seems to have never lost the love.

It’s through her studying the Manitoba author that she also developed her literary fascination with Jack McClelland, heir to the McClelland and Stewart publishing house, the place that literally built CanLit. It’s the place where such names as Laurence, Margaret Atwood, Mordecai Richler, Leonard Cohen, Farley Mowat, and Pierre Berton first hit the covers.

Davis remarked on McClelland’s flamboyant personality and willingness to do pretty much anything to promote CanLit and Canadian authors in general. He was really the first to stand up and do so.

“Jack was into these promotional stunts. He would go as crazy as he could trying to market his books. He hired a diviner to come in and divine some water while they were promoting Laurence’s book. He would stand on Bloor Street in fur coats. Apparently at one point, he wore a toga and gave out free books. He just would try to draw attention to himself and to his books and to his authors that he just believed in so strongly. He was hilarious.”

It was in researching her first book on Laurence that she discovered the treasures of personal writing between her and McClelland from the late 1950s to the mid-1980s. At first glance, these two people of such differing personalities might not have seemed like strong pen-pal candidates. It took five years of digging to compile and chronologize them through painstaking “detective” work at times. It turned out that they wrote to each other a lot. It even surprised Davis to see the finished product come in at nearly 700 pages.

It’s not the quantity of material that’s the most impressive; it’s what’s in the letters that is so telling and rewarding.

“They had such a deep respect for one another. He thought she was just such a brilliant writer and he would do anything for her. She really respected him as well and what he was doing for Canadian literature. Everybody thought he was nuts. He brought so many writers that we now know of to the foreground through his publishing company. I just think he’s fascinating.”

The letters between them are alternatingly and unexpectedly hilarious and heated, as the two knew how to trade barbs and debate from opposite ends of the spectrum. In some ways, they were like Abbott and Costello playing jokes off each other. At other times, they were the Odd Couple, unafraid to have feisty disagreements though not to the point of ever losing respect for each other.

This book sheds a lot of light on the early days of CanLit from two of its key players. It was important for Davis to produce this volume as a paean to two of her favourite literary heroes – she’s planning to work on a book solely about McClelland, too – but also as a retrospective of sorts on our national literature just as it was breaking out of its shell.

“If you look at what schools were teaching, even universities, prior to the 1960s, Canadian literature wasn’t even really a thing. Nobody really thought there was much there. It really is like looking in a mirror in a way and seeing our own literature reflected back and seeing how that process happened.”

For these reasons, she sees an audience beyond literary academics in university libraries. Even reading a few letters offers some wonderful insights and sparkling fly-on-the-wall moments of conversation between these two intelligent, creative and witty pen pals. If it weren’t for this being the end of the summer, this might have made the best beach book ever.