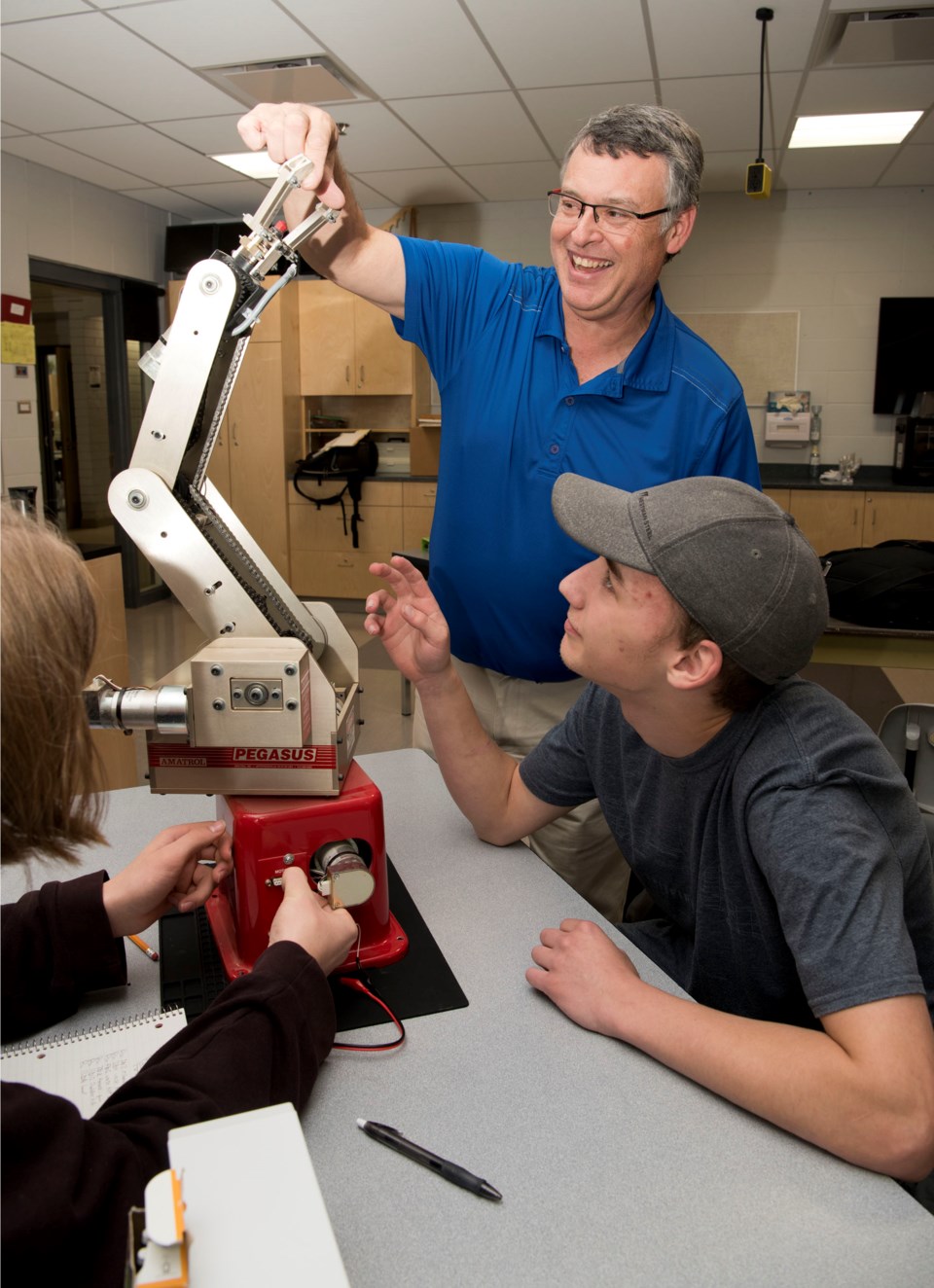 It’s lunchtime in the Robotics Club at Sturgeon Composite High School, but hardly anyone’s eating. The dozen or so students here are too busy building the future with the help of coach Kevin Hubick.

“Mr. Hubick!” says a young man seated by a big robotic claw as Hubick enters the room. “We got the hand going!”

“You got the hand going? Woohoo!” replies Hubick, who bounds over to take a look.

Soon, he and the students are marvelling at the grip strength of the claw they’ve got hooked to a laptop and talking about adding pressure sensors to it. Moments later, Hubick is helping another student muscle batteries out of a smartphone-controlled car, then coaching two girls with their math homework. Somewhere in all this, he sneaks in a few bites of banana.

“Thank you ladies! Have a wonderful day! Remember: quiz tomorrow!” he says to the math students.

A 27-some year veteran at Sturgeon Composite, Hubick is the school’s head of math and computing science. He and the school’s new Robotics Club are attempting the seemingly impossible: to build an autonomous trash-picking robot in less than a year.

“It’s going to be the size of a table,” he said, based on the students’ preliminary designs, and may feature cameras, LIDAR, six-wheel drive and that big robot claw. It’ll take hundreds of hours to make, which will mean plenty of fun, memorable, hands-on lessons in problem solving for the students.

“There’s nothing theoretical about this,” Hubick said.

Hubick describes himself as a lifelong electronics fan, having grown up rewiring model trains with custom lights and other tricks.

Fellow math teacher Terresa Blonski says Hubick convinced the school to start a computer science program four years ago after he saw student interest in it. His comp-sci classes have been full ever since.

“He eats, reads and breathes computer science problem solving,” she said, which makes him well equipped to help students take on technology projects.

Robots and computers fire the imagination and are an excellent way to teach math and critical thinking, Hubick says. As soon as you get a child to take an Arduino programmable circuit board and use it to make a light turn on, “you can see that spark,” and see how they’re suddenly inspired to see what else they can do with the technology.

Hubick says the trash-bot challenge got its start last year when his comp-sci students asked to build a bigger robot instead of the toy-like ones they usually cobbled together. He suggested they make something to solve the real-life problem of discarded needles on streets, and they jumped at the chance. That led to the creation of the Robotics Club, which is backed by a $5,000 APEGA Innovation in Education Award he got last June.

Hubick says the club’s goal is to build a robot that can navigate a back alley on its own and pick up dangerous trash such as syringes. By working at lunch and after school, they hope to have it operational by June.

“It’s all about solving problems,” Hubick says – you take a big problem like a trash-bot and break it down into smaller ones, like power, navigation, vision and systems integration.

Grade 12 student Tatianna MacKenzie is one of the club’s veterans, having taken computer science since Grade 10 and having built about a dozen smartphone-controlled vehicles last year.

“I just find it really satisfying to create (things like this) from scratch,” she says, and to fix all the problems along the way.

MacKenzie says Hubick has students puzzle out how to build robots on their own (he drops the occasional hint) and doesn’t step in with a complete answer unless you’re truly stumped.

“I feel like it gives us more freedom, and it actually makes us want to figure out what the answer is instead of just going to the teacher for help.”

Having students get hands-on with technology like this gives them the leadership, teamwork skills and practial experience post-secondary institutions say they’ll need in the workplace, Blonski says.

“I’m actually quite shocked they’re as far (along) as they are,” she says of the club members, who are well into troubleshooting designs and making materials lists after about a week.

MacKenzie said she was looking forward to working on the trash-bot project.

“It’s going to be really fun.”