“Everyone that lives has some type of significance."
May 6, 2020 9:00 AM By: Jennifer Henderson, Local Journalism Initiative reporter 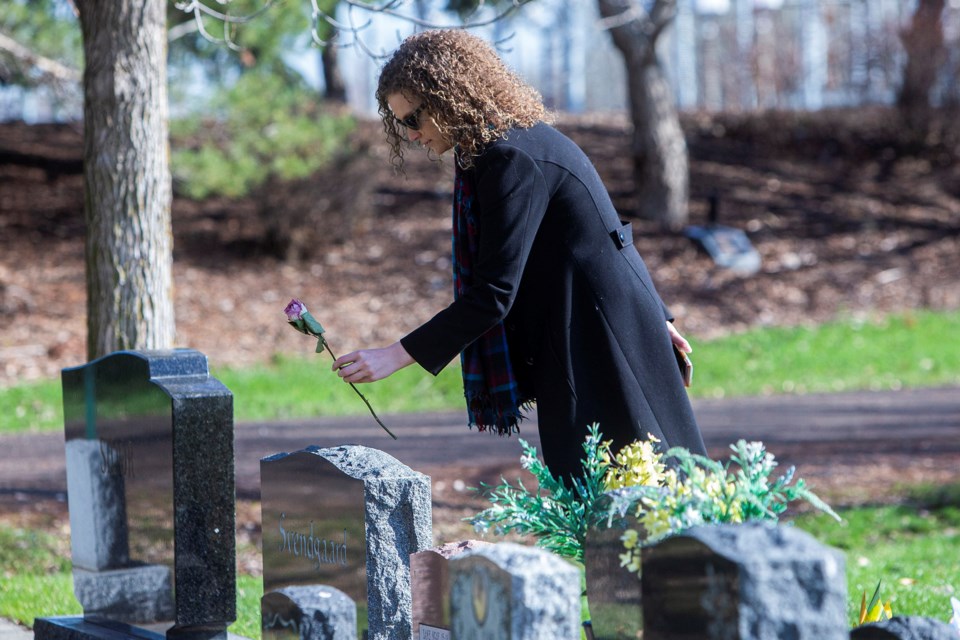 COVID-19 has made it difficult for families to grieve together in the wake of a loved one's death because large gatherings – like at a funeral – are not permitted under the province's emergency health directives. CHRIS COLBOURNE/St. Albert Gazette

Around 80 per cent or more of mourners are opting to delay end-of-life services for their loved ones due to COVID-19 restrictions, says one local funeral home.

Gary Lynn, general manager of Connelly-Mckinley Funeral Homes in St. Albert, said most people who are cremating a loved one are choosing to wait to have a burial and service until restrictions lift.

In March, the provincial government announced funerals had to be capped at 50 people or fewer and in April they dropped the cap further, saying only 15 people could be at attendance at memorial services, which includes funeral service staff.

Lynn said the change has been hard for families who are trying to grieve the loss of a loved one.

“Everyone that lives has some type of significance. And so they in their life reach out to those around them from family and friends. And those family and friends want to have an opportunity to show the family and other family members how much that individual meant to them,” Lynn said.

Lynn said end-of-life services are for people to get together and honour a person’s life and to tell stories, share pictures, listen to music and eat their favourite foods.

“Those are the things people need to do as part of their grief, for the healing. It’s so important for people to be able to participate and be involved in those things so that they can heal.”

Lynn said even some families who are planning casket services are asking the funeral home to hold their loved ones in the hopes that the 15-person limit will lift soon.

For people who are opting to have a service, Lynn said the funeral home started to get really creative to help families mourn.

Lynn said the funeral home is using webcasts to help give access to friends and loved ones who aren’t able to attend in person. The funeral home even hosted a pre-recorded event, where nobody attended at the time, but videos were sent in and put together.

“The casket was open at the beginning, and people can see that and it went into where the family had pre-recorded their messages and tributes, eulogies and the video tribute to them,” Lynn said.

“That was a first for me last week, where we didn't actually have anybody in the funeral home but it was all done ahead of time.”

Another funeral they have organized will have around 50 people attend, but they will all be in their vehicles.

“We have a shortwave radio where we're going to have the minister speak into the microphone. Everyone in their vehicles will tune into the radio station throughout the cemetery and listen to the graveside service.”

Families are also using chat features on the webcasts to talk to each other during the service and show their love and support for those grieving. During other services, the funeral home arranged for 15 loved ones to be together at the church and broadcast the service, and then another 15 people could be together to watch the service in the chapel.

“Even though they're two separate buildings, they're still kind of two groups together at different places,” Lynn said.

Nicole Johnson’s father passed away in February, and although it was before the COVID-19 restrictions were in place, the family opted to have a virtual element to the funeral so many of her dad’s friends who live across the world would be able to share the experience with them without having to travel.

Johnson said the experience was a positive one.

“It was a really good way for people that weren’t able to come to be able to be a part of it,” Johnson said.

The daughter also said it was nice for herself, her mom and her brother to watch the ceremony afterward and soak up some of the moments they weren’t able to really take in while they were so raw with emotion.

Caroline Deutsch, a registered psychologist in St. Albert, said funerals or end-of-life services are a very important ritual in our society.

Deutsch said a service is an opportunity to remember and reflect on the impact a person has made on the lives of those attending the service.

For funerals conducted within the context of faith, the event marks the movement of from this life to the next life. For a secular family, there is an opportunity to consider the impact and influence the person has had on their life.

Deutsch said there is an element of community to a funeral service too.

“It’s an opportunity to bring support and to recognize that grief is such an ongoing process that they're going to have to maybe consider different ways in how to help that person. It really brings it home sometimes because you realize the person has children or grandchildren, or the age or the health of the widow or widower, et cetera,” Deutsch said.

The psychologist said that although funeral services have been shrunk during this time, it may not be all bad news. The new restrictions may allow for intimate services that allow people to show their grief more openly.

“Maybe with public gathering, some cultures need to save face or feel that they want to have a stiff upper lip or to portray a certain way of grief. This may actually give more freedom,” Deutsch said.

Another silver lining, Deutsch said, is that people may need to put pen to paper or write an email and explain how they feel.

“That may call for more reflection and a more personal means of communication or personal communications between people who were there and not there,” Deutsch said.

Even having a service later on might be nice for families, as they may be in a better position to really take in the moment because the shock of the traumatic experience will be gone and they may feel more stable.

Deutsch said grieving is typically at a minimum a two-year process and many people don’t realize that. Many may assume the family is doing well a few months after the funeral, but in reality, the family may be suffering and wanting to talk about their loved one.

Delaying a funeral could be a positive thing for some families, as they will get an opportunity to talk about their loved one after the death.

“It's possible that it could be very therapeutic in the long term,” Deutsch said.

Johnson said now that her father has passed away, one of the biggest challenges has been supporting her mother, who is living alone for the first time in 74 years, all while being isolated due to COVID-19.

“It's heartbreaking,” Johnson said, adding her mom is in a high-risk category if she contracts COVID-19.

“It’s been hard. I want to go over there and just hang out with her, give her a hug and do those things that families need to do,” Johnson said.

“We just don't want to be the contributing factor to losing our other parent.”