Four weeks ago, the east end of Big Lake was a smouldering ruin. Now, it’s a verdant sea of grass and life, and possibly the best looking part of the shoreline.
May 14, 2016 12:00 AM By: Kevin Ma 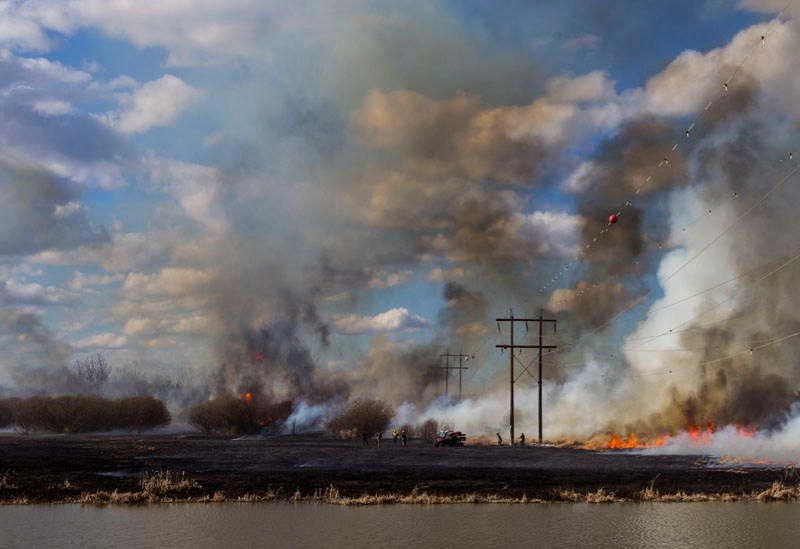 SCORCHED â€“ A view of the Big Lake shore during the April 14 fire.

Four weeks ago, the east end of Big Lake was a smouldering ruin.

Now, it’s a verdant sea of grass and life, and possibly the best looking part of the shoreline.

Alberta’s forests and grasslands bounce back fast from fire, and can sometimes come out of them better for it, say experts.

Alberta’s grasslands and boreal forest burn on a regular basis and have evolved to deal with fires, explained Peter Murphy, a retired forestry professor in St. Albert.

“In natural ecosystems, fires are a means to start over again,” he continued.

Forests and fields tie up a lot of nutrients in trees and leaf litter. Fire releases them back into the soil as ash and also eliminates parasites such as mistletoe. Prevent too many fires, as Alberta has learned, and that litter builds up and creates super-intense fires that carry nutrients away, leaving the land impoverished.

Big Lake was able to bounce back fast because many of the roots and tubers of its plants were left intact, Murphy said. With the surface now clear of competition, those plants had the place to themselves and quickly regenerated.

One of the first plants to come back after a fire is fireweed, known for its tall shafts of magenta flowers, Murphy said. These plants love light and hate shade, so they’re soon crowded out by other, bigger plants in a process called succession.

Aspen poplar trees have extensive root networks that allow for rapid recovery after a fire, Murphy said. Those roots are covered with heat-sensitive nodules that become shoots when exposed to heat – say, from a fire or a cleared part of the forest.

The fires up north might have killed the aspen, but the roots of those trees are likely still okay, Murphy said.

“There will be a massive sprouting of aspen poplar shoots that will probably be visible by this summer.”

Insects are amongst the first creatures to move back into an area after a fire. Most bugs in the burnt part of Big Lake would have either sheltered in ground-squirrel holes or run away, allowing it to be swiftly repopulated, said Peter Heule, entomologist at the Royal Alberta Museum.

Certain pyrophilic bugs such as the white-spotted sawyer (or tarsands) beetle are specifically drawn to fires, Heule said. The black fire beetle has infrared sensors on its belly so it can detect such blazes, while the sawyer beetle sniffs out its scent.

Instead of drilling into live trees to lay eggs and risking death by sap, these bugs seek out fresh-killed, still nutritious, and now defenceless trees that have been cooked by fire, Heule said. You’ll also see a lot of ground beetles in the first few years after a fire that go after the burnt remains of plants.

Certain animals are also drawn to areas after a fire, Heule noted. The black-backed woodpecker loves burnt trees, for example (due to the camouflage), and roots around in them for bug larvae.

Fire can help species such as the jack pine to spread. These tall trees store up to 30 years of cones in their canopies and rely on fire to open their cones, Murphy continued. Once opened, the seeds within sprinkle as if from a pepper mill, producing seedlings everywhere. Fort McMurray can expect decent sized jack pine seedlings within five years and a mature forest in about 50.

Others are simply wiped out by forest fires. White spruce have no quick way of regenerating after a fire, as they don’t re-grow from their roots and don’t need fire to open their cones. If a fire were to rip through the Grey Nuns White Spruce Park, the white spruce in it would be gone for good unless some seeds blew in from another stand, replaced instead by shrubs and herbs.

People see wildfires as a threat to buildings and natural resources, but they’re a way of life in the boreal, Murphy said.

“The fate of the boreal plant community is that at some time, (it will) burn.”