A new social media challenge in the city is encouraging people to focus on their health in January. The St. Albert and Sturgeon Primary Care Network launched the metro-regional challenge, which kicks off Jan.
Jan 4, 2019 2:12 PM By: Dayla Lahring 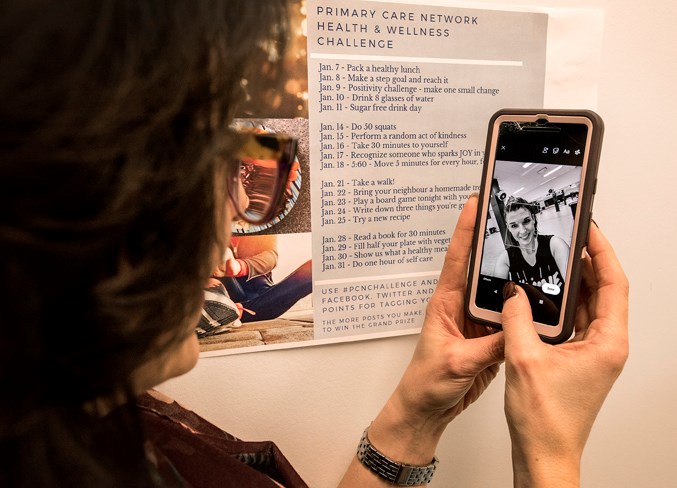 Natasha Hilchie, health facilitator at Primary Care Network, uploads a photo of herself working out to Instagram January 3, 2019. The Primary Care Network is doing a social media challenge where for the month of January people upload a self-made goal on social media using the hashtag #PCNCHALLENGE. The person with the most uploads will win a prize of cookbooks, gift cards and workout equipment. One post equals one entry.

A new social media challenge in the city is encouraging people to focus on their health in January.

The St. Albert and Sturgeon Primary Care Network launched the metro-regional challenge, which kicks off Jan. 7, among primary care networks in the Edmonton zone.

“We wanted to beat those winter blues – sometimes January is a tough month for people,” said challenge creator Shanlyn Cunningham, who is also the communications coordinator for the local network.

Through the challenge, Cunningham hopes participants will learn how to create small, obtainable goals that will increase their overall well-being.

Getting people to post through the week also creates a sense of accountability.

“Sometimes when you participate in these challenges, you see other people participating and it helps you stay motivated,” she explained.

The local network has created a calendar of posting dates, along with suggestions for those who don’t know what to do.

Cunningham said medical professionals working at the Edmonton zone networks generated the ideas. Together, they chose challenges that would be easier to do, such as completing one hour of self-care or perform a random act of kindness.

Some of the more active challenges include going for a walk or completing 50 squats in one day.

Natasha Hilchie, health facilitator at the St. Albert and Sturgeon Primary Care Network, said the suggestions are meant to help people reach realistic goals. Doing 50 squats, for example, can be broken down into 10 squats five times a day or five squats 10 times a day.

Goals that would drastically alter participants' lifestyles overnight tend to fail the most, she noted. This is most often seen when people make popular New Year’s resolutions.

“If somebody sets a goal for 10,000 steps (a day), that can be a little bit unattainable for somebody if they’re not currently meeting anywhere near that,” Hilchie explained.

As someone successfully reaches smaller goals, Hilchie said that builds confidence and moves that person toward living a healthier lifestyle in the long run.

But participants don’t have to stick to the list provided by the network. They’re free to create their own goals for the challenge, as long as they use the hashtag when posting.

If anyone needs guidance on some of their daily goals, Hilchie said they should reach out to the network for help.

While Cunningham didn’t say specifically what the grand prize would be, some of the items include cookbooks, gift cards and exercise equipment. The prizes were gathered by the participating primary care networks across the Edmonton zone.

If the challenge goes well, Cunningham said she will likely do another one in the future. She said she's still deciding whether it would be an annual social media event or if it will happen throughout the year with a focus on specific topics like eating and exercising.

For more information about the challenge, visit the St. Albert and Sturgeon Primary Care Network website at: http://www.saspcn.com/.