No discounted dog licences for seniors 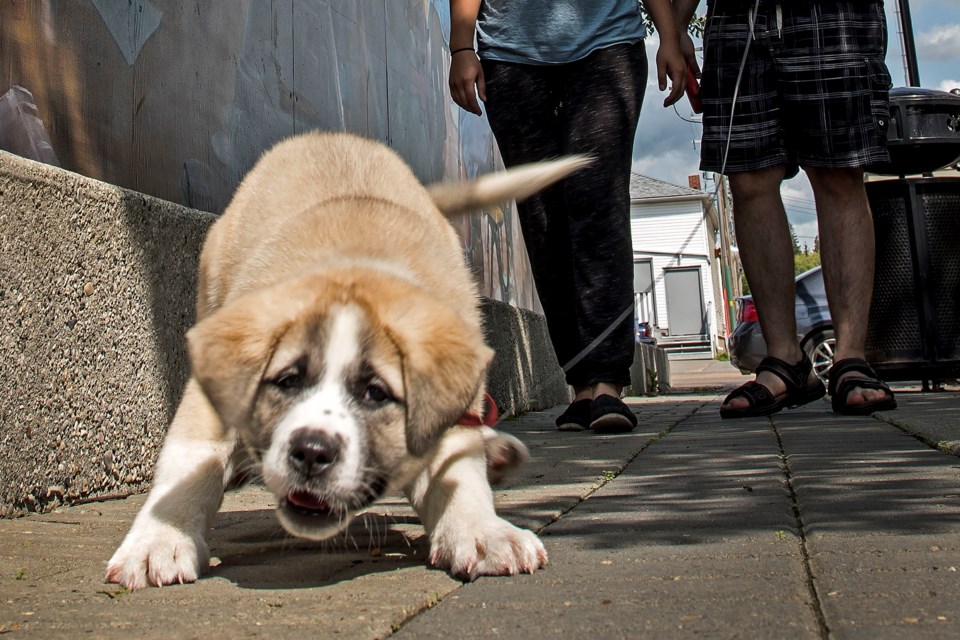 Kallie, a Husky-mix puppy, goes for a walk with his people along Perron Street in St. Albert. DAN RIEDLHUBER/St. Albert Gazette

St. Albert seniors will not be getting a discount on dog licences this year after council voted down changes to the animal bylaw.

During the Sept. 8 council meeting, council voted 4-3 against moving the one-year pilot forward, which would allow for residents over the age of 65 to get a 50-per-cent discount on dog licences for spayed or neutered dogs.

In February, council passed a motion by Coun. Ray Watkins in support of the pilot after the idea was born out of discussion at the St. Albert seniors advisory committee. This latest recommendation would have added in a fee table to the city's animal bylaw to set up the discounts.

City administration estimated a $32,300 loss in revenue from the pilot that could possibly be made up using the stabilization reserve.

"As we know, one of the major issues that seniors combat (is) loneliness, and pets really help with that. We're looking for just a one-year pilot program to see what the actual costs are," Watkins said, noting the estimated $32,300 cost is based on the assumption that every eligible senior resident would participate.

However, this time around, the support of council was outweighed by concerns over making cautious spending decisions amid the COVID-19 pandemic.

Unexpected costs and revenue loss from the pandemic resulted in a $14.4-million shortfall before cost-saving measures whittled down that amount to $500,000, though there are still future unknowns that could deepen the city's deficit by year's end.

Coun. Natalie Joly said it would not be appropriate for council to absorb the potential $32,300 loss to move the pilot forward "without any indication this will help low-income seniors."

Most seniors Joly said she spoke with were fine with paying the $38 dog licence fee if it meant the city wouldn't have to raise taxes or cut funding to other programs. That money could instead go to programs designed to help seniors in need, like Stop Abuse in Families (SAIF)'s elder abuse program, she said.

Joly said one resident asked if it would make more sense to associate discounted fees to income levels and not age categories instead, as not all seniors in St. Albert are low-income.

Mayor Cathy Heron said she agreed with Joly's points. She said she is supportive of financial breaks for those in need, but basing discounts on age or gender may not be the best assessment. The province is also pressuring municipalities to be prudent with spending and avoid tax increases amid COVID.

"I get that it's a one-year pilot, but listening to the provincial government's screaming at municipalities to not raise taxes ... it's more of a principle thing for me," Heron said.

Watkins noted in closing that the pilot had unanimous support from the city's seniors comittee, and the benefits of the program would outweigh the cost to the city.

Jeff Saunders, chair of the St. Albert seniors committee, said he was a little disappointed to hear of council's decision but not surprised.

"I think we on the committee understood that it was potentially a little controversial, and maybe even more so right now given how cost conscious councils across the province are right now," Saunders said. "I don't think this is a significant surprise."

There is a perception in St. Albert that seniors are not living in poverty, he said, when some are struggling to keep a roof over their heads and battling loneliness. According to Statistics Canada 2016 census, 13 per cent of St. Albert residents over the age of 65 are low-income.

"When it comes to pets for companionship, we're just trying to find a way to ensure that cost wasn't a barrier to pet ownership," he said.

Putting in qualifications for the discount could discourage seniors from applying because of the work involved, and the committee felt they wanted to make access as easy as possible, he said. But he said he can understand council's position on the pilot amid the pandemic.

"I think council was trying to hold the line and not set a precedent for reducing (revenues). A sense of fairness was probably weighing on their minds as well."