A nonprofit group pursuing funding from St. Albert for an inclusive sport and wellness campus is thinking big as it plans to double the facility's size.
Mar 16, 2018 10:10 AM By: April Hudson 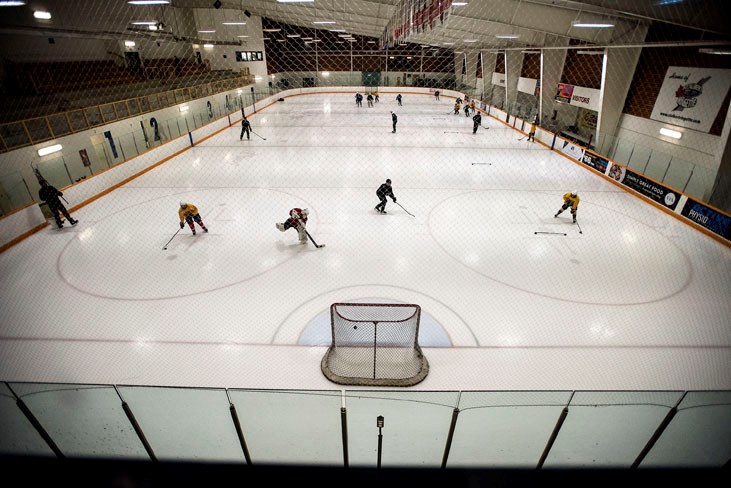 Players on the ice at Mark Messier Arena at Servus Place in St. Albert. A shortage of ice time in the city means many players have to go out of town. Active Communities Alberta is trying to get funds to build a new facility that would offer more local ice time.

A nonprofit group pursuing funding from St. Albert for an inclusive sport and wellness campus is thinking big as it plans to double the facility's size.

Active Communities Alberta, a nonprofit society, is now looking at a facility with four ice sheets, two gymnasiums, meeting space that would be offered to community groups free of charge, and daycare.

The vision is twice the size the society had originally planned for. Despite the larger facility, the society still plans to absorb all the operating costs.

Society president Matt Bachewich said the change came from feedback the group received during a town hall meeting in October. The board of directors decided in January to expand its vision.

"We think it would be more likely to garner provincial and federal funding, because this facility would be positioned as a regional recreation and community facility that meets the needs of multiple municipalities and is a shining example of regional collaboration," Bachewich said.

Bachewich first pitched the idea of a multi-sport complex to city council last June. At October's town hall meeting, Active Communities Alberta laid out a plan for the facility costing between $35 and $40 million.

Bachewich estimates the updated concept would cost $60 to $65 million to build, but by doubling in size, the facility would be in a position to serve the needs of other communities as well – in particular, Edmonton.

He said the society has met with several Edmonton city councillors and staff who have been supportive of the concept.

"Both cities would benefit from that."

The need for more ice in St. Albert was a common theme across ice-related sports. Gill Hermanns, then-president of the St. Albert Minor Hockey Association, said the association spends hundreds of thousands of dollars each year on ice rentals outside the city.

Active Communities Alberta is maintaining its ask of roughly $20 million from St. Albert – money the city had already earmarked for a future ice sheet – and will also be looking for $20 million in funding from Edmonton. $10 million would come from the province and $10 million from the federal government.

Active Communities Alberta will be applying for funds from the federal government's Investing in Canada program, which has $140 million available for community, culture and recreation projects in Alberta.

"In order for those funds to be accessed, the province has to put up a matching portion," he said.

In November, St. Albert's city council agreed to have Mayor Cathy Heron write a letter of support for Active Communities Alberta to help the society apply for provincial and federal funding.

Bachewich said the next step for the society is to come to council again and ask to enter into a memorandum of understanding in order to establish a more formal relationship. He expects that will happen within the next month.

The site Active Communities Alberta is most interested for its facility is bordered by Sir Winston Churchill Avenue, 137th Avenue and Anthony Henday Drive.

It's the same parcel of land St. Albert city council has already offered to annex so that the St. Albert Soccer Association can build its own indoor soccer facility.

Bachewich said Active Communities Alberta has met with the soccer association several times in the past year and there would be room on that land for both projects to move forward.

"We feel the facility we're planning and that indoor soccer facility would be very synergistic and compliment each other very well on that site," he said.

"We look forward to opportunities to collaborate with (the soccer association) on making full use of this site."

The site in question is about 35 acres in size. Active Communities Alberta is looking for 12 acres of that, which would include any parking required for its facility.