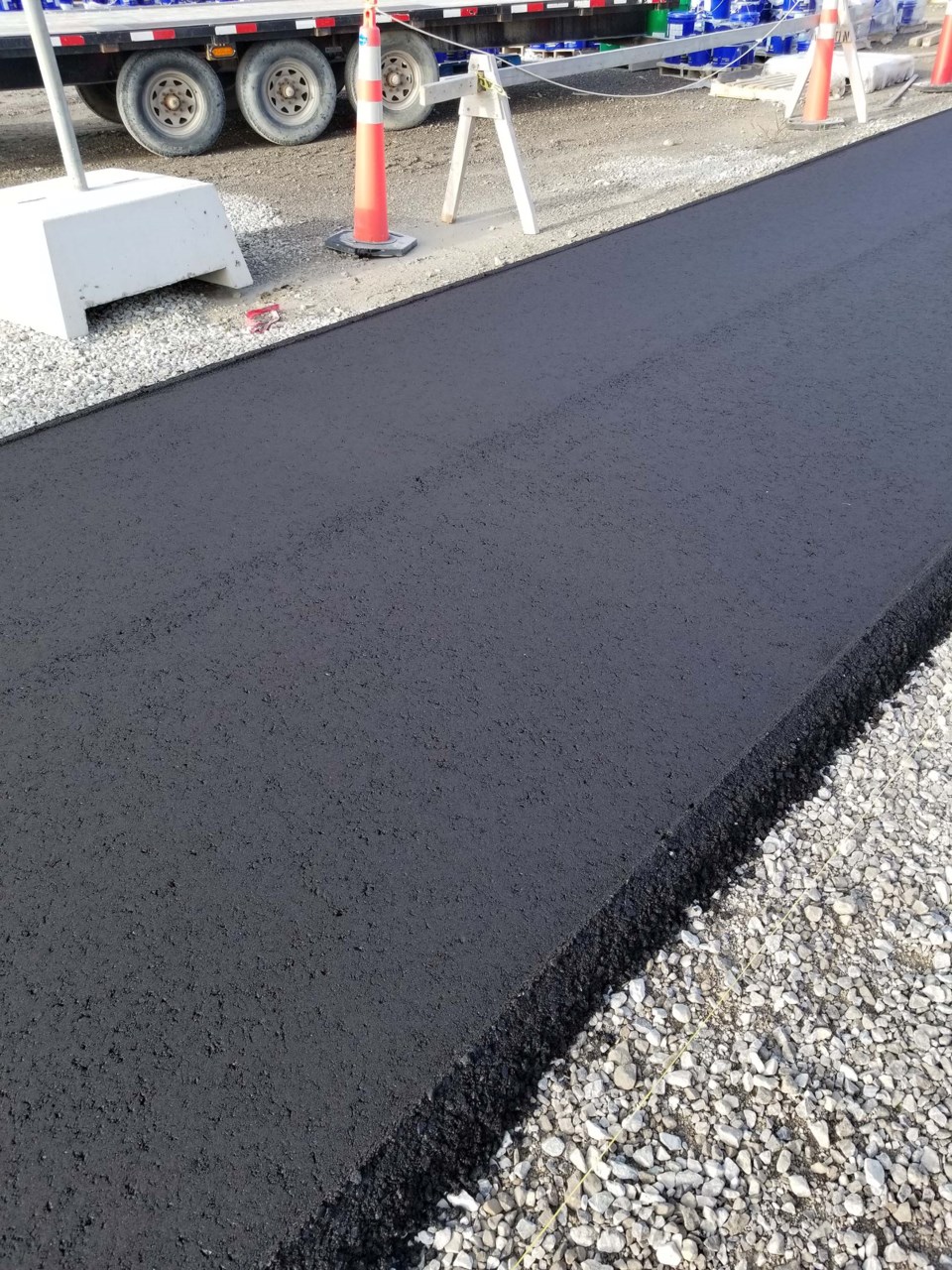 PLASTIC ROAD – A strip of asphalt made with recycled plastics that was deployed in Sarnia, Ont., earlier this year. Sturgeon County has partnered with NAIT to test this type of asphalt on local roads next spring to see if it could reduce costs and plastic waste. GREENMANTRA TECHNOLOGIES/Photo

Sturgeon County residents will be driving on streets paved with recycled plastic next spring as part of a partnership with NAIT.

Inter Pipeline unveiled the details of the Plastics Research in Action initiative in an online press conference Nov. 19. The initiative is a 10-year, $10-million partnership between Inter Pipeline and the Northern Alberta Institute of Technology to reduce plastic waste.

Sturgeon County council moved in October to chip in $30,000 of in-kind support toward one part of that initiative: the Asphalt Paving Applied Research Project. At the time, few details about that project were available.

About 87 per cent of all plastic consumed in Canada ends up in landfills or the environment, Environment and Climate Change Canada reports – that’s about 570 garbage-bags-worth of trashed plastic every minute, federal Environment Minister Jonathan Wilkinson has estimated.

“Plastic is a valuable commodity that belongs in the economy, not the environment,” said Inter Pipeline stakeholder relations director Lorraine Royer.

Royer said this initiative is meant to find new ways to use and prevent plastic waste and contribute to a more circular economy.

The (plastic) road ahead

In addition to studying microplastics in the North Saskatchewan River under this initiative, NAIT is also working with Ontario’s GreenMantra Technologies and Sturgeon and Strathcona County to see if recycled plastic could be used to create asphalt.

Our current rate of plastic waste production is not sustainable, said Adetoyese Oyedun, the NAIT researcher heading up the asphalt project. While we have the technology to recycle that waste, we struggle to find a use for it.

Nations such as India have already had some success with using waste plastics in their asphalt, but they for the most part have simply been grinding up the plastic and tossing it in the mix, Oyedun explained. Those mixes tend to crack and leach microplastic pollution, and it is unclear if they would withstand Alberta’s winters.

Plastics in consumer goods are designed to be non-reactive, explained GreenMantra spokesperson Carla Toth. Melt them and add them to asphalt, and they separate from the sticky bitumen like oil in water.

Toth said her company uses heat and catalysts to chop up the chemical bonds in single-use plastic items such as shopping bags and shampoo bottles to create a grey-black synthetic wax pellet that is more likely to bond with bitumen when melted. (The pellets are black since that’s what you get when you mix a whole bunch of different-coloured plastics together, she explained.)

Toth said her company has done test-runs of its plastic asphalt in Vancouver, B.C., and Sarnia, Ont., with the Sarnia test involving the equivalent of about 113,000 recycled plastic bags worth of waste. These Alberta sites would be the coldest conditions under which their plastic asphalt had been tested yet.

Oyedun said his team would evaluate four plastic mixes in the next few months before deploying one or two for field tests in Sturgeon and Strathcona. The team would compare the mixes to regular asphalt roads over two years and do a cost-benefit analysis to see if any of them perform as well or better than a standard road mix.

Sturgeon County utilities manager Jeff Yanew said the county hopes to deploy the test mixes on an industrial and a lower-traffic road this spring. Each test strip would be about a kilometre long and would likely be applied to a previously gravel road. If the mixes work, the county could use them to save money on road repairs.

“Roseridge is a landfill in our backyard,” he added, and diverting plastic waste from it into roads could extend its lifespan.

See www.nait.ca/pria for details on the plastic waste in asphalt project.