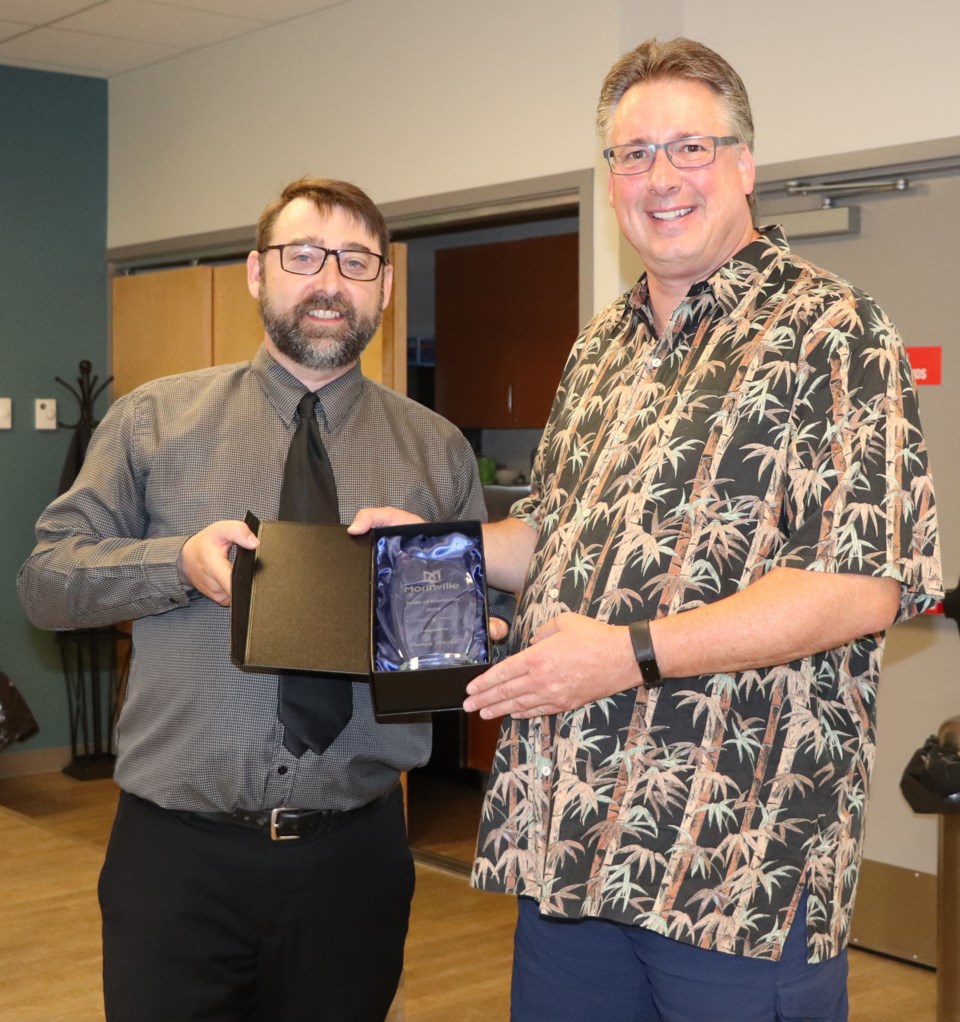 COMMUNITY CHAMP – Morinville Mayor Barry Turner, left, presents Danny Getzlaf with a Pride of Morinville award July 9. Getzlaf was one of three residents recognized for their contributions to the community, and was honoured for his work as an advocate for ALS research.

A builder, a hockey coach, and an ALS crusader were singled out for recognition last week as Morinville council presented its Pride of Morinville Awards.

Brad Reiter, Wayne Gatza, and Danny Getzlaf recieved the awards on July 9. Council gives out the awards quarterly to recognize town residents who make significant contributions to the community.

Getzlaf was recognized for his efforts to raise awareness of amyotrophic lateral sclerosis (ALS), a motor neuron disease with no known cure that results in gradual paralysis and death in two to five years. He was this year’s ambassador for the 2019 Edmonton Walk to End ALS and its top fundraiser, rallying some $30,285.80 for the cause.

Mayor Barry Turner, who called Getzlaf a close family friend, praised Getzlaf’s remarkable efforts to promote ALS research and care for others, and said he had put Morinville on the map as a compassionate community.

“I truly wish you didn’t have to fight this battle with ALS,” he said.

Getzlaf said in an interview that his case of ALS has advanced slower than most, so he decided to use his mobility to speak out about it to help those who cannot.

He praised Morinville residents for rallying some $14,000 in 10 minutes for ALS research at March’s Morinville Fish and Game Association Brag Night, as well as another $2,000 at June’s fundraiser at Coach’s Corner, which saw Turner and other local celebrities volunteer to get dropped in a dunk tank. He planned to continue his fundraising efforts on Oct. 5 at the Morinville Oktoberfest.

Getzlaf, who said he was shocked to get this award, said he hoped his efforts would lead to a cure for those with ALS after he passed on.

Reiter was recognized for his work as site supervisor for Clark Builders at the Morinville Leisure Centre.

“You put blood, sweat, and probably tears into this project and into your community,” Turner told him.

“The Morinville Leisure Centre is a facility we can be truly proud of and will be a tremendous hub of activity in Morinville for decades to come.”

Reiter said in an interview that he was honoured by this recognition, adding that he was part of a great team that included about 20 other town residents. Ironically, despite being the first person to get a membership at the centre, he’s only had time to visit it once since it opened.

“It will be pretty awesome watching my kids play hockey and other sports in there,” he said of the leisure centre.

Gatza, who could not be reached for an interview, was recognized for his role as coach of the Morinville Kings, who won the provincial NCHL Championship earlier this year.

Residents can nominate people for the Pride of Morinville by calling 780-939-7853.

A new report suggests that Morinville’s mayor is earning 64 per cent less than his peers across Alberta in terms of salary.

Town council received a report from consultant Ed Grose last week but kicked the debate on its pay policy associated with it down the road to August so Coun. Nicole Boutestein could be present for it.

Council had commissioned the report as part of its mid-term compensation review.

However, Grose noted that some of these communities had full-time mayors rather than part-time like Morinville. Nine had also raised their salaries to compensate for the end of a federal tax credit in January for elected officials – Morinville had not.

Council will consider changes to its pay policy this Aug. 27.