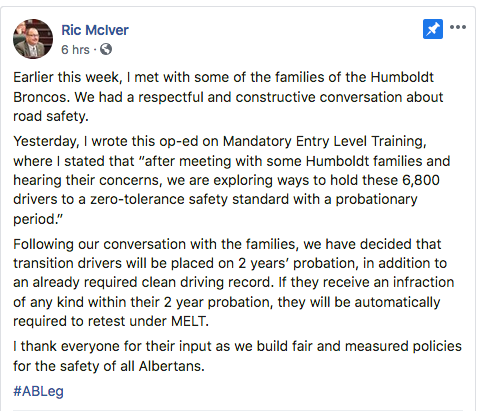 Local families of Humboldt Broncos players were left wanting more after meeting with the provincial government on driver training regulations.

On Wednesday, Shauna Nordstrom, her husband and two daughters went to the Alberta Legislature to push for changes. Nordstrom's family lost their beloved Logan Hunter in the Broncos bus crash in April 2018.

Chris and Andrea Joseph, who lost their son Jaxon Joseph in the crash, also attended the Legislature.

The families gathered for a press conference, watched an emergency debate on driver training regulations and then met with Transportation Minister Ric McIver.

“The meeting, we came away wanting more, but we felt we were heard.”

The families came together after McIver released a statement earlier this month that UCP government had extended the deadline for drivers to comply with the new Mandatory Entry Level Training (MELT) program for Class 1 and Class 2 licences, which was introduced by the former NDP government. The government was also looking at grandfathering in newly licenced drivers.

Joseph said McIver assured the families MELT is coming in for all drivers but the government needs to address a backlog of people waiting for their driving exam.

“We were assured all along that it's not going away. It's coming in. They just needed to fix the backlog, and they're trying to get some people through. So this step that they took today is just that, it’s a step. We think there is still a long way to go in a lot of areas, not just MELT.”

Nordstrom said she was grateful to meet with McIver and it was great to hear he wanted to work with the Broncos families, but she left with more questions than answers.

“I feel still pretty frustrated, I have to say. We may have made a little bit of headway, but driving to work today, I realized there is just so much more to do,” Nordstrom said.

“It’s going to be a battle and I still really don’t think it should be.”

Nordstrom also noted the government said the exemptions will be until March 2021 but added that date wasn’t official and is concerned that drivers may be exempt from MELT forever.

The new training program was brought in by the NDP last year as an effort to strengthen driving regulations following the Humboldt Broncos bus crash. Joseph said the MELT program that was brought in to Saskatchewan, Manitoba and Alberta was a great first step in keeping up with regulations in Ontario.

The UCP government said it was relaxing the rules for bus drivers and farmers because they are travelling much shorter distances than long-haul truckers.

After the meeting with the Broncos families, McIver said the government will alter regulations for the 6,800 new drivers who are not MELT qualified.

“Transition drivers will be placed on (two) years probation, in addition to already required clean driving record. If they receive an infraction of any kind within their probation, they'll be required to retest under MELT,” McIver said.

The change is small, but for the families it is a step forward.

“We are going to work with Ric McIver to ask for transparency and clarity, because we are still not clear and they haven’t been transparent,” Nordstrom said, adding she would like to see the barriers the government is facing and documentation to show where the backlogs are.

“There were no details. Nobody could give us pinpoints. It was just vagueness, and we want pinpoints.”