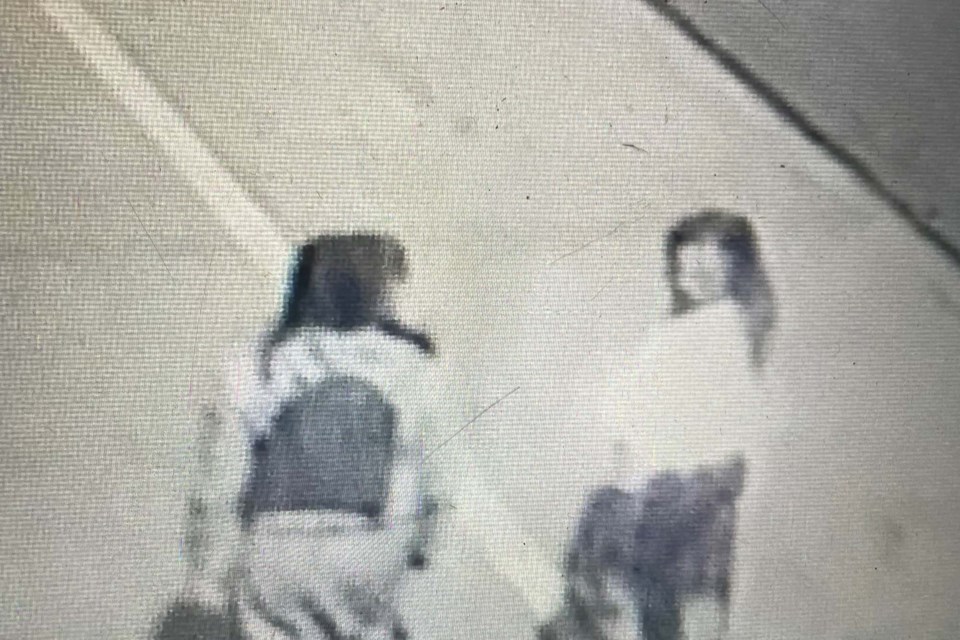 St. Albert RCMP are looking for the two females shown in this surveillance video. SUPPLIED/Photo

RCMP are looking for a pair of females in their investigation of a fire at Neil M. Ross Catholic School early Sunday morning.

St. Albert fire services received a call about a fire outside of the school Sunday morning at about 12:38 a.m. After arriving at the scene, they found flames and smoke at the main entrance, but quickly extinguished the fire.

No one was hurt in the incident, and the fire did not spread into the building, City of St. Albert spokesperson Florence Ma said in an email.

The RCMP were brought in at 1:24 a.m. Sunday to investigate the fire.

RCMP are now looking for two females who were seen on video surveillance arriving at the school at about 12:06 a.m. and leaving the area at around 12:16 a.m., heading south on Woodlands Road.

“At the moment we would like to talk to them as they were seen in the area around the time when the fire started,” said St. Albert RCMP Const. MJ Burroughs.

Iva Paulik, the secretary-treasurer for Greater St. Albert Catholic Schools, said in a statement provided to The Gazette that the fire was an “unfortunate incident” for the Neil M. Ross School community.

“We are very thankful for the quick actions of the local area residents who reported the fire and the response from the St. Albert fire department who put the fire out quickly to minimize damages to the school,” Paulik said.

In the statement, Paulik said the assessment of the damages is underway, and that the school division will be working with authorities to determine the cause of the fire.

“Repairs to the building will get underway as soon as possible to ensure the school is ready to welcome families back for the upcoming school year,” Paulik said.

RCMP are asking anyone who recognizes the two females to contact the St. Albert detachment at 780-458-7700.