Reconciliation from the heart 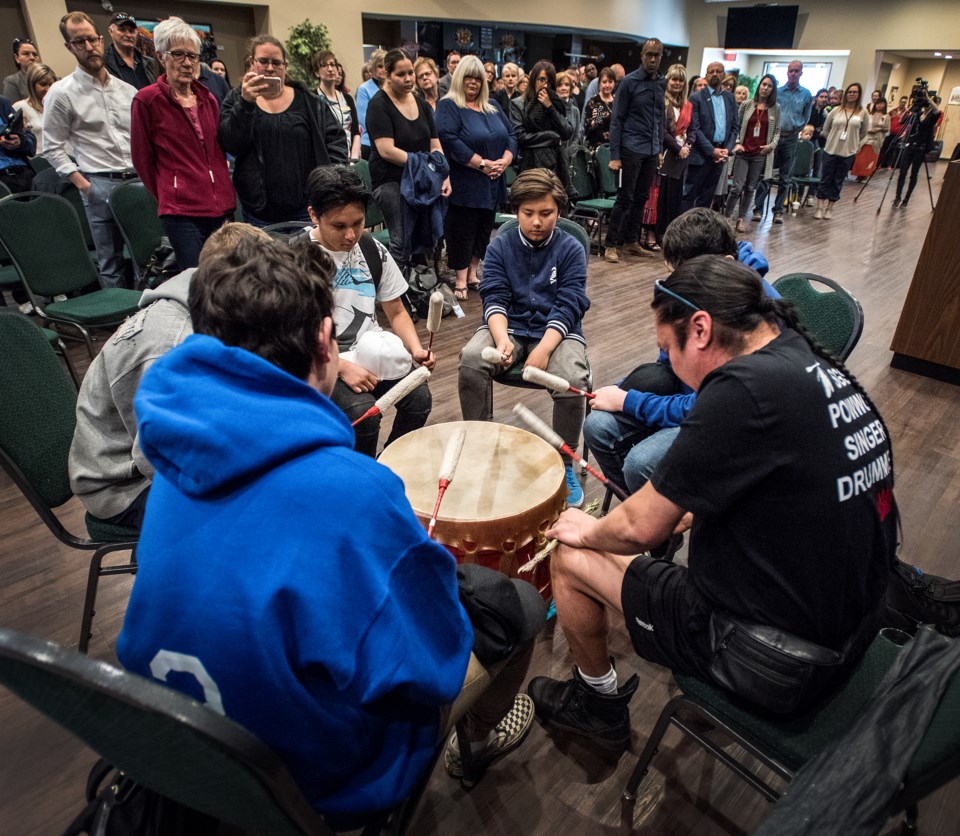 The One Nation Singers perform during the City of St. Albert's launch of the Payhonin Reconciliation series with formal blessing, speeches and traditional Metis Jigging at the St. Albert Curling Club April 17, 2019. DAN RIEDLHUBER/St. Albert Gazette

Reconciliation is a long journey that starts with the mind and continues toward deep understanding from the heart, and St. Albert’s efforts at reconciliation are a “start.”

This is according to a local knowledge keeper who consulted on St. Albert’s Payhonin reconciliation engagement report, presented to city council in early September.

Hazel McKennitt said the recommendations are quite comprehensive, but reconciliation has to come from a place of deep knowledge of all that has happened to Indigenous peoples.

“What people have to understand with reconciliation, it’s ongoing. It’s not going to end. Residential school effects are not going to end for a very long time,” she said. “For that little bit of money that St. Albert has to spend, they have to think about what we lost as residential school survivors and people on reserves. Every survivor has seven generations behind that has to be taken care of.”

While council accepted and implemented some recommendations from the Payhonin report last month, administration will be bringing a prioritization plan for council’s review in November.

One of the recommendations McKennitt highlighted as important for St. Albert to go ahead with is hiring a full-time staff member dedicated to reconciliation efforts, who she envisions would add an Indigenous component to “every part of whatever St. Albert is doing.” That could include everything from training staff to naming places in the city.

McKennitt said the Payhonin engagement report was quite thorough and “covers it,” but she is waiting to see the prioritization plan administration draws up.

“You cannot change a person’s mind by just telling them, 'You have to change your mind.' That has to come from the longest trip, from the head to the heart. That’s your longest road,” she said. “When that happens, that is when reconciliation will start.”

Sharon Morin, Michif Cultural and Resource Institute program director, said it is important that reconciliation efforts come from the heart, and are not about lip service or blank cheques.

She added reconciliation is a human story, about people like Morin’s grandparents, who suffered years of residential schooling.

Morin said one part of the Payhonin report that really stuck out to her was the idea of consultation.

For example, she talked about how local Indigenous people used to go out to the riverlots to pick sage. Sage is a sacred plant to Indigenous people and can be used for medicinal purposes and in smudging ceremonies.

Last year, Morin went out to the riverlots and instead of sage found the ground had been torn up for the new Riverside development. She added no one is trying to stop development, but had Indigenous folks known the sage would be torn up they could have moved some of the plants to another site.

Another idea in the report she highlighted was arranging “nation to nation” meetings, which she said should be no different than neighbours meeting neighbours, similar to the Edmonton Metropolitan Region Board.

Morin said she is not sure the city could take on much more than the Payhonin report recommends, and there is still a lot of misunderstanding about the city’s role in reconciliation.