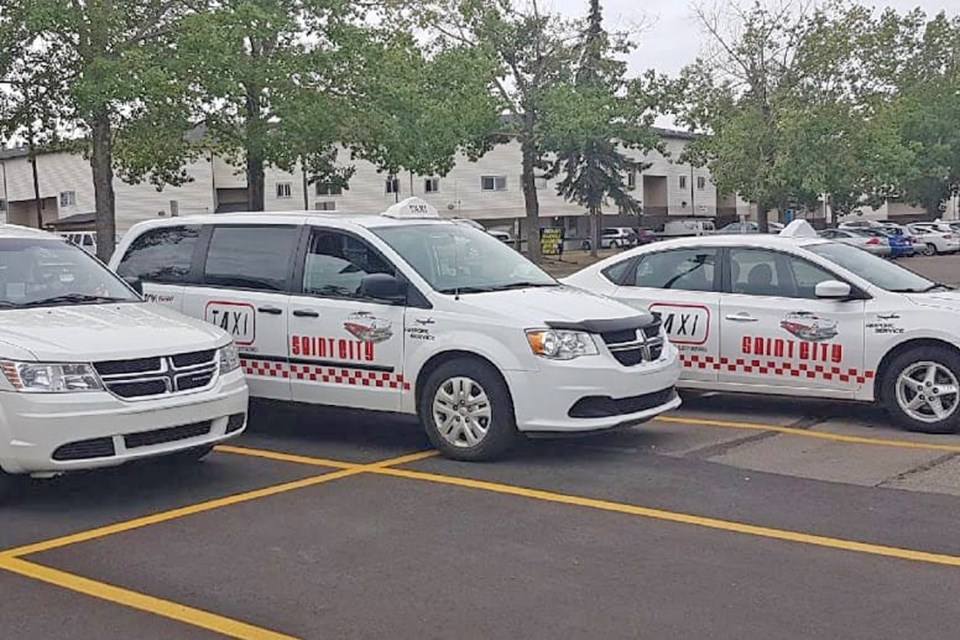 St. Albert taxi company Saint City Taxi is no longer operating as of Feb. 23, but will honour appointments made until the end of the week. SAINT CITY TAXI/Facebook photo

St. Albert taxi cab company Saint City Taxi is no longer operating as of Feb. 23 after the owner decided to shut down the business, citing increasing maintenance and licensing costs, along with competition with other ride-sharing apps like Uber.

Now when people call the Saint City Taxi phone line, they’ll be directed to a voicemail message stating the company will no longer be offering taxi service, but will keep all appointments made until the end of the week, Feb. 28. Their delivery service component will now operate as an independent company.

A former taxi driver with Saint City Taxi said he received a text message early Sunday morning notifying him of the immediate closure.

“Yesterday was my last day,” said the former owner-operator, who had worked for the company for the past 10 years. He asked to remain anonymous because of employment concerns.

“I was shocked (the owner) was shutting down the taxi side of things. In the text message, he blamed it on high maintenance costs, high insurance costs, and the onset of Uber taking all the business away from cab drivers.

“(The owner) decided he had enough, and he’s of retirement age, so I guess he decided he didn’t need the stress anymore and shut it down.”

The St. Albert Gazette was not able to reach the owner of Saint City Taxi for comment.

Saint City Taxi has been operating in St. Albert for approximately 14 years, and employed between 15 and 20 drivers and six dispatchers.

In comparison, Saint City could only service people in the St. Albert area because the City of Edmonton bylaw prevents taxi companies not licensed by the city to pick up fares in Edmonton. So they can take people into Edmonton, but if someone needed a ride back to St. Albert, they’d have to look elsewhere.

Since the City of St. Albert passed a vehicle-for-hire bylaw allowing Uber to come into the city in 2017, it’s been difficult for cab drivers to keep up, he said.

The loss of Saint City Taxi has drawn mixed reviews so far.

St. Albert resident Jordan Lamb said since Uber has come to the Edmonton area, he tries to avoid using taxis when he's not driving somewhere himself.

"I have found that drivers with Uber are much more professional and polite, and the vehicles are in way better shape," he wrote in an email.

Facebook user Claire Rivard Cunningham wrote she was sad to see Saint City Taxi go, as she could "always count on them to be on time and treat people with respect," while Edmonton resident Curtis Van Ruskenveld wrote he usually uses Uber, but recently went with the taxi company instead and found their service to be satisfactory.

"This business is not easy"

Puneet Gupta, owner of Apple Cabs, said he could understand the news given the pressures facing the industry. Apple Cabs began offering services in St. Albert nine months ago, and currently employs around five drivers.

“Insurance is very high, there’s no doubt. Then with Uber, there isn’t too much taxi business left,” Gupta said.

Between insurance, vehicle maintenance and the emergence of ride-sharing apps, he said it’s difficult for the taxi service to make a profit.

“We want to make money and survive. I have four or five families depending on me right now,” he said.

Manpreet Singh, owner of Flat Rate Taxi, said he was “shocked” to hear Saint City Taxi had closed down so quickly. Flat Rate Taxi has been in St. Albert since May 2018, and currently employs 10 drivers.

As the company’s sole dispatcher, Singh said he works from 4 a.m. until 6 p.m. every day. Instead of having a storefront, Flat Rate Taxi operates as a home-based business to try and cut costs "so we can survive," he said.

“It’s very hard actually – this business is not easy."

Singh said Flat Rate Taxi saw an increase in business the morning after Saint City Taxi shut down. With plans to expand by five or six cars next month, he said they should be able to handle overflow demand.

“In the future we have to do something. We’re planning to add an app by the end of this year or so, right now we’re just doing dispatch by phone. But the first priority for us is to add more cars.”