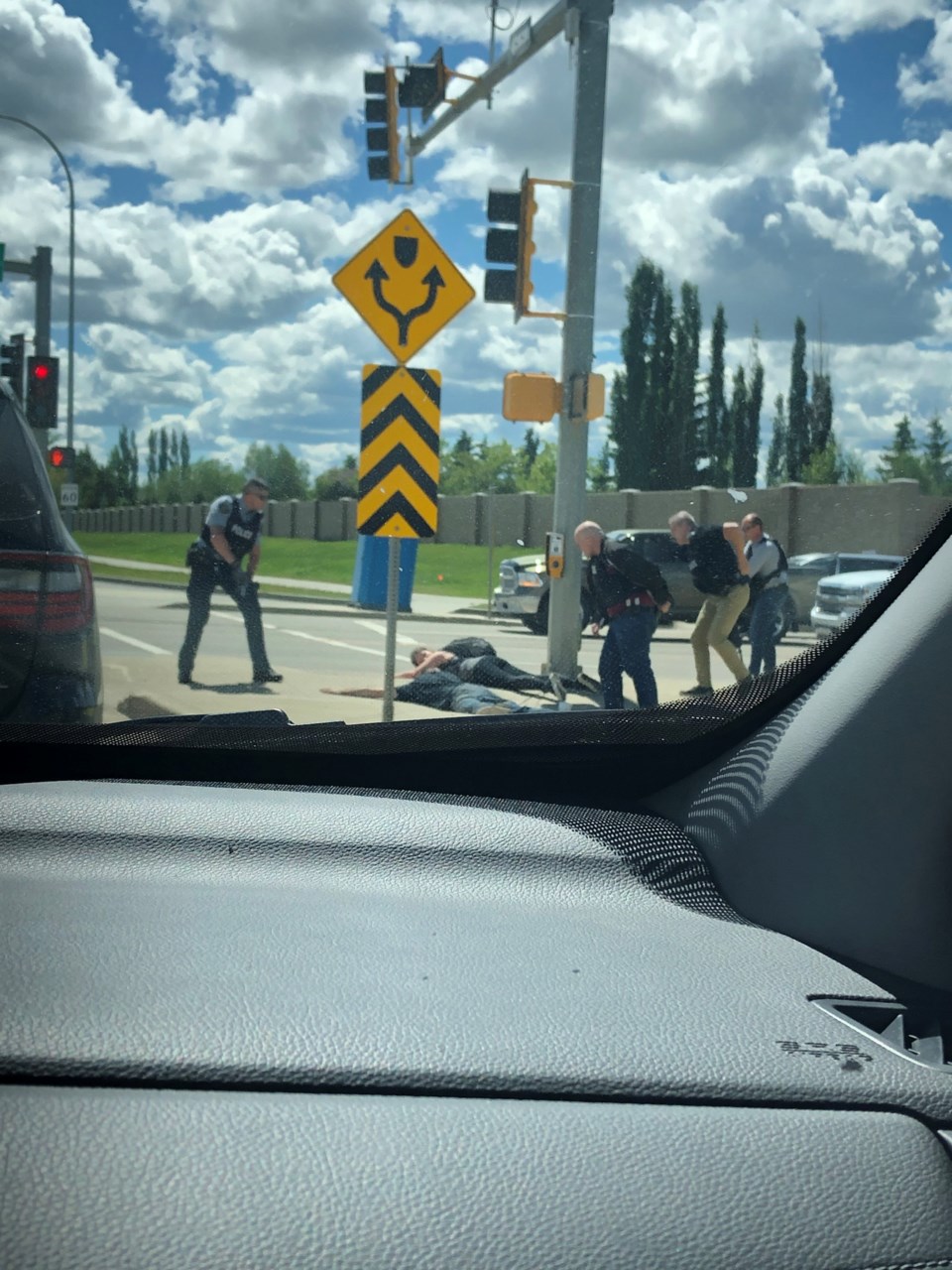 RCMP arrest three individuals at the corner of St. Albert Trail and Villeneuve Rd. The suspects face a total of 45 criminal charges from an armed carjacking near Morinville on Tuesday, June 16. LAREDO STRAWBERRY-NAULT/Photo
An armed carjacking in Sturgeon County last week triggered a police response that ended with the takedown of three suspects in the St. Albert Walmart parking lot.

Laredo Strawberry-Nault, 19, was driving from Morinville to St. Albert when he pulled up to a red light on the corner of St. Albert Trail and Villeneuve Road, where the arrest was happening.

“Two guys were standing at the crosswalk beside Walmart. They’d ditched their vehicle in the parking lot and they were trying to get away,” Strawberry-Nault said. The former St. Albert Catholic High student added that within 15 to 20 seconds, officers came rushing in from every direction. The arrest took place at 12:44 p.m.

“Everything took place in one light cycle,” Strawberry-Nault said. “It was shocking and overwhelming, how quick the police were to react, and how professional they were. They knew exactly what they were doing.”

Morinville RCMP said they charged David Lawrence Desroches, 32, and Kalob Joshua Kochanowsky, 20, with 16 criminal charges each, while Sheyene Victoria Bruno, 28, faces 13 criminal charges. These charges include pointing a firearm, robbery with a firearm, dangerous operation of a motor vehicle and failing to comply with a condition of release. Kochanowsky has also been charged with possessing methamphetamine.

The arrest happened after Morinville RCMP responded to a 911 report of a carjacking in Sturgeon County. Police said three suspects stole a truck at gunpoint from a rural property owner.

RCMP recovered two pickup trucks, a flatbed trailer, a farm tractor, a ride-on mower, a firearm, ammunition and two grams of methamphetamine. Morinville RCMP said in a press release a St. Albert citizen had located the firearm involved, a loaded shotgun that had been discarded.

Just prior to the takedown along St. Albert’s busiest road, Samantha White, a stylist at Chatters Hair & Beauty Salon across from Walmart, was on her lunch break and spotted a number of police vehicles converging in the parking lot.

“Cops were coming from three directions. They were tailing a truck with lights on and (the driver) wasn’t stopping,” White said.

“I didn’t know what it was, but it was definitely something more than stealing something at Walmart. There was quite a lot of action going on,” Biddiscombe said.

Witness accounts of the arrest also popped up on Facebook, with users praising the efficiency of the RCMP or expressing nervousness at seeing the amount of armed officers and cruisers involved.

RCMP media relations Cpl. Ron Bumbry told the Gazette the trio who were arrested are well known to police.

“The way we define ‘well-known’ is they have had police interaction within the past two or three years,” Bumbry explained.