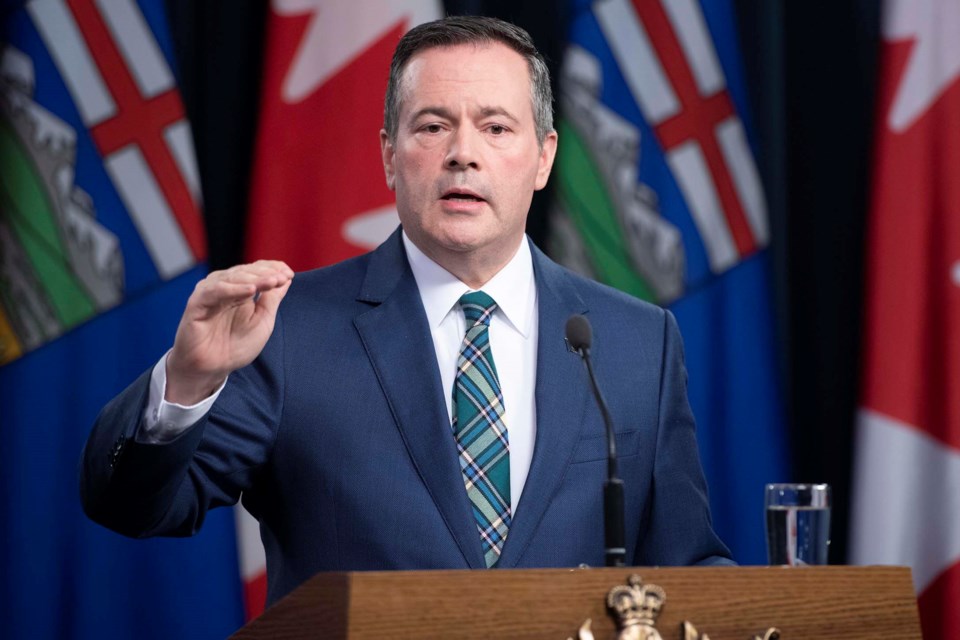 Alberta Premier Jason Kenney announced the province’s new COVID-19 reopening plans May 26. The plans, should they roll out as predicted, would see all pandemic-related health restrictions removed province-wide as early as July, with some switching off by June 1.

“Today we are truly nearing the end of this thing, where we leave the darkest days of the pandemic behind and step into the warm light of summer,” he said.

Kenney said the province had “crushed” the recent spike in COVID-19 cases after three weeks of new restrictions, with active cases now half of what they were earlier this month. Hospitalization rates had fallen, and just over half of the province was at least partially vaccinated (i.e. received one of two shots) against COVID.

Kenney outlined a three-step reopening plan based on hospitalizations and vaccination rates.

Kenney said church services would be able to host crowds of up to 15 per cent of their fire code limit (instead of just 15 people, period) as of May 28.

On June 1, the cap on outdoor gatherings would rise to 10 people from five. Retail store capacity would rise to 15 per cent, up from the current 10. Restaurants could resume patio service for up to four people per table, and hair salons and other wellness services could reopen by appointment only.

Stage Two would kick in two weeks after 60 per cent of the province was partially or fully vaccinated and hospitalizations dipped below 500. This stage would allow for outdoor gatherings of up to 20 people, indoor and outdoor dining groups of up to six per table, and outdoor festivals and concerts of 150 people. Gyms could resume indoor fitness classes, and hair salons could allow walk-in appointments. Grandstands, libraries, and other indoor recreation centres could reopen at one-third capacity. The work-from-home order would be lifted, and sports could happen without restrictions.

Kenney said the province was set to meet Stage Two requirements in a few days, which means these measures would likely kick in mid-June.

Stage Three would see all pandemic-related health measures — including mandatory indoor mask use and the ban on indoor social gatherings — eliminated two weeks after 70 per cent of Albertans had received at least one dose of COVID-19 vaccine. Kenney predicted this would happen in early July, allowing for K-Days and the Calgary Stampede to proceed as normal.

“We’re finally getting back to normal, and I think it means the best Alberta summer ever.”

Danielle Smith, general manager of the Sturgeon Valley Athletic Club, said she was excited about the reopening plans, but still wanted some clarity on Stage Two.

“It tells us we can have indoor fitness, but we don’t know if it’s masked” or if there would be caps on class sizes, Smith said.

Smith said the last three weeks of restrictions have been tough at the club, as just six people could use their outdoor gym per hour under them. The club planned to restart its outdoor fitness classes June 1 and hoped to resume indoor training by mid-June, but would keep its online classes and outdoor gym going until the fall, as not everyone would be comfortable heading back to the gym.

St. Albert Minor Baseball Association president Kurtus Millar was also excited about the reopening plan. He said he had been worried players would miss another year of competitive play due to COVID, which would send some athletes into college-level sports after two missed seasons.

“I’m just excited for the kids. It means they’re going to play some baseball this summer.”

Millar said he and the rest of the Baseball Alberta executive would meet June 1 to figure out if they would host games and tournaments this summer, adding that families were pushing for both. They might also need to extend the season.

“It’s a bad combination of doing things fast and doing them wrong,” he said.

Talbot said Alberta had set out all the ingredients it needed to spark a fourth wave of COVID, as it was lowering restrictions at a time when few people were fully immunized against it and more infectious variants were on the rise.

“The new variant from India is actually fairly capable of infecting people who have had a single dose,” Talbot said, with the latest research suggesting one shot of vaccine was just 33-per-cent effective against it (two doses were about 90 per cent effective).

While he acknowledged the risk from the new variants, Kenney said Alberta was approaching “population immunity” for COVID once you accounted for those who were fully vaccinated (nine per cent) and those with immunity from past infections (about 14 per cent), adding it would be “unprecedented” to see a surge in hospitalizations with 70 per cent of the population partially vaccinated against the disease.

Talbot noted that researchers believe regions reach herd immunity (the point at which COVID-19 is unlikely to spread wildly) when 70 per cent of a population was fully vaccinated, and that he had not seen any evidence that this could be achieved with partial vaccinations.

Talbot said the province was “flying blind” with this plan as it relied on hospitalization trends, which take four to six weeks to reflect actual COVID-19 spikes, and the plan had just two weeks between each stage. Alberta’s test positivity rate was also still at about eight per cent, which the World Health Organization says means our contact tracing was not working effectively.

Talbot said the province should go with a slower reopening, as other provinces have done, and not allow potential super-spreader events like the Calgary Stampede. He advised Albertans to get their second shots as soon as possible.

Kenney advised all Albertans to get vaccinated, adding that second doses should become more common in late June.

“If you don’t like the current restrictions, and who does, the best thing you can do to end them is to get vaccinated.”