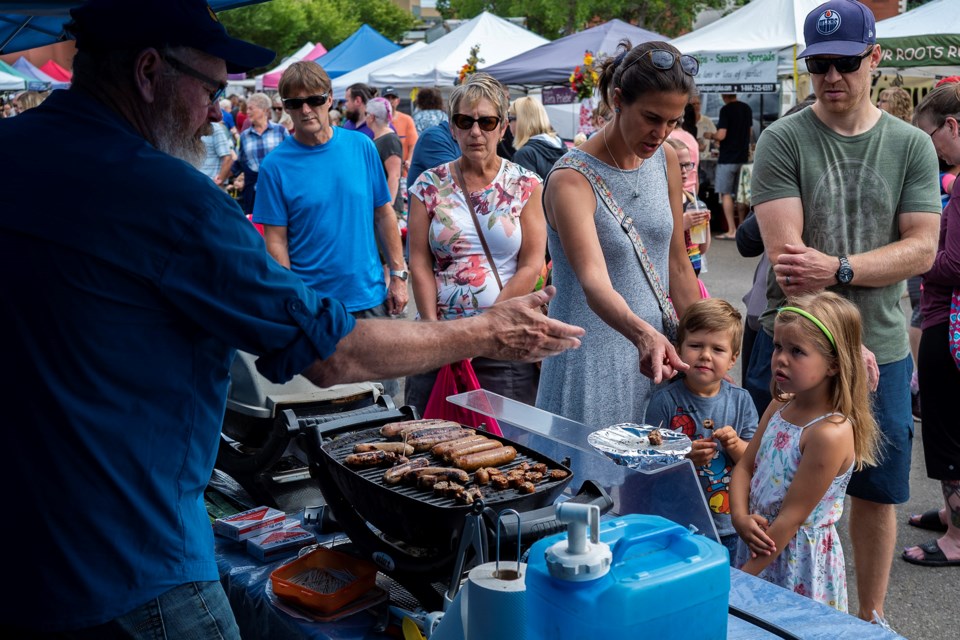 Ron Hamilton of Sunworks Farms offers up free samples at the 2019 St. Albert Farmers' Market. Hamilton will be returning to the market at Servus Place this year, although vendors are no longer allowed to give out free samples.

The excitement is ramping up as last-minute preparations are underway for St. Albert Farmers’ Market's official opening on Saturday, June 6.

Part of the buzz started after St. Albert and District Chamber of Commerce officials changed the location from the city’s downtown core to Servus Place's parking lot (400 Campbell Rd.).

Due to the COVID-19 pandemic, this year's market is divided into two separate smaller outdoor markets. Each market has 84 stalls, hosting 110 seasonal vendors and 120 weekly vendors. Typically, past markets held 270 booths.

“In order to be able to control the number of patrons in the market at any given time, we had to move to a location that we could completely fence. Our market is substantially smaller this year due to having to space out each vendor booth to accommodate a minimum of six feet between each vendor,” wrote St. Albert and District Chamber of Commerce president Jennifer McCurdy in an email.

The one-way traffic will have directional arrows to help create an efficient flow and lineups outside the markets have markings every six feet.

“We will be asking everyone to use hand sanitizers upon entering and exiting the market. Patrons will be asked to shop with purpose. Masks are recommended but not mandatory at this time. There are food trucks on site but there won’t be any seating. All children’s activities ... have been suspended as per AHS guidelines. Buskers are not permitted,” McCurdy stated.

To prevent any viral transmissions, the Sturgeon County businesswoman will cover her products with plastic. In addition, she has purchased a plastic shield to further enforce the two-metre distance.

“Shoppers will tell us what they want and we’ll bag or box it,” said Busenius. After each purchase, she will quickly sanitize any area in her booth touched by a shopper.

Her new philosophy is: “You touch, you buy.”

Despite any extra expenses Busenius has incurred due to the new normal, she is relieved and happy the market is opening.

“Instead of having 3,000 people milling about at any given time, there will probably be 150. But I’ve had a large amount of shows that have cancelled and my income is cut in half. It’s good to see the markets opening.”

Market organizers also offer curbside pickup. For this additional service provided by the chamber, vendors are charged $3 per order. The charge was instituted to pay for additional staff hired to carry out the service.

“My customers would probably call me and if there’s someone with me at the booth, one of us could take it out. But for people that sell a lot, like Kuhlmann’s Market Gardens, it becomes expensive. I would say start at $3 and put a limit on it," Busenias said.

Eric Chen, owner of Peas on Earth, an organic vegetable farm in Sturgeon County that handles both small and large volumes, said that fee would be fine for an order of $30 or more.

"But if someone only wants a small order, it wouldn’t be worth it for us. It costs us and it’s more work.”

Instead of allowing customers to touch and select their own products, the long-time vendor plans to offer pre-bagged vegetables and he encourages payment transactions using credit and debit cards.

Nathan Flim, founder of The Fort Distillery, a Fort Saskatchewan operation that produces vodka, gin and several types of brews, noted that the St. Albert market was pivotal in boosting his product – in large part due to the free sample drinks he distributed. This year, AHS rules prohibit taste-testing.

“It will definitely make it harder to sell, because at markets you try before you buy. But I understand the rules," said Flim.

He plans to erect a bungee cord barrier in front of his booth so shoppers cannot walk to the back where his products sit.

“Customers are encouraged not to pick up bottles and if you look under 25 we will ask for I.D. Because of AGLC rules we won’t offer curbside pickup.”

Shoppers would often follow their noses to Sunworks Farms’ booth just to watch Ron Hamilton grill his organic sausages. The familiar open-air aromas will be missed this year as he is also prohibited from offering bite-size samplers.

“I’m using other methods to communicate with my customers so we can actually talk. You have to try something new due to the disruption. This is a new world and you have to adapt, and we’re going to,” Hamilton said.

As for the curbside pickup charge, he noted it is a huge undertaking for market organizers.

“It takes more work than expected. As a whole, I’m excited to see how they do the whole market. I’m confident the St. Albert management team will do a good job. They’re progressive, fair and they work to keep customers safe,” Hamilton said.

The market runs successive Saturdays from June 6 to Oct. 10. A vendor list is available on the website.