So you've just taken a nice, long, hot shower at home and now you're wondering where all your money has gone. The answer is right at your feet. Hot water takes energy and money to make, and you just dumped a whole bunch of it down the drain.
0
Sep 23, 2015 12:00 AM By: Kevin Ma 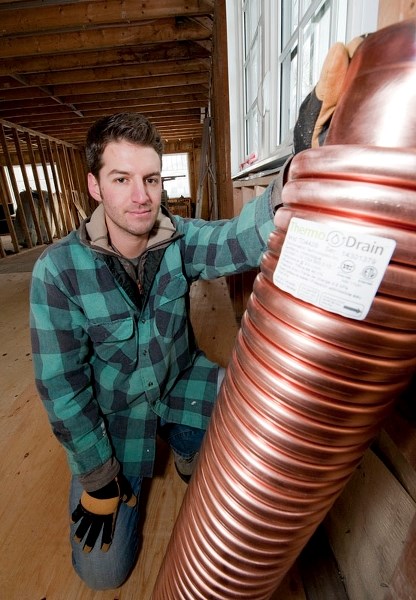 RECOVERING HEAT – Former St. Albert resident Stuart Fix shows off the drain heat recovery device he plans to install as part of his renovation of his new home in Edmonton in this 2014 photo. Systems such as this one let homeowners recover about 20 per cent of the heat in their drain-water

So you've just taken a nice, long, hot shower at home and now you're wondering where all your money has gone.

The answer is right at your feet. Hot water takes energy and money to make, and you just dumped a whole bunch of it down the drain.

"If you can put a heat recovery exchange in the way, you get some percentage of that back," he says.

"They pay for themselves quickly and they will almost never wear out," he says.

"We're putting them in all of our homes."

A basic drain water heat recovery system is a big, straight copper pipe with a smaller pipe coiled tightly around it, Morrow says. It's about a metre long, costs about $400, and takes about 30 minutes to install.

"It's a fairly easy do-it-yourself project."

As hot wastewater runs down the system's straight pipe, the copper conducts heat out of it into freshwater in the coiled pipe, warming it to 20 to 40 C. The now pre-heated water goes to your hot-water tank until it's ready to use.

These systems can recover 20 to 25 per cent of the energy in your drain water, says Stuart Fix, a former St. Albert resident and engineer with ReNü Building Science who has one of these units in his home. That works out to a savings of about eight cents of natural gas per shower.

Morrow says a typical family of four could recover about 19 per cent of their annual hot water heating using a basic system. That works out to about $32 saved a year with natural gas heat ($120 to $160 with electric heat) and a payback time of about 12.5 years (or about three with electric).

That family would also prevent about 224 kilograms of greenhouse gas emissions per year, Fix estimates, assuming natural gas heating and 0.21 kg CO2 per kWh of gas.

The great thing about these systems is that they require no maintenance, Amerongen says – you put them in and forget about them.

"The only thing you'll notice is a decrease in the amount of money you'll spend on gas for hot water."

Basic drain-heat systems are great for showers and sinks but bad for baths and dishwashers, as they only work when you have wastewater going out at the same time that freshwater is coming in, Morrow notes.

Advanced systems get around this issue using a pump and sensors. The pump sends water through the outer coil whenever it detects hot drain-water and stores the warmed water in a holding tank, letting the system recover up to half of your drain-water heat. These systems cost about $1,100.

Super-advanced systems also have a heat pump that chills freshwater to 1 C before it enters the outer coil, Morrow continues.

"A heat exchanger always works on the difference in temperature," he explains, and you can pull back up to 75 per cent of the heat in your wastewater by cooling the freshwater to create a bigger temperature difference.

Morrow cautions that these super-advanced systems are generally too complex to bother with in homes, as they cost about $5,000. They're great for condos and apartments, however. One such system he put into Fort McMurray's Stony Mountain Plaza met about 74 per cent of the building's hot water needs in 2012.

You can get drain water heat systems from plumbing wholesalers, Amerongen says. Natural Resources Canada's website lists them by size and efficiency.

Make sure you have easy access to your drain stack before you buy, Fix adds; if it's buried in a wall, it's probably not worth it to install a drain water heat system. The stack should be vertically oriented, as these systems work best vertically. You also only want one drain stack, as you need one drain-heat system per stack.

Also check the location of your hot-water-using appliances. The drain water heat system won't catch any of the water from drains in your basement, as those bypass the drain stack and go straight to the sewer, Fix notes.

Morrow notes that you have to get rid of air and water in your home anyway, so you might as well recover the heat in them where possible.

Do so, and you can make sure that your drains drain your sinks and tubs instead of your wallet.

Climate change is happening, and it's being driven in most part due to our carbon emissions. Our carbon challenge is to reduce those emissions so that the climate of tomorrow is better than the one we have today. <br />The Carbon Challenge will profile different ways you can shrink your carbon footprint and (usually) save money every second week. <br />Got a carbon question? Drop me a line at [email protected]