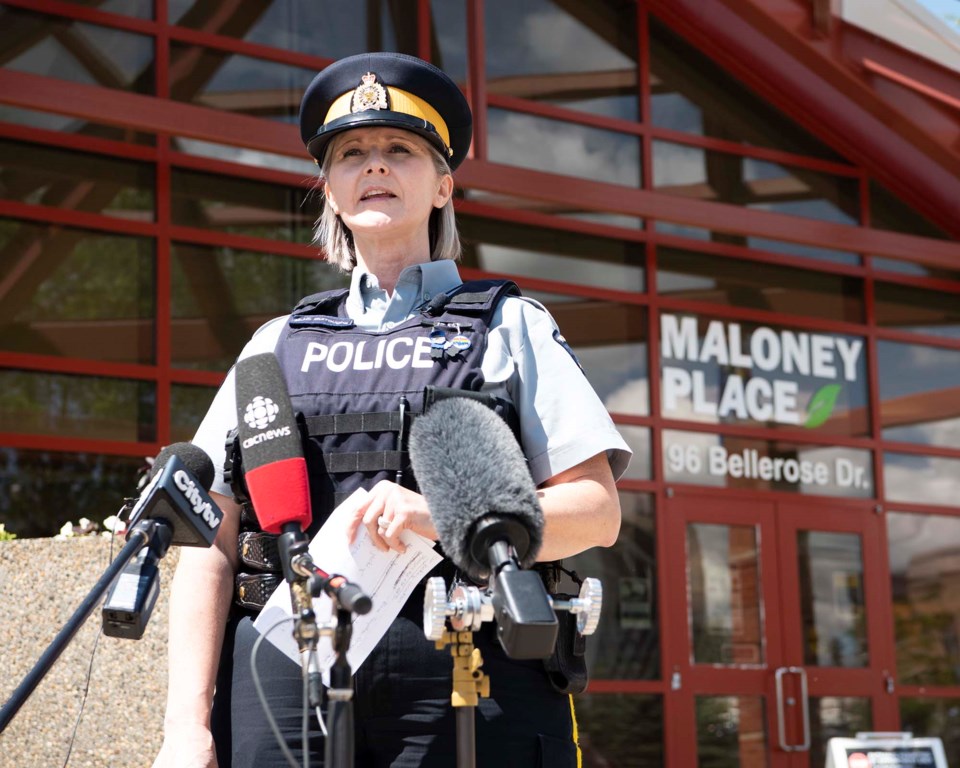 CARJACKING UPDATE — St. Albert RCMP Cst. MJ Burroughs speaks to media about a series of carjackings in St. Albert on Wednesday at the city's RCMP headquarters (Maloney Place). Two males were in custody, with a third, possibly armed, suspect still at large at the time of the briefing. KEVIN MA/St. Albert Gazette

St. Albert RCMP are seeking the public’s help in tracking down a suspect connected to a string of armed carjackings that sent all city schools into semi-lockdown.

RCMP received reports about a series of carjackings in St. Albert early today, Cst. MJ Burroughs said at a press conference this afternoon.

Three suspects hijacked a blue Toyota Corolla on the road near St. Albert Trail and Sturgeon Road at about 8:45 a.m., Burroughs said. Police then got reports of two attempted carjackings in downtown St. Albert before hearing of a successful one on Marion Crescent, which is close to St. Albert Catholic High. The suspects used a handgun or replica handgun in all four incidents.

Burroughs said police took this step as a protective measure because the carjackers appeared to be armed and moving around town, making them concerned for the schools. The hold-and-secure order was lifted at about 10:30 a.m.

RCMP recovered the Toyota on Madison Avenue and arrested two males, Burroughs said. Police have yet to lay charges. There were no injuries or shots fired during the carjackings or arrests.

Burroughs said the third suspect was still at large and may be armed, as police had not recovered the suspected firearm.

“We don’t believe that individual is in St. Albert,” she said, and police believe the suspect has gone into the Edmonton area.

Also unaccounted for was the second stolen vehicle: a 2007 red Jeep Compass, Alberta license plate number CHV-5953. Burroughs asked anyone who saw this vehicle not to approach it, as its driver may be armed, and to instead call police.

Burroughs said the investigation into the carjackings was ongoing. Anyone with information on these crimes should call Crime Stoppers at 1-800-222-8477 (TIPS).